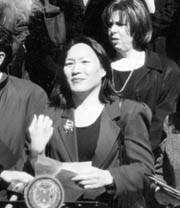 Roughly two months after the city’s human rights law was expanded to ban discrimination against transgender people, the New York Association for Gender Rights Advocacy (NYAGRA), the group that marshaled that legislation through the City Council, is shattered by conflict with rival factions battling over ownership of the group’s name and financial assets.

“We had a good run,” said Donna M. Cartwright, who served on the board of the original association and recently resigned from the board of its rival group. “We lasted for roughly three and a half years.”

More than any other organization we were responsible for Intro. 24 which was the largest, single victory for transgender people in the U.S. in terms of the number of people covered.”

The dispute began earlier this year when one faction, led by NYAGRA co-founder Pauline Park, of the eight-member board voted to dismiss Jamie Hunter, the association’s only paid employee, and to end the association’s relationship with Housing Works, the AIDS housing group.

The Park faction believed that Hunter’s work was increasingly being directed by Charles King, a Housing Works co-executive director, and that some of her time was spent on political lobbying. Tax exempt groups may not lobby.

“There was some evidence that Charles King had acted to intervene improperly in NYAGRA’s internal affairs particularly with regard to personnel matters and there was a feeling among several members of the board that we would not be able to determine our own policy until we severed that relationship,” Park said.

Matters came to a head in early February when an ad in LGNY, now Gay City News, announcing a demonstration against the Empire State Pride Agenda (ESPA), the statewide, gay lobbying group, incorrectly included NYAGRA as an endorser.

“I was concerned about it,” Park said. “I called Jamie to find out who had placed the ad. I could not get an honest answer.”

That demonstration was organized, in large part, by Housing Works, which attacked ESPA’s support for the Sexual Orientation Non-Discrimination Act, or SONDA. That proposed state bill does not protect transgender people and ESPA has been criticized for pressing legislators to pass it without changing the language.

In a five to three vote the NYAGRA board ended its relationship with Housing Works two weeks later. A second vote, four to three with one abstention, sealed Hunter’s dismissal. Housing Works and Hunter were informed by letter on February 21.

“There was a core block of us who became very clear that we were in a similar place,” said Stuart Chen-Hayes, a board member. “We were incredibly clear about our fiduciary responsibility to protect NYAGRA.”

Members of the rival faction agree on the facts, but they cite a different cause for the conflict –– Pauline Park. She was accused of searching the NYAGRA computer that Hunter used and, eventually, removing it from the Housing Works office. While employers may legally take such actions, the move was seen as heavy-handed and typical of Park’s style.

“We had a conflict about how the organization was run internally,” Cartwright said. “Some of us felt that one of our leading members –– Pauline Park –– was acting in an unaccountable way and doing things without board authorization.”

Melissa Sklarz, who left the NYAGRA board two years ago, but remained a member, also said that Park was the problem.

“I found Pauline Park very difficult to deal with,” Sklarz said. “I found her to be inflexible and arrogant.”

Hunter and Sears did not respond to calls seeking comment.

Park said the bylaws did not support the membership’s actions.

“The membership could elect the board and it could also amend the bylaws,” she said. “In no version of the bylaws does the membership have the authority to overturn decisions of the board with regard to personnel matters and legal contracts.”

While the association members fought, Housing Works and the original NYAGRA were battling over money. Over the past two years, the association had received $80,000 from three foundations and roughly $50,000 of that was unspent.

After the association ended the fiscal sponsorship, King wrote NYAGRA on March 7. The AIDS group would return the funds, but only after keeping Hunter on the payroll through the end of March, paying her two months severance and retaining $5,000 to cover the “increased cost of State Unemployment Insurance cost as a consequence of NYAGRA’s decision to terminate Ms. Hunter.”

King told Gay City News that “Jamie was recruited, hired by the NYAGRA board,” that he directed her work on only one occasion, and that she was paid with NYAGRA funds, but she was still a Housing Works employee. His group would be sued if Hunter went to court and Housing Works had to protect itself.

“Housing Works has a legal obligation to its employee and it has the same legal liability just as it would with any other employee,” King said.

In March, he wrote that, because the association was not tax exempt, any remaining grant funds would be returned to the foundations. The original NYAGRA signed a fiscal sponsorship agreement with the Latino Commission on AIDS on March 14. Meanwhile, Housing Works continues as the fiscal sponsor at the request of the new board.

“We have a sponsor’s agreement,” King said. “The new board has asked that we continue as the fiscal agent and we have agreed to do so.”

Park said that Housing Works had no right to direct the disbursement of the NYAGRA dollars.

“When we terminated the fiscal sponsorship agreement Housing Works lost all authority over the funds,” Park said.

For some, NYAGRA’s future actions remain in doubt.
“We don’t know, we’re not sure,” Sklarz said. “We’re waiting to see how this thing plays out.”

Park said that her group was alive and functioning. It has a four-member board and 50 paid members.

“We’re moving forward,” she said. “The legitimate board of directors of NYAGRA is moving forward with the advocacy work for which we founded the organization.”

This article originally appeared in the 21-27 June 2002 issue of Gay City News.