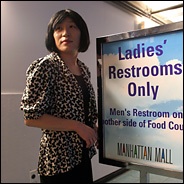 When Pauline Park watched Mayor Michael R. Bloomberg sign an amendment toughening the city’s anti-discrimination laws two years ago, she never expected to become one of its first beneficiaries.

But yesterday, a complaint filed by Ms. Park – a co-chairwoman of the New York Association for Gender Rights Advocacy, which helped lobby for the amendment to the New York City Human Rights Law – became part of the first settlement issued under it. The amendment forbids discrimination based on sexual identity whether or not it differs from a person’s biological sex.

administered by the city’s Commission on Human Rights, found that people working for Advantage Security, a New York security guard company, discriminated against Ms. Park when they demanded to see her identification after she used a women’s restroom at the Manhattan Mall in Herald Square last April.

She said that she had been having lunch with friends and was “taken aback” when five guards – four men and a woman – stopped her after she used the restroom a second time that day. The first time occurred without incident, she said.

“They encircled me in a very menacing and hostile stance,” Ms. Park said.

“The female security guard demanded to know, ‘Are you a man or a woman?’ ” Ms. Park said. “I said to her that I identify as a woman. And she said, ‘One of my colleagues thought you were a man.’ ”

The settlement also covered a second incident involving the same company at a different location.

Last March, an Advantage Security guard asked Justine Nicholas for identification after she came out of a women’s restroom in a Manhattan office building where she was taking the Graduate Record Examination.

Like Ms. Park, Ms. Nicholas was born male but identifies herself and lives as a woman.

Under the terms of the settlement, Advantage Security will adopt and enforce a policy allowing people to use bathrooms “consistent with their gender identity,” said Michael D. Silverman, executive director and general counsel for the Transgender Legal Defense and Education Fund, which represented the two complainants before the commission. The company will also pay $2,500 to each complainant.

Ms. Park said she was pleased with the settlement.

In a statement released by the Transgender Legal Defense and Education Fund, Ms. Nicholas said that she had been “humiliated” by the incident and that the case would “increase the public’s awareness of transgender people’s needs.”

The commission’s chairwoman, Patricia L. Gatling, said that the settlement “sends a message that discrimination in any form will not be tolerated in our city.”

This article originally appeared in the 2 April 2005 issue of the New York Times.