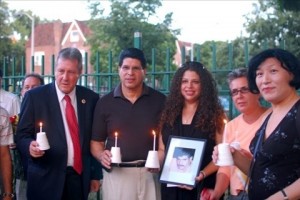 On 2 July 2010, members of the family of Julio Rivera were joined by nearly 70 people who gathered to remember the murder of the young gay Latino who was murdered outside P.S. 69 in Jackson Heights. Queens is the most ethnically diverse county in the United States, and Jackson Heights is the most demographically diverse neighborhood in the borough.

At the vigil, there were people representing the full diversity of the borough, all expressing solidarity with the family of Julio  Rivera as well as with the family of Edgar Garzon, whose mother was there to commemorate the brutal murder of her gay Latino son. The vigil took place on the corner of 37th Ave. & 78th St., named Julio Rivera Corner in honor of the gay Latino victim of a horrific hate crime.

As vice-president of the board of directors of Queens Pride House, I spoke on behalf of the board and staff of Pride House, the only LGBT community center in the borough, offering condolences to Julio’s family as well as congratulations on the work done since his murder that has moved Queens forward into an era of greater understanding and acceptance.