Gay Bishop Roils Anglican Unity
Can a schism be avoided?
By Pauline Park

AUGUST 14, 2003. The recent confirmation of V. Gene Robinson, an openly gay man, as bishop of New Hampshire generated the kind of global front-page headlines and media scrutiny usually reserved for the election of a president of the United States.

The fallout from the election may well lead to a schism in the worldwide Anglican communion of 77 million, one of the world’s largest Christian denominations. It could also radically change the way many Protestant Christians define themselves.

Culture or Religion?
Sexual orientation and gender identity are one of the main fault lines of the contemporary culture wars, particularly what academic theorists call the sex/gender binary. That is the division of the world by sex into two camps, men and women, with gender expression being exclusively masculine for men and feminine for women, and marriage between a masculine man and a feminine woman the only acceptable form of coupling.

The homosexual and transgendered are thus viewed as dangerous challenges to societies constructed around the heterosexual norm. “Practicing homosexuality is culturally and legally not acceptable here,” said Bishop Lim Cheng Ean, leader of the Anglican church of West Malaysia, commenting on the election in an interview with The Guardian of London last week.

However, the difficulties most Protestant churches have in dealing with sexual orientation and gender identity go beyond the social and cultural to the very origins of Protestantism. 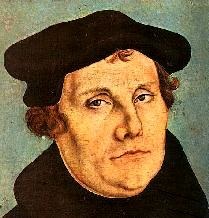 Blame It On Luther
In the Reformation, Martin Luther based his view of the Christian faith on his challenge to the authority of the Catholic Church to interpret scripture. He asserted that it was not church sacraments, much less priests or popes, who were central to Christianity, but rather, the gospel of Christ, as embodied above all in the New Testament.

“The righteousness of God is revealed through the Gospel… through which God justifies us by faith through grace and mercy.” By creating a doctrine focused primarily on the text, Luther was the progenitor of Protestant fundamentalism and his theological writings helped inspire the practice of the literal interpretation of “unerring” scripture.

The election of a gay bishop not only challenges the conservative wing of the Episcopal Church and of the Anglican communion because it disrupts their heterosexist societies, but because it seems to contradict the literal interpretation of the Bible that has evolved into the foundation of conservative Christian faith.

Joining the Battle — Again
“We cannot be in fellowship with them when they violate the explicit scripture that the Anglican Church subscribes to,” said the Very Reverend Peter Karanja, provost of All Saints Cathedral in Nairobi, Kenya, told the New York daily, Newsday. “We’d counsel they reconsider the decision [to confirm Robinson]. It’s outrageous and uncalled for.”

The main problem with advocates of literal interpretation is that they undercut their absolutist stance by continually picking and choosing which passages to interpret literally. Even the most casual reading of scripture unearths not only condemnations of homosexuality, including the infamous passages in Leviticus that label it an “abomination”, but even more passages condoning slavery, among them verses in the books of Timothy, Titus, Peter, Ephesians, and Colossians.

The Leviticus-citing conservatives that resort to explanations of historical and cultural context with regard to slavery, are hard-pressed to explain why context is irrelevant when discussing sexual orientation. The selectivity of Christian conservatives with regard to Biblical proscriptions on homosexuality is what leaves them vulnerable to charges of being motivated purely by homophobia.

The debate over Bishop Robinson’s election and the role of openly lesbian, gay, bi, and transgendered people is particularly intense because it further undermines the traditional relationship of the Episcopal Church and the Anglican communion to scripture itself, and, by so doing, also raises the overarching issue: what it means to be a Christian church in the early 21st century.

This is a question every mainstream Protestant denomination is wrestling with, from the Presbyterians to the Lutherans to the Methodists, and even the Baptists.

Anglican Future
In this debate over fundamental issues of self-definition, it is difficult to envision any compromise for the Episcopal Church that would preserve the unity, much less the harmony, of a worldwide Anglican community which is already stretched thin, not just between conservative and progressive elements within each country, but between the global North (mostly Europe and North America), and the global South (Latin America, Africa, and underdeveloped Asia).

Because the U.S. Episcopal Church is functionally autonomous, the Archbishop of Canterbury, as spiritual leader of Anglicans everywhere, has no formal authority to intervene. Episcopalians and Anglicans who reject Robinson’s election as bishop have only one choice, which is to cut ties with their sister church in the United States.

A schism now in the Anglican communion over Bishop Robinson’s election will not be the last over the place of openly lesbian, gay, bi, and transgendered people in Protestant Christianity, a debate tied to that about the nature of the denominations themselves.

Pauline Park is a transgendered woman of Asian birth and an activist in New York City.

This article originally appeared on the website of The Gully on 14 August 2003.