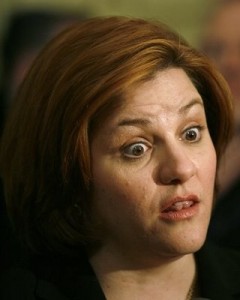 When her fellow New York City Council Members elected her Speaker in January 2005, Christine Quinn became the first openly lesbian or gay person elevated to that position. For many in the LGBT community in New York, the symbolism was clear: Quinn’s election signified the community’s coming of age. But the scandal now enveloping Speaker Quinn is becoming an issue for the LGBT community in New York as well.

“City Council Speaker Christine Quinn’s office hid millions of taxpayer dollars by allocating grants to phantom organizations as a way of holding the funds to dole out political favors later — bogus bookkeeping that is the subject of city and federal probes,” Frankie Edozien reported in the New York Post on April 3. Granted that the Post is a right-wing homophobic mouthpiece for Australian media magnate Rupert Murdoch. But it is not just the Post that is asking tough questions of the Speaker; it is also the entire New York media, including the New York Times, the New York Daily News, Newsday (the leading daily on Long Island), and the local network affiliates.

And it is also Gay City News, the leading LGBT weekly in New York. “It is crucial… that the full details are spelled out at the earliest possible date,” GCN insisted in an editorial in its April 10 issue, calling the Post’s revelation of the slush fund “a stunner.”

“More troubling is the fact that 24 percent of the distributions in fiscal year 2007 went to Quinn’s district, though… many of the recipients, including the LGBT Callen-Lorde Community Health Center and the American Folk Art Museum, serve a citywide constituency,” the GCN editorial continues.

Many in the LGBT community have applauded Quinn for using her position as the second most powerful person in city government to help fund the LGBT Community Center and many other LGBT community organizations — many of them based in her own district — the third Council district, which includes Greenwich Village and Chelsea.

“Is this a gay issue?,” GCN asks, pointing to “the symbolic role Quinn plays in our community” and concluding that “When, as expected, she runs for mayor next year, she will not get every LGBT vote, but it would be the rare queer New Yorker who would not in some sense feel she is carrying the aspirations of all of us on her shoulders as she enters the field. Christine Quinn has brought a compelling story of achievement by an out lesbian to New York’s public life. Putting this matter quickly and convincingly behind her is something we should all be insisting on.”

Indeed. Questions will now inevitably be asked as to whether those LGBT community organizations were funded through the scheme that has now come under investigation and that may even result in criminal indictments, and it is all the more important that the slush fund scandal now engulfing the first openly gay Council Speaker not taint the the LGBT community as a whole.

Chris Quinn has established a close working partnership with Mayor Michael R. Bloomberg — widely rumored to be possible vice-presidential running mate for either the Democratic or Republican nominee — and her position as a superdelegate and as the New York City LGBT community’s most prominent supporter of the presidential candidacy of Hillary Clinton means that the emerging scandal could have national implications.

This piece originally appeared as a blog post on VisibleVote08.com on 10 April 2008.