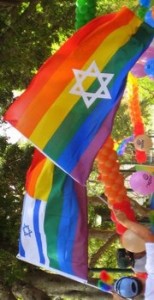 It was with some shock that I discovered my name on a list of ‘LGBT anti-Israel hate organizations’ on a Facebook ’cause’ page called ‘Queer Support for Israel.’ First, I do not hate Israel — though I have serious issues with the brutal, illegal and immoral Israeli occupation of the Palestinian territories. Second, I’ve been called many things in my life, but I’ve never been called an organization, nor am I one. Third, I couldn’t find any identifiers on the page to indicate who put me on this list of supposed ‘Israel haters.’

Only later did I discover the source of this ‘information’ about me: a ‘public relations professional since 1994’ named Scott Piro who advertises the professional services he provides as including social media, public relations and copywriting to “an eclectic range of clients” — including Caroline Kennedy, Sarah Ferguson (the Duchess of York, presumably), Merrill Lynch, and Tylenol, among others.

Tylenol is exactly what you’ll be reaching for when you read his blog post entitled, “Pinkwashing, Whitewashing, Brainwashing” (3 July  2011). “What helped was realizing I was being bullied,”  Piro writes of anti-occupation activists. “I use my real name, while most of these bloggers & tweeters attack me anonymously,” he declares sanctimoniously.

I don’t think it’s at all hyperbole, then, to say that it is the height of hypocrisy for Scott Piro to put up an anonymous Facebook page with no identifiers that labels organizations — and in my case, a lone individual — as ‘LGBT anti-Israel hate organizations’ without any attempt to provide those organizations with an opportunity to respond.

As of this writing, there are 22 organizations listed as ‘LGBT anti-Israel hate organizations,’ plus ‘Pauline Park – gender rights advocate (US),’ with a link to paulinepark.com. I do not recall ever having met Scott Piro, and he has certainly made absolutely no attempt to contact me to confirm his suspicion that I’m an enemy of the State of Israel — all very Nixon-esque or even McCarthy-esque.

Also on Piro’s ‘enemies’ list are Queers for an Open LGBT Center (QFOLC), of which I’m a co-founding member, as well as the Toronto-based Queers Against Israeli Apartheid (QuAIA); Piro hasn’t  yet gotten around to putting on the list the New York City Queers Against Israeli Apartheid (NYC QAIA), of which I am also a co-founding member; but he does cite NYC QAIA in his blog post. While I do not wish to speak for anyone else, no one I know of in QFOLC or QAIA ‘hates’ Israel, and I can say with certainty that none of the members of either group is ‘anti-Semitic’ by any definition of the term. In fact, probably at least half of the members of QFOLC and QAIA are Jewish, as are probably half the members of the Siege Busters Working Group, which Piro calls the ‘catalyst’ for his ‘newfound pro-Israel activism.’ 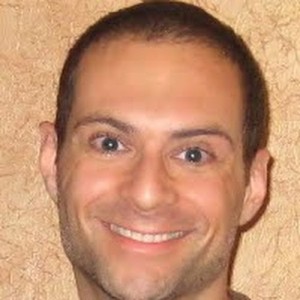 Piro tells us that the controversy swirling around the New York City LGBT Community Center — which I’ve documented in my own blog post (“Israeli/Palestinian conflict breaks out at the NYC LGBT Community Center“) (to date, the only comprehensive account of the affair) — prompted him to begin blogging and Facebook-ing about Israel/Palestine.

Piro gives an ostensibly comprehensive history of Israel/Palestine in under six paragraphs, confessing that “from the seventh to the sixteenth centuries AD, the area’s history becomes very confusing.” Perhaps the better term here would be ‘confused,’ at least as Piro tells that history, as he gets basic facts wrong and seems to deliberately distort others. Just to cite one such example, Piro declares that “There were both Jews and Muslims in Palestine during this whole 1200 year period, but there never was an Arab nation-state in the area; there was only ever a Jewish nation-state.” Well, of course, that’s true insofar as the modern Arab national states were the creation of the British and French colonialists who dismembered the Ottoman Empire after defeating it (along with Germany and Austria-Hungary) in World War I. What we know as Syria, Lebanon, Jordan and Iraq — as well as the British-ruled Palestine (under a League of Nations Mandate until 1948) — were the result of lines drawn in the sand by the British and French in the secret Sykes-Picot agreement of 1916 that they drew up before the end of the war to dismember the tottering Ottoman Empire after its subsequent defeat. But there certainly were Arab states that included the area now under Israeli control, including the Ummayad Caliphate (661-750) and the Abbasid Caliphate which succeeded it (both, like the Ottoman Empire, polyglot conglomerations).

After announcing the startling discovery that there was no state (in the modern sense) called ‘Palestine,’ Piro then concludes — based on the same rigorous historiographical methods and analysis — that “the LGBT pinkwashing phenomenon is the new anti-Semitism.” Piro’s evidence for this sweeping claim? A quote from the first “Scream” movie in which a character declares, “Well, you can only hear that ‘Richard Gere/gerbil story’ so many times before you *have* to start believing it.”

When it comes to the controversy surrounding the LGBT Community Center’s ban on the Siege Busters and QAIA, Piro demonstrates the same woeful ignorance of the facts as he does in recounting the history of  Israel and Palestine. In his blog post, Piro writes that he “followed the whole story [of the Center’s expulsion of the Siege Busters and then of NYC QAIA] from Israel.” On that page, Piro includes a photo from Duncan Osborne’s report for Gay City News (“Critics of Israeli Occupation Occupy Center Lobby,” 6.8.11) of the June 8 NYC QAIA meeting/sit-in in the lobby of the Center. Piro includes a photo from GCN in his blog post, with the caption, “Pauline Park addresses an unauthorized meeting of Queers Against Israeli Apartheid held in the lobby of the LGBT Community Center on June 8.” 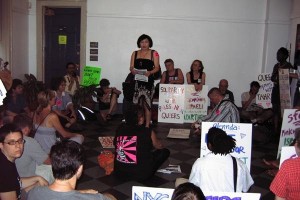 So the mystery is finally solved: Scott Piro labeled me an existential threat to the State of Israel based on one photo and accompanying photo caption in Gay City News. “The above image is from that sit-in, and it scares me,” Piro hyperventilates. “I see hate. I surmise my feelings are identical to the Jews of 1930s Germany, who saw demonstrations against them. This kind of speech — hate speech — isn’t protected. ‘Free Palestine’ is code for KILL THE JEWS,” Piro shrieks.

Had Scott Piro contacted me, I could have sent him the text of the statement that I was asked to read at that June 8 meeting, in which we demanded that the Center reverse the ban on QAIA and the Siege Busters and affirm the principle of freedom of speech — hardly what anyone would call ‘hate speech.’

But based on that one photo and news story — a rather slender reed of information to begin with — Piro concluded that I and my colleagues in NYC QAIA were hell-bent on the destruction of the State of Israel and the extermination of the Jewish race. Such weird paranoia is so ridiculous, of course, that one simply has to laugh, but such is the irrational hysteria that has gripped Zionists (LGBT and non-LGBT alike) in New York and throughout the United States as well as in Israel at the mere suggestion that Palestinians — including LGBT/queer Palestinians — deserve basic human rights. Had Piro bothered to contact me, I could have told him that I support the existence of the State of Israel; my opposition is to the brutal, illegal and immoral occupation of the Palestinian territories, a foreign occupation that contravenes every principle of human rights and international law of which I am aware. But such subtleties are beyond the comprehension of hysterical ultra-Zionists like Scott Piro; for them, the faintest criticism of Israeli government policy is tantamount to a declaration of “Kill the Jews~!” It is no wonder that the ‘peace process’ is all but dead, given the intense pressure on the Obama administration coming from the American Israel Public Affairs Committee (AIPAC) — arguably the most powerful lobby in Washington — as well as the Jewish Community Relations Council and so many others. AIPAC, JCRC and their confederates in the Israel lobby label anyone with the slightest bit of concern for human rights as allies or dupes of Hamas and libel the courageous Jewish Americans and Jewish Israelis who stand up to the powerful Israel machine on Capitol Hill and the right-wing government of Benjamin Netanyahu as ‘self-hating Jews.’ In such circumstances, it is no wonder that the Obama administration timidly takes its direction on foreign policy from AIPAC.

Closer to home, I and my colleagues in NYC QAIA will continue to speak out against the human rights abuses committed on a daily basis by the Israeli Defense Forces (IDF) and other organs of the state of Israel and I and other members of QFOLC will continue to advocate for an end to the unconscionable and unjustifiable ban on NYC QAIA and the Siege Busters Working Group.

Scott Piro, Michael Lucas, Stuart Applebaum, AIPAC, the JCRC, and their confederates may try to slander, silence and bully into submission anyone who stands up against human rights atrocities committed by and in the name of the State of Israel, but I for one will not be silenced. As a transgendered woman of color committed to social justice, I will continue to do the important work of bringing about peace and justice for all — including Jews and Arabs, Israelis and Palestinians, and everyone who lives or hopes to live once again in the land between the Jordan River and the sea.