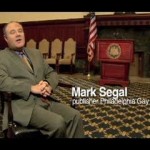 Israel’s campaign of ‘pinkwashing’ — a campaign to use Israel’s supposedly good record on lesbian, gay, bisexual and transgender (LGBT) rights to try to justify the brutal and illegal  Israeli occupation of the Palestinian territories — has now enlisted the support of Mark Segal, the publisher of Philadelphia Gay News. PGN published an editorial (“Israel, the gays and Equality Forum,” 3.15.12) written by Segal in the newspaper this week that justifies Israel’s continued massive human rights abuses against the Palestinian people — LGBT and non-LGBT — based on the unsubstantiated claim that Palestinian society is monolithically homophobic and the entirely false claim that Israel is a haven for gay refugees from the West Bank and the Gaza Strip.

Troy Masters is publisher of Gay City News and was one of 16 members of  the first US LGBTQ delegation to Palestine, which I also joined, in January. Masters challenged Mark Segal on his editorial, to which Segal responded by e-mail on March 16, writing,

“In the 1970 & 80’s LGBT delegations visited Cuba and began to support the Cuban Government.  What they did not know at the time was that gay people were being beaten, harassed and jailed on a regular basis, and in the 80’s AIDS concentration camps… For such a ‘high level’ group, the group seems very misinformed,” said Segal about the first LGBT/queer delegation from the United States to Palestine, which Masters and I were a  part of in January.

“Mark, nothing the Israelis are doing inside the internationally recognized Palestinian lands or to the Palestinians who live there can be defended. As for homophobia, Palestinians are much More open than you suggest in comparing them with Cubans of the 1980s.  Writing us off as academics is silliness. Israel is 1940s Missisippi at best. And the worst homophobia I ever encountered was in Jerusalem at the wailing wall where I saw a rabbi push a transgender woman away and spit in her to the delight of dozens…and I was there alone. The much despised supreme court decision allowing for recognition of gay marriages performed elsewhere is in sharp contrast to how Israel refuses to recognize marriage of Israelis who marry Palestinans.  Even children of such marriages are toxic level guests of Israel until they are forced to return to the lands israel wants the world to believe does not exist. You know this yet you don’t address it…”

Segal is a major power player in the LGBT community in Philadelphia and has used his position as the publisher of the only weekly newspaper in the city to advance his own position of considerable power within the political class of Pennsylvania’s largest city. Segal’s defense of the designation of Israel as ‘featured nation’ of Equality Forum 2012 is itself indefensible. Malcolm Lazin, the millionaire founder and executive director of the Equality Forum and another major power player in the state’s LGBT community, is using this year’s event and the opportunity to showcase Israel to bring in major donations from big-money donors and big-money interests while at the same time cozying up to the government of Benjamin Netanyahu, the most right-wing prime minister in Israel’s history.

There is no indication in the editorial as to whether Segal has ever even been to the West Bank or the Gaza Strip or has any real understanding of the daily humiliations and brutality that the Israeli Defense Forces (IDF) and Israeli settlers subject Palestinians to. But  the PGN editorial is yet one more indication that the Israeli government is becoming increasingly concerned about the rising tide of international disapprobation of the apartheid regime that the State of Israel is in the process of constructing, a regime that a single misguided and misinformed editorial in a gay newspaper in Philadelphia cannot obscure. In the end, the truth will out, and the dirty little secret about Israeli apartheid will come out no matter how sophisticated a pinkwashing campaign the Israeli government mounts within the LGBT community and outside it.

Pauline Park was a member of the first US LGBTQ delegation to Palestine in January 2012 and is a co-founding member of the New York City Queers Against Israeli Apartheid (NYC QAIA).