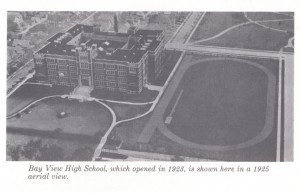 When I graduated from Bay View High School in 1978, I left Milwaukee for good, never to live there again. But while there are now fellow alumni from the class of 1978 in all of the 50 states, the bulk of them stayed close to home, with 667 of them remaining in Wisconsin, according to a popular website’s June 2012 report:

The report doesn’t include anyone living overseas, and I don’t know of anyone from the class of ’78 who is living abroad; but I do know of one alumnus living in Washington, D.C., which oddly enough is not included in the sketchy little report. While there are members of the class of ’78 in every state, only California (with 27 members), Florida (with 30), Illinois (23), Arizona (13) and Texas (13) have more than 10 alumni each; Georgia, Michigan and Minnesota have ten each and North Carolina has nine. I’m the only one in New York, which is a bit surprising, given that New York is the fourth largest state and that New York City is the largest city in the country.

But while two members of the class of ’78 are now as far away as Alaska and two more are now in the middle of the Pacific Ocean in Hawaii, the most striking thing about my class is that the overwhelming majority decided to stay in the land of snow and cheese (as I’m fond of calling my home state). This website doesn’t say exactly where in the Badger State these 667 alumni are, but my guess is that most are in Milwaukee or the metropolitan area.

Is this typical of high school graduating classes? I’d need to do some research to see whether or not the average high school class is more far flung than mine, but only a portion of the BVHS class of ’78 has scattered to the four winds; most have stayed very close to home. In relation to my graduating class, I may be one of the outliers, having never returned to Milwaukee except to visit after leaving in August 1978, and then having moved to Madison and subsequently to London.  After three years in Madison and two in London, I then moved to Chicago, then downstate to Champaign-Urbana, and while at the University of Illinois, spent two months in Berlin, six weeks in the Bavarian city of Regensburg, five months in Brussels and six months in Paris. After my last two years in Urbana, I moved back to the Chicago area for a year and then eventually to New York. Having lived in six different cities in three different states and five different cities in four different European countries, I now call Queens home. In just a few years, I will have lived in Jackson Heights longer than the 17 years that I lived in Milwaukee.

But my childhood and teenage years in the City of the 3 Bs (as I call it) — beer, bratwurst and bowling — were a crucially formative period of my life, including the three years in school at Bay View High, no matter how far from the south side of Milwaukee I have since roamed.

One thought on “Bay View High School class of 1978: where are you now?”