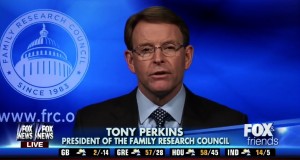 I was fascinated to see the most recent ‘prayer targets’ message from the Family Research Council. FRC “bills itself as ‘the leading voice for the family in our nation’s halls of power,’ but its real specialty is defaming gays and lesbians. The FRC often makes false claims about the LGBT community based on discredited research and junk science,” the Southern Poverty Law Center says of the religious right group founded in 1993 and run since 2003 by the abrasively bigoted Tony Perkins.

On March 20, FRC posted on the home page of its website a set of ‘prayer targets’ that included “Hobby Lobby; Israel; Transgender; Mississippi; Military Religious Liberty; SPLC; UN” (see full text below). FRC’s support for Hobby Lobby is hardly surprising, since this case currently being heard by the US Supreme Court is arguably the most important case to come before the court in terms of its implications for fundamentalist Christians to use the notion of religious freedom to exempt themselves from non-discrimination law. Also in the message is an attack on the Southern Poverty Law Center, also not surprising, given SPLC’s attempts to inform the public about FRC’s activities. FRC uses its March 20 message to attack the Maryland transgender rights bill, which it mischaracterizes as the ‘Maryland Bathroom Bill.’ FRC further informs its members that “a panel led by former President Clinton’s Surgeon General Jocelyn Elders has recommended that the Department of Defense allow transgendered persons to serve in the military.” And FRC calls on its members to ‘pray for the peace of Jerusalem,’ declaring, “Palestinian terrorists have demonstrated no inclination toward peace. Past presidents have used diplomatic pressure, but many say President Obama has bullied Israeli Prime Minister Benjamin Netanyahu by behaving rudely and demonstrating a sometimes thinly veiled, sometimes open hostility. Just over a week ago, President Obama told Prime Minister Netanyahu that if he did not move quickly to comply (with Secretary of State John Kerry’s artificial “April deadline” for an agreement), that the U.S. might not be able to protect Israel from the consequences.”

So there we have it – support for Netanyahu’s Israel, Hobby Lobby, and laws giving Christian fundamentalists the right to discriminate on the basis of sexual orientation as well as gender identity and expression go hand in hand with opposition to human rights for transgendered people and Palestinians. For Tony Perkins and his ilk, all Palestinians are terrorists conspiring to destroy the Biblically instituted state of Israel, while all transgendered women are nothing but rapists in drag lurking in ladies’ rooms. The bizarre lumping of all of these bigotries into one long rant is instructive about the world view behind these ‘prayer targets’ messages.

Of course, liberal Zionists will no doubt protest that one can support transgender rights and the Israeli government at the same time, as many do; but I think that Tony Perkins is actually onto something in his own crazy bigoted way, because the cause of justice for transgendered people both in the United States and in Israel/Palestine and everywhere else in the world is in fact part and parcel of the fight for human rights for all people everywhere, including Palestinians in occupied Palestine. So thank you, Tony Perkins, for connecting the dots for us so seamlessly~!

Now the Lord is that Spirit: and where the Spirit of the Lord is, there is liberty. 2 Cor 3:17

Dr. Erwin Lutzer has served as Senior Pastor of Chicago’s Moody Church since 1980. His three radio programs are broadcast across America and around the world. Author of 30 books, Lutzer, in his When a Nation Forgets God: 7 Lessons We Must Learn from Nazi Germany, documents shocking parallels between German society in pre-WWII Germany and America today:

In the People’s Republic of China in 1985, we asked a tour guide about freedom of religion. She replied, “The people in China have freedom of religion … they can be as free as they wish within their own minds!” Freedom of religion, then, has a new definition: we are free to practice our religion with our thoughts and perhaps in private conversation. In our own country one of our chief justices lamented that the court would have religion be like “pornography,” indulged only in private. When God is ousted from government, transcendent values are replaced by: 1) the raw use of power; 2) eroticism 3) arbitrary judicial rulings; and 4) the morality of personal pragmatism. Without overarching absolutes, the unity of society is threatened in the face of fragmentation and the quest for personal “rights.” Civility, long a characteristic of American life, has degenerated into name-calling and a desire to destroy the opposition… Political correctness has now affected the general culture and created an aura of censorship and a climate of fear…Malcolm Muggeridge said, “The whole structure is now tumbling down, dethroning its God, undermining all its certainties. All this, wonderfully enough, is being done in the name of the health, wealth, and happiness of all mankind.” [Under current federal] hate crimes [laws] certain classes of people receive special treatment…

From “Hate Crimes” the next step is for the courts to prosecute those who are deemed guilty of “Hate Speech” … stating an opinion that the government thinks should not be expressed… Europe has already lost the freedom to criticize Islam… As the state encroaches on our liberties, the spiritual “sphere” will continue to shrink, and our freedoms will be slowly curtailed. Statism, the notion that there is no power above the state to which it must be subject, will always work toward the diminishing of individual freedoms. No one is able to run and hide… Today our government has tools of manipulation that the world has never known before, from mass communication resources to faceless computerized bureaucracies to the ability to nationalize banks and companies… C. S. Lewis was a prophet when he wrote: “Of all tyrannies, a tyranny sincerely exercised for the good of its victims may be the most oppressive… We must face the possibility of bad rulers armed with a Humanitarian theory of punishment…. One school of psychology already regards religion as a neurosis. When this particular neurosis becomes inconvenient to government, what is to hinder government from proceeding to “cure” it? Such a “cure” will, of course, be compulsory; but … it will not be called by the shocking name of Persecution” (Erwin W. Lutzer, When a Nation Forgets God: 7 Lessons We Must Learn From Nazi Germany (2009); Ch. 1).

If you missed it last week see the brief video about Arlene’s Flowers. See also “Undeniable: The Survey of Hostility to Religion in America” and “Clear and Present Danger.”

Pray for the Peace of Jerusalem – Despite America’s many problems at home and abroad, Bible-believing Christians understand the importance of God’s covenant with Abraham to bless those who bless Israel and to curse those who curse her. Many believe America’s firm friendship and support for God’s covenant land have brought immeasurable benefit to our own nation. The Scripture repeatedly promises that when God regathered the Jewish people to the Promised Land, they would never be removed again. He warned hostile nations that harm would come to all who harm Israel or seek to divide their land (Joel 3:2; Zech 12:3). Yet, presidents, Republican and Democrat, have pursued a “two-state solution,” and have pressured Israel, together with the international community, to embrace a “land for peace” strategy… Meanwhile, Palestinian terrorists have demonstrated no inclination toward peace. Past presidents have used diplomatic pressure, but many say President Obama has bullied Israeli Prime Minister Benjamin Netanyahu by behaving rudely and demonstrating a sometimes thinly veiled, sometimes open hostility. Just over a week ago, President Obama told Prime Minister Netanyahu that if he did not move quickly to comply (with Secretary of State John Kerry’s artificial “April deadline” for an agreement), that the U.S. might not be able to protect Israel from the consequences. Some interpret that to mean the U.S. could no longer be counted on to use its veto power on the U.N. Security Council to support Israel. Even more troubling, a growing number of American evangelicals are pulling back from supporting Israel, some openly and others unwittingly joining with the terrorist-led Palestinian Cause. Israelis are no longer confident that they can count on the U.S., under Obama. The only certain supporters the Jewish people have had have been evangelical Christians. Now, some say, that support is eroding (see Obama Warns Netanyahu; Anti-Israel Evangelicals?; Where do Americans Stand?; U.S., Israel, Iran).

Transgender Bathroom Bills & Military Policy – The Maryland Senate has already passed and it is predicted that the Maryland House will pass what has come to be called the “Maryland Bathroom Bill,” HB1265. The bill, like many around the country, is supposedly intended to prevent discrimination against people who identify as transgendered and transvestite, but would extend a “right” to some biological males to appear nude before females (and vice versa) in bathrooms, locker rooms, and showers — invading privacy rights and unnecessarily exposing businesses to lawsuits. But this would do far more. It would mandate the employment of people who identify as transgendered in inappropriate occupations and disregard the fact that sexual conduct may in fact be relevant to employment. Under such legislation, employers in the area of education and childcare would be denied the right to refuse to hire transgendered individuals or persons undergoing gender reassignment treatment, even if they consider such persons to be inappropriate role models for children and youth. Meanwhile, a panel led by former President Clinton’s Surgeon General Jocelyn Elders has recommended that the Department of Defense allow transgendered persons to serve in the military. Reports are that President Obama may use his “pen and phone” to implement this change (see MD Bathroom Bill; Military Transgender Ban Faces Scrutiny).

Intervene, Lord, for your Law is being broken! We have defied your created order replacing your laws with confusion. Cause, we pray, legislators in Maryland and other states, and the Obama administration not to add confusion to confusion as they could do. Cause your people, led by their pastors, to say, “Enough is enough!” and to exercise their voices and authority as citizens and voters to stop these and similar lawless actions (Ex 23:2; 2Ki 17:17; Ezra 9:6-7; Ps 119:126; Jer 23:4; Jas 4:7; Jude 7).

Finally, more prayer issues: In last week’s Prayer Targets, I warned that activists would continue to use the tactics of misinformation and disinformation used to bully Arizona’s Governor into vetoing a bill passed to strengthen Arizona’s Religious Liberty Reformation Act. They are doing so, now, in Mississippi (MS was not on my list of vulnerable states). The news media, predictably, has entered the fray in favor of the anti-religious freedom activists. Pastors and Christian leaders from Mississippi and other states are signing a letter urging Mississippi legislators not to be fooled by these tactics. Urge your pastor to add his name. Pray, too, over religious liberty challenges in the Air Force (Fight & Flight); the DOD decision to continue consulting with the SPLC despite a new study showing that their “hate group” designations are political, not scientific (see also Hate Smears; Paid pro-homosexuality teacher training program); videos: United Nations v. the Vatican; Changing Faces of Persecution; Hobby Lobby-Conestoga Wood oral arguments before the U.S. Supreme Court Tuesday, March 25; Hobby Lobby Appreciation Day, March 29. Thank you for joining us in crying out to God in prayer for our nation!