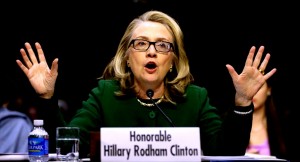 “A ‘Madame President’ would be a much-needed literal and symbolic victory for women across the country who are fed up with the stalled gender revolution in the States. Even if history tells us that female heads-of-states don’t always lead to more women-friendly policies, we would at least be given reason to hope. And hope, as our current President Barack Obama showed us, can go a long way. Well at least during an election,” writes Elissa Strauss (“Why Women Are Gaga for Hillary,” Jewish Daily Forward, 6 May 2014), who ends up stepping on her own lines with the contradictions in her little propaganda piece. First, as Elissa Strauss herself concedes, female heads of government (not ‘heads of state,’ as she puts it incorrectly) don’t necessarily lead to ‘more women-friendly policies,’ as I can attest myself having lived for 2 years under Margaret Thatcher. 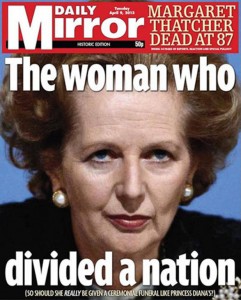 Not to mention the fact that it was Indira Gandhi — the first and so far only woman prime minister of India — who forcibly sterilized thousands of Indian women. And if you think Hillary’s election would suddenly transform women’s lives, eliminating discrimination & inequality at one stroke, just consider the actual impact of Obama’s election on the lives of African Americans and people of color apart from the obvious symbolic victory. Oh, and by the way, it would be ‘Madam President,’ not ‘Madame President.’ Madam Speaker of the NYC Council, Christine Quinn, did nothing to help women and was rejected by them in the 2013 NYC Democratic mayoral primary; one can only hope the same fate awaits Hillary~!