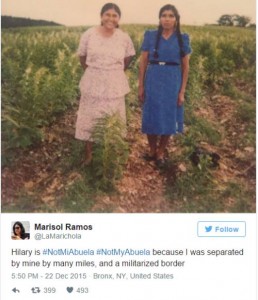 Hillary Clinton is not my abuela
by Pauline Park

“7 things Hillary Clinton has in common with your abuela” has provoked overwhelmingly negative reactions from Latinos and Latinos. Within hours of the posting of the absurd piece of #Hispandering on HillaryClinton.com on Dec. 21, outraged Latinas took to Twitter to denounce Hillary with the hashtags #NotMyAbuela and #NotMiAbuela, both ‘trending’ on Twitter throughout Dec. 22 and 23.

I’d like to offer my own response by talking about my own grandmother, who was a source of unconditional love throughout my childhood and youth and until her death at the age of 99. There are so many ways in which my grandmother was different from Hillary, but I’ll just cite seven, in keeping with her #Hispandering piece:

1) My grandmother grew up without a mother, having lost her mother when she was just a baby. Hillary Clinton grew up with both parents.

2) My grandmother she grew up in poverty in rural Wisconsin, in contrast to Hillary Clinton, who grew up surrounding by wealth and privilege in the all-white upper-middle-class Chicago suburb of Park Ridge. She went out into the field as a child, pitching hay and working the farm with her widower father. Hillary didn’t live on subsistence agriculture at any time in her life and never worked as a field hand on a small, struggling family farm; and she’s been a multi-millionaire for years now, controlling a foundation with assets in the billions. My grandmother died with no assets other than the radio she used to listen to Milwaukee Brewers baseball games (she was a huge fan of the great African American baseball player, Hank Aaron), her Bible, and a few pieces of costume jewelry. My grandmother never lived in the White House, though she did live in my parents’ house for many years, a small house with white aluminum siding and only one bathroom for six people.

3) My grandmother was the daughter of German immigrants from the part of Prussia that is now in Poland, unlike Hillary, who was born to an English-speaking WASP family of wealth and privilege; unlike Hillary, my grandmother did not speak English as her first language. Hillary went to Wellesley College — one of the elite Seven Sisters women’s colleges — and then Yale law school, one of the two or three top law schools in the country. My grandmother never had the opportunity to pursue formal education after high school, though she did volunteer to teach Native American schoolchildren on a nearby reservation in northern Wisconsin. 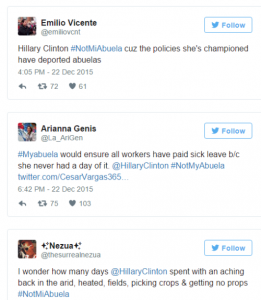 4) My grandmother never had any power over anyone other than her five children; as secretary of state, Hillary had power over the lives of many, directing US foreign policy for the first term of the Obama administration; Hillary may well be elected president of the United States, which would make her the most powerful person on earth. My grandmother died long before the Internet age, so she never had an e-mail account and unlike Hillary, never had a secret e-mail server in the basement of her mansion in Chappaqua from which she conducted State Department business in direct contravention of the rules and of all standards of ethics in government. My grandmother also did not approve the imprisonment, torture, and murder of thousands of pro-democracy activists in Bahrain and even of the doctors and nurses who attended to the wounded in hospital after the brutal crackdown by the despotic monarchical regime in Bahrain. Nor did my grandmother publicly approve of the Israeli murder of Furgan Dogan in the act of piracy committed by the Israeli military against the Mavi Marmara in international waters. Nor did my grandmother approve of the secret mass surveillance of US citizens, Europeans and others by the National Security Administration (NSA). Nor did my grandmother approve of the unprecedented deportation of undocumented immigrants by the Obama administration, or Obama’s killing of innocent civilians in Afghanistan and Pakistan by drone strikes — including the killing of Momina Bibi, a 67-year-old midwife and grandmother in rural Pakistan. My grandmother never approved of the murder of a grandmother.

5) My grandmother made mistakes but learned from them, unlike Hillary; my aunt once made a comment to me (I was an adult by this point) to that effect, saying that my grandmother had really mellowed and was quite a different grandmother than she was a mother; whether or not she ever acknowledged the mistakes she’d made with her children, my grandmother dropped the stern German matriarch role to become a loving, nurturing grandmother to all of her grandchildren; given her Christian fundamentalist background, she became quite astonishingly non-judgmental in her old age.

6) My grandmother died in poverty, being consigned by my aunts to a nursing home in the last decade of her life, having spent down all of her limited assets, living on Social Security and Medicaid. Hillary is a multimillionaire and she continues to control a foundation with billions of dollars in assets.

One thought on “Hillary Clinton is not my abuela”