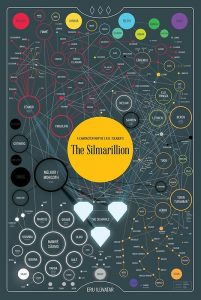 Tolkien & “The Silmarillion”: cultural influences & mythopoeia in the shaping of an epic
by Pauline Park

“The Silmarillion” is J.R.R. Tolkien’s longest work and arguably his most complex; it is the work that took Tolkien the longest to write and remained unfinished at the time of his death, to be put together as a single volume by his son Christopher Tolkien. “The Sil” (as some Tolkien fans refer to it fondly and casually) also covers an enormous amount of time in Middle Earth years.

As noted above, Christopher Tolkien pulled together “The Silmarillion” after his father’s death, bringing into one published volume what were really multiple manuscripts at various stages of completion. The table of contents in the published version of 1977 begins with the “Ainulindalë,” follows with the “Valaquenta” (the “Quenta Silmarillion”), and concludes with the “Akallabêth,” followed by the codocil, “Of the Rings of Power and the Third Age,” basically a summary of “The Lord of the Rings,” Tolkien’s most popular work and masterpiece.

The “Ainulindalë” is Tolkien’s Book of Genesis in which he tells the story of the creation of Middle Earth and it is the one part of the “Sil” that reflects Judaic cultural influence insofar as it is Tolkien’s rewriting of the Hebrew Old Testament’s first book. The most specifically Judaic element is the role of Ilúvatar as the supreme being, even if in some ways the pantheon of deities introduced in the “Ainulindalë” is also reminiscent of the pantheon of Greek and Roman gods and goddesses. Perhaps the most specifically Judaic (or more broadly ‘Judeo-Christian’) element here is the figure of Melkor; referred to as ‘Morgoth’ through most of “The Silmarillion,” he is the ‘Satan’ figure, the fallen angel who challenges the authority and power of Ilúvatar and the other Valar (gods), in a narrative told with some of the most exquisite language in any of Tolkien’s writings. 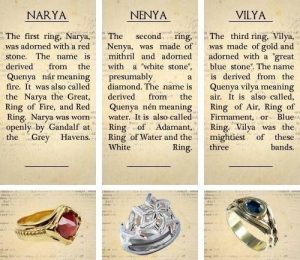 At the tail end of the published volume is “The Akallabêth,” which is Tolkien’s Atlantis story and which in that regard reflects Greek influence more so than any other part of the “Sil.” Reading the “Sil” for the first time, I was struck by the name of the last king of Númenór: whether Tolkien had this in mind, ‘Ar-Pharazôn’ sounds to me redolent of the title ‘pharaoh,’ with the hint of the Egyptian captivity of the ancient Israelites. The story of the downfall of Númenór ends the grand narrative of “The Silmarillion” insofar as “Of the Rings of Power and the Third Age” is little more than an artful summary of the plot of “The Lord of the Rings.”

But “The Silmarillion” proper is the “Valaquenta” or “Quenta Silmarillion,” which runs from page 25 to page 255 of the edition published by Houghton Mifflin in 1977 — in other words, the bulk of the text— and here the predominant influence is undoubtedly Germanic. In writing this difficult and complex work, Tolkien drew upon decades of reading of Old English, Old Norse and other Germanic language texts, among them “Beowulf,” the greatest of all Anglo-Saxon epic poems. Tolkien was also strongly influenced by his reading of the Old Norse sagas, two of which (“Njal’s Saga” and “Egil’s Saga”) I have read myself. It is also quite possible and indeed probable that Tolkien was familiar with the greatest battle poem in English, describing the Battle of Maldon in Essex in 991 which includes perhaps the single most famous line in Old English poetry:

“Hige sceal þe heardra, heorte þe cenre, mod sceal þe mare, þe ure mægen lytlað” (Thought must be the harder, heart be the keener, mind must be the greater, while our strength lessens).
As with “Beowulf,” the longest extant poem in Old English and by common consent the greatest poem and the epic from the Anglo-Saxon age, the sentiment here is one that captures the spirit of the warrior culture of the Anglo-Saxons as well as that of their cousins, the Vikings. “The Silmarillion” is suffused with such Germanic influences (‘Germanic’ here including Anglo-Saxon and Nordic as well as German) and it is worth considering some of the key aspects of the Germanic culture of the ‘Dark Ages’ that are conventionally defined as beginning with the fall of the Western Roman Empire in 476 CE until at least 1000 CE, when medieval Europeans sighed a huge sigh of relief to discover that the world had not ended as some had feared would happen a millenium after the birth of Jesus Christ. 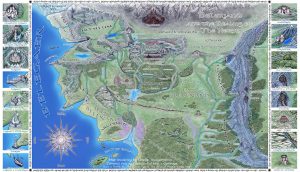 The core elements of the Germanic culture(s) of the Dark Ages that I see as crucial influences on the world of the Silmarillion are these:
1) Germanic paganism
To put it bluntly, “The Silmarillion” is a work steeped in Germanic paganism, the aforementioned Hebrew Old Testament influence on the “Ainulindalë” being the big qualification along with the Greek influence on the “Akallabêth.” It is the elves who are the dominant ‘race’ in the “Sil,” in contrast with LOTR in which the role of ‘Men’ as well as of hobbits is so prominent, and Tolkien’s conception of elves is steeped in pagan Germanic influence. One crucial element of the early medieval world that is strikingly absent from Middle Earth is the Christian Church; it is all the more remarkable given that Tolkien was himself a devout Roman Catholic; but the spirit of “The Silmarillion” like that of “The Lord of the Rings” (‘LOTR’ to Tolkien fans) is essentially pagan and pre-Christian or even non-Christian, despite the moving hand of Ilúvatar and the epochal struggle with Melkor, a.k.a. Morgoth, the fallen angel who is Tolkien’s Satan figure. Absent from “The Silmarillion” is an organized formal religion in any way similar to the Roman church that was a dominant influence in medieval Europe.
2) war and conflict
“The Silmarillion” is in a certain sense the story of one long war between Morgoth and the Valar and between Morgoth and the elves, and in that respect it reflects the prominent if not dominant role that war and conflict play in medieval Germanic epics, which can either be outright war or else various forms of lower level conflict. The “Akallabêth” which brings the narrative arc of the “Sil” to a dramatic conclusion is a particular kind of war culminating in Ar-Pharazôn’s war on the Valar that ends with the destruction of Númenór and the reshaping of the world from the Beleriand of the First Age into the Middle Earth of LOTR. 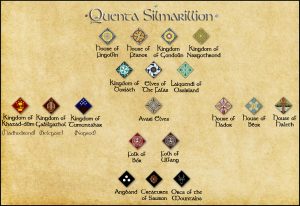 3) heroic masculinity
War making of the sort that is carried out by the elves throughout the “Sil” is inextricably linked with a heroic concept of masculinity that is at the core of Germanic culture as reflected in “Beowulf,” “The Battle of Maldon,” the Old Norse sagas and the Niebelungenlied as well as many if not most of the literature of the early Middle Ages. The very embodiment of heroic masculinity is Aragorn, who of course makes his appearance in LOTR and is the king referenced in the title of the third book of LOTR, “The Return of the King.” But both Boromir and Faramir in LOTR also reflect aspects of this concept.
4) honor & revenge
Inextricably linked with both war and heroic masculinity in “The Silmarillion” are both honor and revenge, themselves inextricably linked with each other. The concept of honor is central to Germanic notions of ‘manliness’ just as the were in the Roman world; and offense to honor in the Germanic culture(s) of the Dark Ages required a response, often in the form of a resort to arms. The Old Norse sagas in particular are full of vendettas and seem to be a kind of Nordic version of “The Godfather” set amongst the snow drifts of Iceland instead of sunny and warm Sicily. The seven sons of Fëanor — above all, Maedhros and Maglor — are driven by the sense that the honor of the house of Finwë requires that they recover the incomparable Silmarils created by their father Fëanor; his creation of the Silmarils and the long campaign to recover them are in fact the core of the narrative of “The Silmarillion” and justify the name of the book. 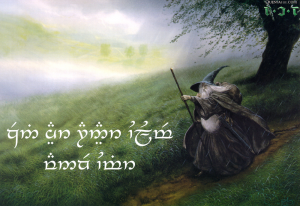 Last but not least, it is important to note the theme of ‘light vs. darkness’ that is central to “The Silmarillion,” which begins with the story of the creation of the world in the “Ainulindalë,” on page 19 of which Tolkien specifically and explicitly references ‘Darkness,’ which Tolkien says the Ainur “had not known before except in thought” before that moment. In chapter seven, Tolkien tells the story of Fëanor’s creation of the Silmarils, which capture “the light of the Trees, the glory of the Blessed Realm” (p. 67); in that sense, the long struggle between and among various parties including his sons to capture and recover these precious jewels is in fact a struggle over and between light and darkness. Of course notions of light and darkness are hardly unique to Germanic literature and are to be found in the literature of every society and culture; but Tolkien was almost certainly influenced by specifically Germanic cultural references to light and darkness in shaping the narrative of “The Silmarillion.” One of Tolkien’s favorite works, “Beowulf” is shot through with such references, as in line 1136 in which the anonymous author of the Anglo-Saxon epic refers to ‘the wonder of light’ (sēle bewitiað). In lines 1963-1966, the poet declaims, “Heroic Beowulf and his band of men crossed the wide strand, striding along the sandy foreshore; the sun shone, the world’s candle warmed them…”(Gewāt him ðā se hearda mid his hond-scole sylf æfter sande sǣ-wong tredan, wīde waroðas; woruld-candel scān, sigel sūðan fūs) (translation, Seamus Heaney). The great spider Ungoliant is a particularly interesting example of darkness in “The Silmarillion,” an awful creature who “hungered for light and hated it” (p. 73); she ”sucked up all the light that she could find, and spun it forth again in dark nets of strangling gloom…” 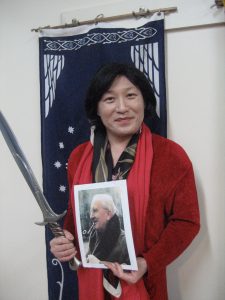 “The Silmarillion” is in some ways even more of an ‘epic’ in the strict sense of the term than is “The Lord of the Rings” insofar as LOTR’s action is compressed within the span of only decades, whereas the action of the “Sil” spans epochs from the creation of the world until the destruction of Númenór and the reshaping of Beleriand. The myriad cultural influences on the “Sil” are many, but as I would argue, it is Germanic paganism that is the overriding influence on this great work.