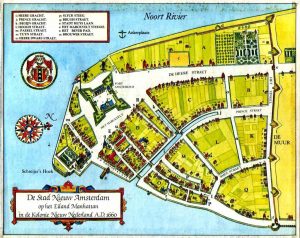 New Amsterdam was the first European settlement on the island of Manhattan, which the indigenous Lenape had settled long before the arrival of the Dutch. In 1664, a British warship sailed into the harbor and the Dutch surrendered without a shot being fired. Charles II renamed the city of New Amsterdam and the colony of New Netherland for his brother, the Duke of York; and the future James II of England’s title referenced the city of York in the north of England, which the Romans had called ‘Eboracum.’ 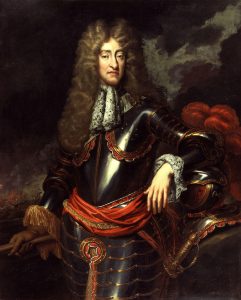 The etymology of the Latin word is not entirely clear; the Online Etymology Dictionary declares that the “city in northern England, Old English Eoforwic, earlier Eborakon (c. 150), an ancient Celtic name, probably meaning ‘Yew-Tree Estate,’ but Eburos may also be a personal name.” The website Viking.no has a very different explanation:

“To the Romans it was Eboracum. It is said that this name comes from the Celtic personal name, Eburos. For almost four hundred years the Romans kept a strong military presence in Eboracum, to help control the Celtic British tribes (especially the restless Brigantes to the west) and to provide reinforcements for Hadrian’s Wall in the north. The Romans built the first stone walls around Eboracum, so it could be defended. When the area was invaded and settled by the Angles, from the 5th Century onwards, it is said that they mistook ‘ebor’ for ‘eofor’, which in Old English meant ‘wild boar’. To this they added the Old English ‘wic’, giving the name Eoforwic. Eoforwic became the capital of the Anglian kings of Northumbria and, when the Anglo-Saxons were eventually converted to Christianity, it also became a centre for the new religion. The city fell to Scandinavian invaders in AD 866. The first part of the name was simplified to ‘jor’, perhaps a result of the Old English and Scandinavian languages being combined. The Old English ‘wic’ became the Scandinavian ‘vik’ and the settlement’s new name, Jorvik, emerged.” 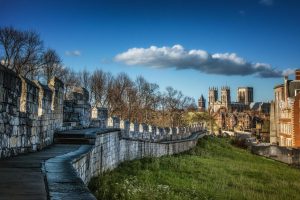 So does ‘Eoforwīc’ mean ‘yew tree estate’ or ‘wild boar settlement’ (‘eofor’ + ‘wīc’)…? The latter explanation sounds more persuasive to me; either way, given that ‘new’ in Old English would be ‘nīwe,’ ‘New York’ would be something like ‘Nīwe Eoforwīc’ in modern English; and either way, it’s up to you,  Nīwe Eoforwīc, Nīwe Eoforwīc~! 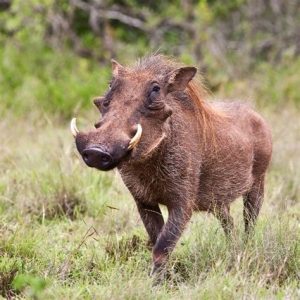