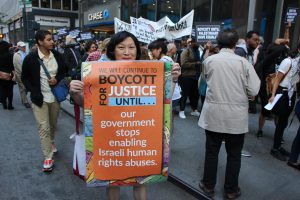 BDS & the New York State Freedom to Boycott Coalition
by Pauline Park
Andrew Cuomo was the most aggressively Zionist governor in the history of the state of New York and he aggressively opposed the movement to boycott, divest and sanction (BDS) Israel to free Palestine from Apartheid Israel’s illegal occupation. In 2016, as the state legislature was moving to pass legislation to ban BDS, Cuomo signed an executive order that requires state agencies “to stop doing business with and divest public funds from institutions and companies associated with the BDS campaign” (Casey Seiler, “Cuomo’s anti-BDS order faces backlash,” Times Union, 6 June 2016).
In response, members of the New York State Freedom to Boycott Coalition marched to Cuomo’s house in Mount Kisco on July 6 to protest the executive order, clearly an unconstitutional abridgment of New Yorkers’ freedom of speech and expression. “We will continue to stand for justice and support boycotts for Palestinian rights until the Palestinian people achieve freedom, justice, and equality. We refuse to accept Governor Cuomo’s attempt to silence us and we will continue to defy his Executive Order. He cannot repress our growing movement for Palestinian rights. We demand that he rescind this order immediately,” said Jane Hirschmann, a founding member of Jews Say No!, one of the groups that organized the protest.
Cuomo resigned in August 2021, forced out of office in a scandal involving his relentless sexual harassment of women working for the state of New York; some also held him responsible for the unnecessary deaths of at least 16,000 nursing home residents in the Corona virus pandemic and 40,000 New Yorkers across the state. But Cuomo’s departure has done nothing to slow down the Zionist machine’s drive to criminalize support for human rights for Palestinians living under Israel’s illegal occupation.
Now the New York State Assembly is currently considering legislation very similar to that pre-empted by Cuomo’s executive order (which remains in place) that would effectively ban BDS under state law. Assembly Member David Weprin introduced A.8271 in August; as of yet, it has no companion bill in the Senate; A.8271 would amend the retirement and social security law and the state finance law to impose consequences for boycotting Israel but also for doing business with Iran and Sudan. Those who are committed to human rights for everyone in Israel/Palestine and indeed around the world need to organize to defeat this pernicious legislation; Jewish Voice for Peace, Jews Say No!, New York City Queers Against Israeli Apartheid (NYC QAIA) and every member organization of the New York State Freedom to Boycott Coalition are committed to defeating anti-BDS legislation in order to secure full human rights for those living under illegal occupation in occupied Palestine.
Pauline Park is a co-founding member of New York City Queers Against Israeli Apartheid (NYC QAIA) and participated in the first US LGBTQ delegation tour of Palestine in January 2012.