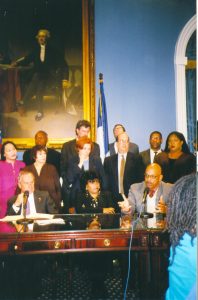 Eric Adams was elected mayor of New York City in November 2021 and was inaugurated in January 2022 after eight years of disappointments with Bill de Blasio, but there’s little indication that the new mayor will be any better than the old mayor; if Adams were serious and interested in what I as a member of the lesbian, gay, bisexual, transgender/queer (LGBTQ) community think, he could take these 10 steps to improve the lives of LGBTQ New Yorkers:

1 Mayoral appointments. Before he does anything else, he could restore a modicum of confidence in his leadership among LGBTQ people by firing Fernando Cabrera, Erick Salgado and Gilford Monrose, who are notorious for their homophobia and transphobia and whose appointments were condemned by the New York City Council’s LGBTQ Caucus in a statement on Feb. 21; the comments the mayor has made to date have satisfied no one I know of in the LGBT community; simply saying that they’ve ‘evolved’ or pointing to his own vote in favor of same-sex marriage recognition when he was in the New York State Senate does nothing to address the issue; I know many of the activists who have publicly protested these appointments and I can’t honestly imagine anyone being persuaded by what Adams has said about them to date.

2 Riker’s Island. Layleen Cubilette-Polanco was only 27 when the LatinX transwoman was found dead in solitary confinement on Riker’s Island in 2020; Bill de Blasio promised to close the largest municipal jail in the United States but did not get it done before he left office at the end of 2021; even with some form of ‘protective’ housing within Riker’s, it is still unsafe for LGBTQ people or anyone else, for that matter; Adams needs to close Riker’s permanently and turn it into something productive, like a museum or a cultural center; better yet, he should raze the entire facility and turn it into a wildlife sanctuary.

3 Defund the Police. Eric Adams ran on an anti-progressive agenda of actually increasing police power in the city; if he were serious about LGBTQ people — who are still subjected to police brutality by the New York Police Department (NYPD) — he would be defunding the police; what I mean by that (speaking here for no one but myself) is not complete defunding of the NYPD but making a start on defunding the police by cutting the department’s outrageously enormous budget, which in the fiscal 2022 was $5.42 billion; the actual budget is closer to $11 billion if one includes pensions and related personnel costs, making it larger than the budget of any municipal police department in the world and in fact larger than the military budgets of most foreign countries; despite the $195 million increase in funding over fiscal year 2021, crime has actually increased, so increasing the budget of the NYPD will do nothing to reduce crime.

4 Support bail reform & oppose rollback; support condom possession. Adams is pushing for a rollback of the significant progressive bail reform the state legislature enacted in 2020; he should be doing the opposite; despite the mayor’s claims that bail reform is responsible for the rise in crime in the five boroughs, there is not a shred of evidence to support this contention; in fact, crime rose far faster in Los Angeles, Chicago, Philadelphia and several other major American cities in 2021 than in New York City though none of those other cities (or their state legislatures) enacted bail reform during that period. And finally, the mayor needs to issue an executive order or directive specifically and explicitly prohibiting the NYPD from using the mere possession of a condom as evidence of supporting.

5 Support decriminalization legislation. Eric Adams needs to publicly and aggressively support legislation currently pending in the New York State legislature that would fully decriminalize sex work and oppose legislation that would only partially decriminalize it. S3075, introduced by Sen. Julia Salazar and A849 introduced by Richard Gottfried, Yuh-Line Niou and Ron Kim, would comprehensively decriminalize prostitution; Sen. Liz Krueger’s legislation would only partially decriminalize sex work (somewhat misleadingly referred to as the ‘Nordic model’); Adams should publicly and aggressively support S3075 and A849; while the mayor of course has no formal role in the state legislature’s legislative process, his support for this important legislation could be very influential in getting it enacted and enactment of it would have an enormously beneficial impact on the transgender community, given that the police often assume that all transwomen are engaged in sex work whether they are or not.

6 Shift funding from the NYPD to health care & social services and expand ‘Pride Centers’ in HHC hospitals. LGBTQ people are routinely denied access to health care and social services in this city despite the laws enacted by the City Council prohibiting discrimination based on sexual orientation and gender (defined to include gender identity and expression); transgendered people and transgender people of color in particular face the greatest impediments in accessing health care and social services. I’ve conducted hundreds of transgender sensitivity training sessions for government agencies, corporations, health care and social service providers and community-based organizations and I can tell you from direct personal experience that the City of New York is years behind where it needs to be to adequately serve the transgender community let alone effectively serve it. To cite just one example, I participated in discussions with senior staff at the New York City Health & Hospitals Corporation some years ago; they were very open to transgender sensitivity trainings, but in the end, they weren’t able to get funding to fund them and of course the good trainers in this city would not do transgender sensitivity trainings for free in a city that has a $90 million+ annual budget, nor should they be expected to do so. The Health & Hospitals Corporate (NYC HHC) now has six LGBT clinics (Bellevue, Jacobi, Gouverneur, Judson, Lincoln and Metropolitan); every HHC hospital in the city needs to have an LGBT clinic so that LGBTQ people can access health care without fear of discrimination in all five boroughs. Every HHC hospital needs to have a full-time paid LGBT liaison or ombudsperson on staff and HHC needs to have the budget to pay experienced trainers — especially those with transgender-specific expertise — to train all staff, including doctors and nurses as well as non-medical support and technical staff. HHC also needs to rework forms so that patients can indicate preferred names and pronouns that may not correspond to those on their government-issued identity documents.

7 IDNYC. The City of New York’s IDNYC card was introduced by Bill de Blasio’s administration, but the practical benefit for transgendered people was limited by the requirement that the ID bear the person’s legal name; if Eric Adams wants to help the transgender community, he should end this requirement so that the name on the IDNYC does not need to correspond to that on other government issued ID (such as the driver’s license and passport).

8 CUNY. The City of New York has been seriously underfunded for the last decade in good part because of Gov. Andrew Cuomo’s attempts to undermine it; if Eric Adams wants to strengthen CUNY and make it more LGBT-friendly, he should fund LGBT studies through the CUNY Center for LGBTQ Studies (CLAGS) and fund tenure-track positions in LGBT studies at CUNY colleges as well as expand services for LGBT students, faculty and staff at CUNY colleges.

9 NYS DASA & NYC DASA. Mayor Michael Bloomberg vetoed the Dignity in All Schools Act in 2004 but he New York City Council overrode his veto; however, the Bloomberg administration refused to implement the legislation intended to prohibit bias-based harassment in public schools. Gov. David Paterson signed the New York State Dignity for All Students Act (NYS DASA) in 2010 (9.13.10) and it went into effect in 2013 (7.1.13); since then, advocates calling on the New York City Department of Education (NYC DoE) to address the continuing serious problem of bullying and bias-based harassment in public schools have focused on the state legislation as the way to address this problem, as the state Dignity Act prohibits discrimination in public schools based on a comprehensive list of characteristics including sexual orientation and gender (defined to include gender identity and expression); what the legislation lacks is funding and if Eric Adams were serious about addressing bullying and bias-based harassment in city schools — which LGBTQ students continue to be subjected to — he would secure state as well as city funding for trainings to train faculty, staff and students in city schools that would specifically address LGBT discrimination and bias-based harassment, including trainings with transgender-specific content conducted by those with transgender-specific expertise so that this important legislation could be fully implemented on an ongoing and continuous basis.

10 Apartheid Israel. Last but hardly least, Eric Adams needs to acknowledge and publicly recognize the fact that LGBTQ Palestinians are suffering under Israel’s illegal occupation of Palestine just as heteronormative Palestinians are; and the mayor needs to repudiate the formal relationship Michael Bloomberg established with Technion-Israel Institute of Technology via Cornell University’s new campus on Roosevelt Island in September 2017. Adams needs to ban contact between the City of New York and the Israeli government and military and endorse the boycott, divestment and sanctions (BDS) movement to free Palestine from Apartheid Israel’s illegal and genocidal occupation; finally, the mayor needs to call on the International Criminal Court in the Hague to prosecute Benjamin Netanyahu, Naftali Bennett and all those who participated in and are continuing to participate in the ethnic cleansing of illegally occupied Palestine and above all the pursuit of genocide in Gaza.

Pauline Park is chair of the New York Association for Gender Rights Advocacy (NYAGRA), which she co-founded in 1998; she led the campaign for the transgender rights law enacted by the New York City Council in April 2002 and participated in the first US LGBTQ delegation tour of Palestine in Jan. 2012; she completed her Ph.D. in political science at the University of Illinois at Urbana-Champaign in 1994.