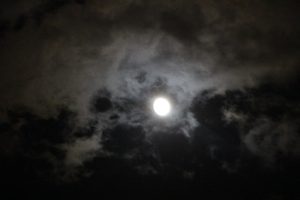 I have studied seven languages over the course of half a century; it was only when I lived in Brussels and Paris in 1991-1992 that I began to dream regularly in French; many years later, I revived my French in 2003 as a political statement in response to the rampant francophobia of Republicans in Congress and the Bush administration as a reaction to France’s opposition to the Iraq war. In 2015, I began studying Korean and then took Norwegian in 2016 and 2017; in 2018, I began reviving my long dormant German. It was over the course of 2017-2019 that I began to dream in various languages other than English, increasing in frequency over the course of 2019, as this record of speaking and sometimes singing in my dreams show:

I woke up from a dream in which I spoke the name of the German Lutheran hymn, “Wie schön leuchtet der Morgenstern” (How Brightly Shines the Morning Star), apropos of nothing.

I woke up from a dream in which I was singing “Die Rose, die Lilie, die Taube, die Sonne” (The rose, the lily, the dove, the sun) from Robert Schumann’s “Dichterliebe” song cycle; I was also playing the accompaniment on a small keyboard, but I could only remember “Die Rose, die Lilie, die Taube…” Op. 48, No. 3 is in fact one of my favorite Schumann songs & I sing & play it quite often.

I woke up from a dream in which I said ‘im Ruhrgebiet’ (in the Ruhr region) to someone who was a classmate in high school; Gwen Stellberg was in the same English and math classes as me and also in both the symphony orchestra and the chamber orchestra; the rest of the conversation was in English and we were considering which cities in Germany we could visit together (we were apparently already in Germany); we decided that Freiburg and Baden Baden were the most best bets.

I woke up from a dream in which I said ‘blessés,’ which means ‘wounded’ (plural) in French.

I woke up from a dream in which I said ‘sex personer,’ which means ‘six persons’ in both Swedish and Norwegian (spelled ‘seks’ in Norwegian); the next day, I told a friend about the dream and she said she thought it sounded like a pun on ‘sex persona.’

I woke up from a dream in which I said, “‘Mild und leise,’ the Liebestod from ‘Tristan und Isolde’…”

I was on a bus in San Francisco and suddenly realized it was an express bus. I got off in Alameda and found myself on a farm after following some people off the bus into a field. I then asked a woman, “¿Dónde esta la  ‘el autobús?” but she just shook her head. I then asked a white woman in English and she pointed out the bus stop. Upon waking, I checked the gender of the word and discovered that it’s ‘el autobús,” so I made a grammatical error in a dream in a language which I’ve never (seriously) studied.

I woke up from a dream this morning in which I sang “Vivi, tiranno” from Handel’s “Rodelinda” in the original #Italian (the complete ‘A’ section but no ‘B’ or da capo ‘A’). I was singing to a group of about 15-20 people in a room in either an office building or at a university.