On the morning of October 7, WBAI staff and volunteers found themselves locked out of the stations Brooklyn offices and a notice posted from the Pacifica Foundation announcing that the station’s operations had been ‘discontinued’ due to ‘financial losses’ (Meaghan McGoldrick, “Iconic Brooklyn broadcaster WBAI shutters local programming,” Brooklyn Eagle, 7 October 2019).  The demise of the once influential FM radio station was both predictable and avoidable: predictable because WBAI had been seriously mismanaged for decades and had been in steep decline for years and yet avoidable because better board and staff leadership could have kept the station from going under; I should know — I was on the local station board (LSB) for three years and saw first-hand the mismanagement, in-fighting and outright dishonesty that led to the station’s collapse; there are lessons that could be learnt from it but probably won’t be because the parties involved in bringing about WBAI’s demise no doubt will now go onto fight over its corpse rather than consider the real causes of it.

The long string of disastrous decisions that brought about the station’s demise could fill a book and perhaps someone might one day write a full-length account of it and WBAI’s storied history and long decline, but I am not the one to do that; however, in trying to reach for a metaphor, I can only think of the rise and fall of the Ottoman empire, which under Suleiman the Magnificent was perhaps the most vital power in the world before the long decline set in that made it ‘the Sick Man of Europe.’ WBAI, sadly, was the sick station of New York City, the largest, most influential and most expensive media market in the United States.

My direct involvement with WBAI began in May  2015 when I was first approached by Bob Lederer about running for the local station board on the Justice & Unity slate, which was challenging the Indy Caucus/ACE slate in the 2015 LSB election; I agreed to run and was elected, beginning my board membership in January 2016 and serving on the LSB through the end of 2018. In my three years on the LSB, I sat through some of the most excruciatingly pointless board meetings of my life as the two factions went after each other in an attempt to score points and gain a dominant position; Justice & Unity was in the minority throughout my tenure on the board with the exception of calendar year 2017, during which there was effectively a tie, prompting the Indy Caucus/ACE faction to boycott the LSB meetings for most of the year in order to deprive the board of a quorum and frustrate J&U’s attempts to save the station from financial collapse. While the two competing factions both attempted to create the impression that there were ideological and philosophical differences between them, in truth, there weren’t any discernible differences between the politics of the two factions even if J&U was somewhat more diverse, with more people of color as well as the only openly transgendered member of the board. The real difference between the two is that the J&U people were genuinely committed to the station’s welfare while the Indy Caucus/ACE members were only using their board positions to make themselves look important; the Indy/Caucus ACE faction successfully frustrated every attempt to reform the station rather like Louis XVI who dismissed all three of his great ministers of state at the behest of his brothers and wife who were determined to preserve the Ancien Régime’s absolute power in the face of looming disaster.

The effective deadlock on the LSB was certainly a huge part of the demise of the of the station, but the mismanagement by Berthold Reimers as general manager also contributed enormously to WBAI’s untimely end; it became clear to me as well as other board members that Berthold was not merely incompetent but was also withholding important information from the LSB and was employing people such as Tony Bates who may have actually been committing fraud. Just to mention one aspect of the massive mismanagement under Reimers, as of today’s shuttering of the station’s offices, he and the staff were a full year behind in mailing out premiums to station members who pledged donations — despite a binding legal requirement to send out premiums promptly.

Not unrelated to the premium problem was the fact that the station was having to devote more and more on-air time to fundraising to try to reduce WBAI’s debt, which was recently said to be over $8 million — a debt load unsustainable even for a radio station with a much larger listening audience and a much firmer fiscal foundation than WBAI; the increasing fundraising became a vicious cycle as more fundraising further reduced the listening audience as listeners tired of the constant on-air fundraising simply switched stations or turned the radio off altogether. While other stations such as WNYC — the National Public Radio (NPR) affiliate in the city — were using social media to promote their programming and regularly podcasting programming, Reimers and the WBAI staff did not even attempt to set up podcasting and had minimal presence on Facebook, Twitter and other social media platforms.  And despite the general manager’s stated attempts to raise the quality of programming, his frequent, abrupt and arbitrary changes to the ‘grid’ — the schedule of on-air programming — only infuriated long-time hosts and producers while doing nothing to come to grips with the ongoing problem of ‘turf.’

Some of the programming was very good indeed; for example, Bob Lederer’s public health program, the OutFM LGBT program run by a collective — in the last few years, led by Bob’s partner John Riley and Naomi Brussel — a program I was interviewed on several times; Asian Pacific Forum was also a very good program back in the day. The Marilyn Kleinberg Neimark and the late Melanie Kaye/Kantrowitz jointly hosted “Beyond the Pale,” a progressive Jewish program that was one of the best on WBAI in its day. But a lot of the programs on WBAI were controlled by entrenched hosts and producers who viewed their program hours as personal on-air fiefdoms and used the air time they controlled to spout uninformed opinions and basically just ‘rant,’ with no supervision or quality control from the general manager.

Even the most popular of all the station’s hosts was a problem in himself: Gary Null frequently used his airtime to promote his debunked theory of non-HIV causes of AIDS — which outraged longstanding AIDS activists, including members of the New York City ACT UP group — as well as to hawk merchandise that frankly had nothing to do with WBAI’s mission and did little to help the station’s increasingly grave financial situation. The unwillingness or inability of the Indy Caucus/ACE board majority to hold Berthold Reimers accountable and exercise desperately needed oversight was a significant contributor to the station’s failure.

WBAI’s large listening audience had been in a steady decline for over 20 years by the time I joined the LSB and one figure I heard quoted was that the station had an audience of something less than one-thousandth of one percent of the total radio audience in the metropolitan area; in the face of a declining listenership, it was extravagant and frankly astonishing that the station would move into a luxurious suite of offices on Wall Street several years ago — the optics alone of a move to Wall Street for what was once a feisty leftist voice on the radio airwaves should have been cause for reconsideration by the LSB. The extraordinarily high rental payments to the Empire State Building for use of its powerful antenna also contributed to WBAI’s intensifying fiscal crisis; the station did eventually switch to a less expensive antenna but unfortunately, the weaker signal also meant cutting off part of WBAI’s audience in more remote parts of the station’s tri-state listening area; and WBAI did eventually move to more modest offices in Brooklyn, but not before deepening the station’s debt from the years on Wall Street.

One proposal that might have helped save the station was that advanced by John Riley (Bob Lederer’s partner), a Justice & Unity member and a longtime host and producer as well as a member of the LSB, who tried to persuade the board to look into a partnership with the Manhattan Neighborhood Network (MNN); but the adamant opposition of the Indy Caucus/ACE faction on the board blocked forward movement on that promising if complicated proposal.

The proximate cause of the shuttering of WBAI story was the emergence on the Pacifica Foundation’s national board of a majority in favor of closing down WBAI’s operations with a view toward selling the station’s license, which some suggest could bring in upwards of $50 million into Pacifica’s coffers. While WBAI is the best known of Pacifica’s five stations, KPFT in Houston, KPFK in Los Angeles, KPFA in Berkeley and WPFW in Washington, D.C. all have representation on the Pacifica national board of directors and the other stations were becoming increasingly disgruntled with the situation in New York, with board and staff members of the other network stations increasingly coming to see WBAI as a liability and becoming increasingly resentful of Pacifica Foundation resources being used to keep the New York City station from going under.

On July 24, Pacifica announced the hiring of John Vernile as its interim executive director, and he made the decision to shutter WBAI and simply air programming from Berkeley for the short term, an action being described by some WBAI board and staff members as a ‘coup.’ Whether or not one finds that term an accurate description of the action, it comes at the end of a very long decline — to use another Ottoman metaphor, rather like Mehmet the Conqueror’s bombardment and capture of Constantinople in 1453, by which time the Byzantine Empire had ceased to be an empire in all but name, controlling only the immediate area around its increasingly besieged capital city; the seizure of Constantinople while a shock was only the coup de grace to the tottering Byzantine Empire just as Mustafa Kemal Atatürk’s abolition of the Ottoman caliphate on 3 March 1924 was really just the elimination of a 600-year-old institution that had dwindled into irrelevant anachronism, a mere shadow of its former self.

There are some who are calling for the re-establishment of WBAI, but there is not a snowball’s chance in hell of that happening because the sale of the station’s license is the only way to raise sufficient cash to pay off its enormous debt, accumulated over decades of mismanagement. There is a saying that success has many fathers, mothers or parents but failure is an orphan, and so it is with WBAI: none of those who are responsible for its demise are ever going to take responsibility for their contribution to the station’s collapse. Like the Byzantine and Ottoman empires, WBAI is  but a shadow of its former self; in its glory days, the station was arguably the voice of the left in the metropolitan area, but WBAI has been resting on its laurels for decades with an aging and rapidly dwindling audience, an incompetent and even dishonest staff leadership and a hopelessly factionalized local station board led by a self-interested and incompetent board majority. The demise of a once great station has been long in the making and like Humpty Dumpty, all the station’s horses and all the station’s men (and women) will not be able to put it back together again. 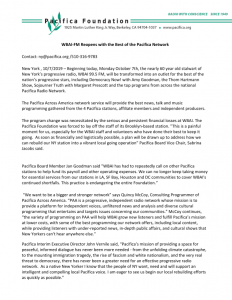 Pauline Park, Ph.D. is a human rights activist based in Queens; she is the chair of the New York Association for Gender Rights Advocacy (NYAGRA) and president of the board of directors of Queens Pride House and was elected to serve on the WBAI local station board from 2016-2018; the views expressed here are her own and not those of WBAI, its local station board, its staff, the Justice & Unity group or any organization with which she is associated.