The Metropolitan Opera’s 2009-10 season is anything if not eclectic, representing a judicious mix of old warhorses and operatic rarities. The new season will feature eight new productions – four of which are being billed as “company premieres” – and 18 revivals.

Among the “tried and true” are new productions of two of the most popular operas in the repertoire: Bizet’s Carmen and Puccini’s Tosca. From the French repertoire, the Met will be offering new productions of Jacques Offenbach’s Les Contes d’Hoffmann (The Tales of Hoffmann) and Ambroise Thomas’s Hamlet, the latter based (somewhat loosely) on the Shakespeare play of that name.

But perhaps most interesting to veteran operagoers will be the four new productions of operas never before heard at the Met: Rossini’s Armida, Verdi’s Attila, Janáček’s From the House of the Dead, and Shostakovich’s The Nose – all of which deserve the appellation “rarity.”

One has the impression that Armida is being staged to showcase the Met’s reigning diva of the day, Renée Fleming; certainly, even among ardent Rossinians, there will be few who have seen this opera anywhere since its premiere in Naples in 1817. As for the rationale for staging Attila– one of the most obscure and rarely staged of any of the early Verdi operas – there has been little demand as far as I am aware – whether here in New York or elsewhere – for operatic depictions of the ruthless leader of the nomadic Huns. One could certainly imagine that the entertainment value of hearing Attila the Hun singing in Italian in 4/4 time could wear thin over a long evening in the theater.

But having commissioned Tan Dun to produce the bloated and pretentious bomb of an opera about the first emperor of China (imaginatively entitled The First Emperor) for the 2006-2007 season, the Met may wish to follow up by commissioning an opera about the life of Genghis Khan, Timur, or some other well-known bloodthirsty conqueror of yore.

Perhaps even more adventurous in subject matter than Attila is Shostakovich’s opera about a man “who wakes up to discover that his nose has disappeared.” But the most intriguing of all the new productions is that From the House of the Dead, which Janáček set in a Siberian prison camp. First staged in the Czech city of Brno in 1930, From the House of the Dead was Janáček’s last opera and considered by some to be his most extraordinary. Directed by Patrice Chéreau – best-known for his controversial 1976 Bayreuth production of Wagner’s Ring cycle – and co-produced with three European companies, this new production of Janáček’s final work for the stage was voted Europe’s best opera staging for 2007. 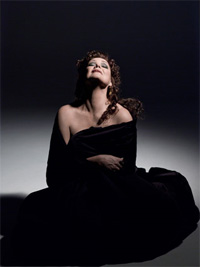 The new Met season commences with an opening night gala on September 21 with Karita Mattila singing the title role in Puccini’sTosca for the first time at the Met. Tosca is not a role one immediately associates with the Finnish soprano, but she is an exceptionally versatile singer and one of the best dramatic sopranos in opera today. The other special event of the season is the New Year’s Eve gala performance of Bizet’s Carmen, with Angela Gheorghiu – a Romanian soprano with a distinctly mixed track record – in the title role.

The new season is being described by the Met as “the first to be entirely planned under Peter Gelb’s leadership,” reflecting the still new-ish general manager’s attempt to put his own innovative stamp on a company with something of a reputation for staging stodgy productions of old warhorses studded with temperamental big-name stars. Certainly, one can have no doubt that long-time music director James Levine still exerts great influence over the choice of singers as well as productions; but with this new season, the Met is becoming Peter Gelb’s Met as much as it was at one time Sir Rudolph Bing’s Met.

Gelb’s audacious efforts to increase the audience for opera through the screening of filmed stage productions in movie theaters around the country and around the world is a calculated gamble that whatever revenue may be lost to the house will be more than offset by bringing new subscribers and especially younger people into the fold of an aging and predominantly white and middle-class opera-going public. It may not be too much of an exaggeration to say that the future of opera as a living art form may hinge at least in part on the success or failure of such efforts to expand the base for opera in general as well as for the Metropolitan Opera in particular.

For more information about the 2009-2010 season, go to:
http://www.metoperafamily.org