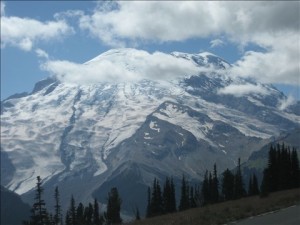 When I first heard about “The National Parks: America’s Best Idea” — the new documentary by Ken Burns that is airing this week on PBS — I must admit I was skeptical, wondering if Burns could do for our national parks what he did for the Civil War.

Oh, me of little faith~! Burns has done it again. The master of the slow-moving documentary has managed to make what could have been a bore into a compelling story, beautifully told. There is drama here not only in the extraordinary beauty of the landscape but in the story of the establishment and development of the park system.

Up until August of 2009, I had never set foot in a national park. I use the phrase ‘set foot’ quite deliberately, because the Burns documentary did make me remember that I had in fact passed through a national park in my youth, when my mother and brother took the train from Milwaukee to Seattle and then onto Vancouver, passing briefly through Glacier National Park in Montana.

On August 16 of this year, I made my first real visit to a national park, when I went to Mount Rainier National Park. I had just finished attending the first national conference of the first national organization for queer APIs — the National Queer Asian Pacific Islander Alliance (NQAPIA) — in Seattle.

While at the NQAPIA conference, I discovered that two very new friends whom I’d met there were planning on driving up to Mount Rainier, and they were happy to have the company, and so we set out from Seattle to drive down to ‘the mountain,’ as Seattleites call it.

When the sky is clear and Seattleites can see Mount Rainier, they say, “The mountain is out.” And the mountain is an impressive sight even from the city, a hundred miles away. But from Sunrise Point within the park, the sight of Mount Rainier — rising majestically 14,410 feet above sea level — is truly breathtaking.

The three of us visited Mount Rainier National Park one hundred years after its establishment in 1899. “In the national parks, all are just Americans,” Robert Sterling Yard is quoted in the Ken Burns documentary as saying. And indeed, here three queer APIs from big cities thousands of miles away could experience the wonder of nature just like everyone else.

“Designed by God to be protected forever” is what Horace Albright — who Stephen Mather founded the National Park Service — said of the Grand Tetons; how equally apt is that dictum when applied to Mount Rainier~! How fortunate we are indeed that the ‘episodically active’ volcano and the entire 235,625 acres (368 square miles) of the park has been preserved for future generations. 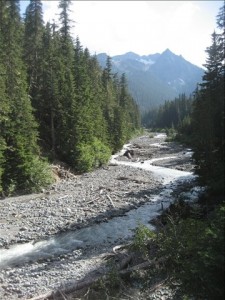 But the high point — figuratively, if not literally — of the trip for me was the drive through Frying Pan Creek, where we got out to stand on the little bridge that crosses the little sliver of a creek. The extraordinary beauty of that creek and the little valley surrounding it reminded me of my trip to Romania in 2005. Living in the largest city in the United States, so far from nature, I found this trip to be exactly what I was hoping it would be — salve for the soul. So go visit a national park when you get the chance — and consider how vitally important it is that our national parks be preserved from rapacious commercial interests forever.