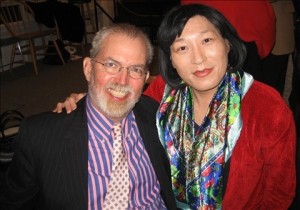 Forrest Church and Pauline Park at All Souls in December 2008

On 24 September 2009, Forrest Church departed from his earthly life, at the age of 61, after a three-year struggle with esophageal cancer.

Forrest was the senior minister of All Souls Unitarian Church on the Upper East Side of Manhattan, and he was one of the reasons I joined the church in 2006, after having been ‘unchurched’ since 1978. I am referring to him here as ‘Forrest’ because that is simply what everyone at All Souls called him, as if he were one’s next-door neighbor, even though he was one of the most prominent ministers in the Unitarian Universalist Association as well as being recognized as one of the most distinguished liberal theologians in the United States.

And the key moment in my decision to join All Souls in September 24 of that year, after hearing Forrest’s sermon that morning on “The Third Great Awakening?” What struck me as most remarkable about this sermon was that Forrest concluded with a repudiation of the misuse of religion and religious faith by the administration of George W. Bush that was as eloquent as it was historically informed . Instead of trying to score partisan or ideological points — which would be all too easy, given the administration’s shameful record on foreign policy and domestic politics — Forrest instead situated the Bush presidency’s abuse of religious faith for political purposes firmly within the context of an erudite analysis of the history of religion in the United States.

The son of U.S. Senator Frank Church of Idaho, who chaired the Senate hearings into the abuses of the FBI and the CIA, Forrest Church was every bit as remarkable as his distinguished and remarkable father. As the obituary on the All Souls website notes, he was the author of 25 books, the last — The Cathedral of the World — written in the last few months of his life. One of the most quoted of contemporary liberal theologians, Forrest’s motto in life was, “Want what you have, do what you can, be who you are.” Of the supreme being, Forrest declared, “God is not God’s name. God is our name for that which is greater than all and yet present in each.”

Forrest was as beloved by family, friends, colleagues and congregants as any pastor of any American church. But unlike so many religious figures today, he was utterly without pretension. Forrest barely knew who I was, as I was a relatively new member of All Souls, and his appearances at church grew more and more infrequent as his cancer progressed, but he always greeted me with genuine warmth and friendly cheer.

Last December 21, I heard Forrest preach at All Souls, articulating the broad themes of his penultimate book, Love & Death: My Journey Through the Valley of the Shadow. Afterwards, I saw him in the fellowship hall downstairs, and he kindly agreed to autograph the copy of his book that I had just bought. He looked quite good at the time, considering that he had a terminal case of esophageal cancer, but I had the very strong intuition that it might be one of the last times that I would see him, and so I asked him if he would sit for a photo with me. Forrest very graciously agreed to post for a photo with me, though there were literally hundreds of congregation members who were eager to speak with him. Sadly, that Sunday in December was in fact the last time I would see him, and I am delighted that I have even that single photo with him to remember him by.

Forrest knew he was dying, and he faced the prospect of death with courage and serenity. In that sense, his death and especially his dying were as exemplary as his life. He said of life that “The goal of life is to live in such a way that our lives will prove worth dying for.” All those who knew Forrest know what an enormous loss his death represents, but only those who knew him could possibly know what an enormous gift his life was for all of those he leaves behind.

2 thoughts on “Love, Death and the Final Journey of Forrest Church”