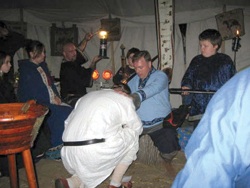 Dan Halloran performing a pagan ritual; but are the other heathens registered Republican…?

William James wrote of “The Varieties of Religious Experience” in 1902, long before the movement now known as ‘neo-paganism’ came into its own. While I am not aware of any survey data on the matter, I suspect that most people, if asked, would probably imagine such modern pagans to be on the left of the political spectrum. So it may come as a surprise to the voters in the 19th New York City Council district — one of the two most conservative in Queens, which includes Bayside, Whitestone, Auburndale, Flushing North and other neighborhoods on the northeastern fringe of the borough — to discover that the Republican nominee for City Council in their district identifies as a pagan.

When the Queens Tribune discovered that the candidate who now has the Republican, Conservative, Independence and Libertarian Party lines going into the November general election also styles himself ‘First Atheling’ of a local group of self-identified ‘heathens’ dedicated to the worship of the old Norse gods, the weekly newspaper dubbed Dan Halloran the ‘pagan king.’

Halloran’s campaign website gives one the impression of a boilerplate tax-cutting Republican. There’s certainly nothing to indicate that the Irish American who was raised Catholic is a pagan, much less the lawyer for the New York City Pagan Pride Project. From his responses to questions from the Queens Tribune, the conservative Republican seems slightly embarrassed to have gotten media attention for his paganism, and there’s no link on his campaign website to his profile page on paganspace.net, where he calls himself ‘Dan-O’ (‘O’Halloran’ apparently being the traditional Irish version of his family name). Halloran is certainly the first Republican candidate for public office I’ve ever come across who lists ‘heathenry’ as one of his hobbies or who claims to be the ‘first atheling‘ (leading prince) of a local band of Norse pagans.

Halloran’s belief system — ‘Theodism‘ — is defined by The Witches’ Voice as “a heathen orthodox approach to Germanic reconstruction.” I suppose if one is going to run as a heathen Republican, it is probably best not to stray too far from heathen orthodoxy; if one does, one risks the wrath of people with names like ‘Swain Wodening’ and ‘Gert Thygen McQueen.’ But Halloran’s more recent concern has been less the anger of the Thaet Angelseaxice Ealdriht than the displeasure of the barons and thanes of the Queens County Republican Party  organization. After rumors that Halloran might get the axe — wielded no doubt by the decidedly post-Norse, conventionally religious party boss Phil Ragusa — Halloran’s spokesperson insisted that the candidate would not be offered a judgeship or pushed aside in favor of Paul Vallone (scion of former Council Speaker Peter Vallone, Sr.), who had just lost the Democratic primary in the 19th to Kevin Kim. So apparently the “GOP is standing by their Theodsman,” as one neo-pagan blogger put it.

“What we [the Queens County Republican Party] have done is stand firmly with Dan Halloran and called on Congressman [Gary] Ackerman and his staffer Kevin Kim to renounce the vile, repugnant attacks on Dan Halloran’s faith and heritage,” Vince Tabone (Queens executive vice-chairman and spokesperson for the Halloran campaign) was quoted as saying. Tabone’s tone of moral indignation might have more credibility if there were any indication on Halloran’s website or in his campaign literature of a commitment to diversity of religious and spiritual expression or any history of the Queens County Republican Party’s commitment to such diversity. Certainly, the national Republican Party has been the instrument of the religious right from 1980 to the present day and its intolerance for any form of religion except Christian fundamentalism of the most bigoted sort has had a profoundly negative impact on this country for more than a generation.

While Dan Halloran would be the first pagan-identified candidate that I am aware of to win elected office in this city or anywhere in the state, the fact is that he was not running as an ‘out and proud’ pagan. Halloran was ‘outed’ by the Tribune and has seemed sheepish in trying to defend himself, saying simply that his religious faith should be kept out of the race — not at all the response one would expect from someone who cites Beowulf as one of his heroes. Perhaps Halloran could more effectively rally the neo-pagan vote in the 19th district if he were more stout in his defense of his Theodic faith. But the 19th is not, as far as I am aware, a hotbed of heathenry; in fact, it is one of the most socially and politically conservative Council districts in New York City and one of the few in which Republican candidates are viable, so Halloran does have a good chance of winning the seat being vacated by Council Member Tony Avella, who on Sept. 15 lost the Democratic primary for mayor to Bill Thompson.

Whichever candidate wins, he will be making history. The high heathen Halloran will face Kevin Kim in the general election in November, as Kim won the hotly contested Democratic primary on  Sept. 15. The deputy director for community affairs for U.S. Rep. Gary Ackerman (D-5), Kim has his boss’s support, and if he prevails in November, he would be the first Korean American elected to public office in the borough or the city.  Kim’s candidacy takes on added significance, given the failure of Korean American John Choe — the former chief of staff to outgoing Council Member John Liu — to win the Democratic primary for the seat being vacated by his boss (now the all-but-certain City Comptroller) in the 20th district, centered on Flushing. Choe was the victim of a particularly vicious red-baiting campaign that attempted –without any evidence — to tie him to the totalitarian regime that rules North Korea, simply by virtue of his membership in Nodutdol, a progressive New York-based organization working for the peaceful reunification of the Korean peninsula. Kevin Kim is now the only candidate for City Council of Korean descent, and on November 3, the voters of the 19th district will determine whether a Korean American takes office for the first time in the history of the city or the state.

I live in the 25th Council district in western Queens, which seems a world away from the 19th in ambience and political culture; but if I were a voter in the 19th district, I would certainly vote for Kevin Kim, whose politics are clearly more progressive than Halloran’s warmed-over right-wing Bush Republicanism. Kim is my atheling of choice.

Beowulf? or Thane of Cawdor…?