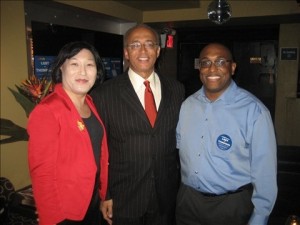 There are two reasons to vote for Bill Thompson for mayor of New York in November 2009: first, because he’s been a good comptroller of the City of New York; second, because he’s not Mike Bloomberg.

“Bloomberg’s legacy has been most tarnished by the blatantly undemocratic maneuver he pulled on term limits,” declared El Diario/La Prensa in endorsing Thompson for mayor. “Twice, New Yorkers had voted to limit the service of local elected officials to two terms. Instead of respecting that, Bloomberg and his associates peddled the idea of overturning term limits to the editorial boards of local newspapers; pressured the heads of nonprofit organizations that rely on private donors and city funding to speak before the City Council in support of undoing term limits; and contrived to run out the clock on a referendum.“All of this is not simply slick scheming—it is a gross abuse of power. Even Venezuela’s President Hugo Chávez conducted a plebiscite on his extended stay in power. New Yorkers were not even given that chance.“With city government already tipped to favor the executive branch, Bloomberg’s power grab delivers a clear message: the ability of constituents to challenge power and shape decisions at the top is seriously in danger. The prospect of a mayor with an emperor-esque approach to New Yorkers bodes poorly for our city.“Bloomberg had his eight years. It is now time for the city to move forward with new leadership. On November 3, we strongly urge New Yorkers to cast their ballots for Bill Thompson.”