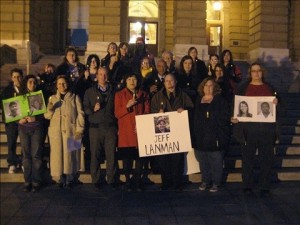 Today, we come together here on the steps of the Iowa State Capitol in Des Moines to commemorate the very first Transgender Day of Remembrance in the history of the state of Iowa. And so I would like to thank all of those who came out tonight to take part in this historic occasion.

I would especially like to thank the two people who made this event possible: Sandy Vopalka, the executive director of Equality Iowa; and Jayden McCurnin, the  co-coordinator of Transformations Iowa, which meets at The Center here in Des Moines. Their leadership here in Iowa is an inspiration to people across the state as well as to me and to their colleagues in the Equality Federation — formerly, the Federation of Statewide LGBT Advocacy Organizations — of which Equality Iowa and NYAGRA (the New York Association for Gender Rights Advocacy) are member organizations.

I would also like to thank Gwen Smith, a transgender activist in San Francisco who originated the Transgender Day of Remembrance to mark the death of Rita Hester, a transgendered woman murdered in Boston on the 28th of November 1998. Gwen and a number of other transgender activists organized the very first TDOR on the 20th of February 1999, marching down Castro Street in San Francisco to demand an end to hate crimes against transgendered people.  Now, nearly eleven years later, the Transgender Day of Remembrance is observed in hundreds of cities and towns around the country  — from Albany to Atlanta, from Albuquerque to Anchorage, from Chicago to Seattle, from Boston to Billings, from Bloomington to Baton Rouge. And so when you stand here on the steps of the state capitol in Des Moines, you join a national movement calling for the end to hate crimes against people based on their gender identity or expression.

And TDORs are being held this week in Canada, from Halifax to Toronto to Vancouver.  In fact, this is a movement that has now gone global, with candlelight vigils and commemorations marking the Transgender Day of Remembrance around the world, from Milwaukee to Milan, and from Providence to Perugia; from Princeton to Perth; from Kalamazoo to Calgary, and from Coventry to Kuala Lumpur; from San Antonio to Sydney to Saskatoon, from Burlington to Brussels to Berlin, from Tacoma to Tulsa to Tel Aviv.

And so when you stand here on the steps of the state capitol in Des Moines, you participate in an international movement calling for the end to hate crimes against transgendered and gender-variant people. I come to you from New York, which unlike Iowa, has yet to enact a state discrimination law protecting people from discrimination based on gender identity or expression. On that score, the Hawkeye State is ahead of the Empire State. Iowa is also ahead of New York in enshrining marriage equality in state law, and I want to especially acknowledge the leadership of One Iowa and Equality Iowa in making that great victory possible.

But on this solemn occasion, our thoughts naturally turn to the daily struggle for survival that many transgendered people face across the country and around the world. I live in the Borough of Queens, and there have been three violent attacks on members of our community in the County of Queens just this year. First, there was the attack on Leslie Mora, a transgendered Latina woman assaulted as she was coming out of a gay bar in Jackson Heights only about 8 blocks from my apartment building. Then there was Carmella Etienne, a transgendered Afro-Caribbean woman who was born in Haiti, who was assaulted in St. Albans, the neighborhood in southeastern Queens where she lives. And then there was Jack Price, a gay white man who was attacked coming out of the corner store just a few blocks from his apartment; the beating he endured at the hands of two young men was so severe that there was initially some doubt as to whether he would survive. I’m happy to say that Leslie and Carmella are fully recovered and Jack is now on his way to a complete recovery. But all three continue to suffer the psychological wounds that come with such hate crimes.

Sadly enough, Lateisha Green did not survive her attack in upstate New York in November 1998. On November 14, just over a year ago, Lateisha, a transgendered African American woman, was with her gay brother and a transgendered friend of hers at a party in Syracuse, the city she was born and raised in. Leaving the party, the three were pulling out of the driveway when another partygoer came out of the house where the party was held, wielding a shotgun. Dwight DeLee wounded Lateisha’s brother, Mark, who is now thankfully recovered from his injuries. DeLee also shot Lateisha, who died only a few hours later in the hospital; she was only 22.

In August, Dwight DeLee was convicted and sentenced to 25 years in prison. But the conviction was for manslaughter, not murder. The only reason that Lateisha Green’s murderer was sentenced to 25 years for her murder was because the district attorney chose to prosecute the crime as a hate crime. But the New York state legislature actually passed the state’s hate crimes bill without gender identity or expression, because the New York State Hate Crimes Bill Coalition refused to support NYAGRA’s call for inclusion of gender identity and expression in the bill before its passage. The simple fact was that the leaders of the coalition — two gay white men — refused to support transgender inclusion in that legislation. And so in the very first prosecution of a transgender hate crime under New York state law, Dwight DeLee was prosecuted under the rubric of ‘actual or perceived sexual orientation.’

But if law is an important and necessary tool of social change, it is a weak tool. Ultimately, it is a battle for the hearts and minds of our fellow human beings that we must wage – in conversations with family members, friends, colleagues, and neighbors, and fellow human beings as well as through events such as this one.

I’m happy to report that there are events being held this week to commemorate the Transgender Day of Remembrance over our northern border in Canada, from Halifax to Toronto to Vancouver.  In fact, this is an event that has now gone global, with candlelight vigils and commemorations marking the Transgender Day of Remembrance around the world, from Milwaukee to Milan, and from Providence to Perugia; from Princeton to Perth; from Kalamazoo to Calgary, and from Coventry to Kuala Lumpur; from Burlington to Brussels to Berlin, from San Antonio to Sydney to Saskatoon, from Tacoma to Tulsa to Tel Aviv.

Let us come together, then, as a global community of human beings committed to the protection of those most vulnerable to violence. Let us work toward that day when no one will have to fear discrimination, harassment, abuse or violence because of their gender identity or expression or for any other reason. Let us renew our commitment here and now to the paramount principle of non-violence and a national and a global order of justice for all.  Thank you.