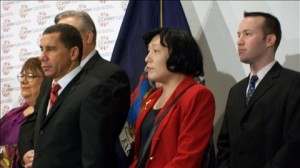 On Dec. 16, Gov. David Paterson signed an executive order (Executive Order No. 33) prohibiting discrimination based on gender identity or expression in state employment.

As the chair of the New York Association for Gender Rights Advocacy (NYAGRA), I was invited to join the governor on the dais along with a number of other activists as well as elected officials. And I was invited to make a statement on behalf of NYAGRA that was included in the press release issued by the governor’s office announcing the executive order. The New York Times broke the story of the executive order the day before the signing ceremony. Several media outlets covered the event. Gay journalist and blogger Michael K. Lavers filed a report about the executive order for Edge Boston as well as on his own Boy in Bushwick site. 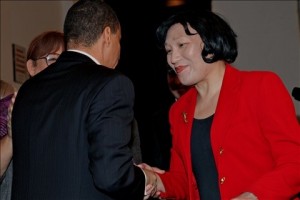 Here is the text of the press release from the governor’s office quoting me:

Pauline Park, Chair of the New York Association for Gender Rights Advocacy (NYAGRA), said: “Governor Paterson has taken an important step in helping members of the transgender community secure full legal equality under state law in New York, and we applaud him for this historic executive action. In extending protections from discrimination based on gender identity or expression in State employment, the Governor creates momentum for enactment of the Gender Expression Non-Discrimination Act (GENDA). We in NYAGRA call on the State Senate to follow the Governor’s lead and take action on GENDA now.

(NYAGRA is a co-founding member of the GENDA Coalition, which is coordinated by Ejay Carter, the transgender rights program organizer at the Empire State Pride Agenda.) 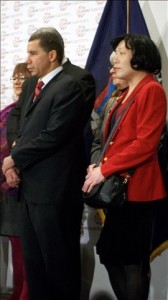 The governor with Pauline Park at the signing ceremony.
(photo courtesy of Michael K. Lavers)

Gov. Paterson should be commended for taking this important step.  It’s now up to the New York State Senate to pass GENDA so that all transgendered and gender-variant New Yorkers are protected from discrimination under state law.