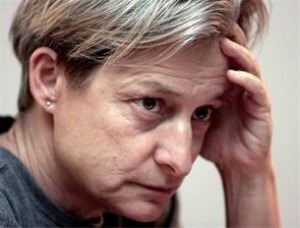 Judith Butler has an uncanny knack for self-aggrandizement, and casting herself as the voice of LGBT people of color in Germany is only the latest and most outrageous acts of ruthless self-promotion.

Berlin’s biggest LGBT pride event is Christopher Street Day, and Butler was invited to speak at the event on June 19 as a recipient of the ‘Zivilcouragepreis’ (which could be loosely translated as ‘prize for courage in pursuing civil rights’). Rather than give the expected acceptance speech, Butler chose to use her speech to denounce the event organizers for racism:

“When I consider what it means today, to accept such an award, then I believe, that I would actually lose my courage, if i would simply accept the price under the present political conditions… For instance: Some of the organizers explicitly made racist statements or did not dissociate themselves from them. The host organizations refuse to understand antiracist politics as an essential part of their work. Having said this, I must distance myself from this complicity with racism, including anti-Muslim racism…”

(The full text of Butler’s speech in English translation was posted to the website of the European Graduate School).

Butler then proceeds to mention Gays and Lesbians from Turkey (GLADT) and Lesbian Migrants and Black Lesbians (LesMigraS) as organizations of color and SUSPECT and ReachOut as anti-racist organizations and congratulate them for their work.

Now, I would ordinarily be inclined to commend and support those who speak out against statements and actions that are anti-immigrant and anti-Muslim, and if CSD organizers had made such statements, they needed to be held accountable for them. But what struck me as I listened to the speech in the original German and read it in English translation was how false it was. Butler is not herself either Muslim or a person of color, nor is she German, nor is she an activist (at least in any sense that would be recognized outside of departments of rhetoric at elite universities in the United States). Butler has never co-founded an organization for doing anti-racism work, whether LGBT or otherwise; nor does she do any activism (on behalf of queer people of color or otherwise) in Germany.

Rather, Butler is a privileged white American academic theorist who used her position of privilege and power to appropriate the position of the person of color, and that is a kind of racial politics that strikes me as false. Not only is it completely graceless to refuse an award from an organization in a speech given at an event organized by that organization, there is not an iota of recognition on Butler’s part of how she got to where she is in part because of her white-skin privilege. Nor  is there any recognition of the enormous institutional privilege and power she wields as the hegemonic figure in the field of gender studies. Had Butler not been widely reputed to be the leading gender theorist in the world, it is far less likely that she would have been considered for the CSD Zivilcouragepreis.

Butler did her Ph.D. in philosophy at Yale University, which must surely be accounted second only to Harvard as the wealthiest, most powerful and most elite of all of American universities. And she has done very well in her academic career, parlaying her elite Ivy League doctorate into a tenure track position at the University of California at Berkeley, where she is now Maxine Elliot Professor in the Departments of Rhetoric and Comparative Literature and the Co-director of the Program of Critical Theory. As a tenured full professor, Butler is at the top of the heap on the faculty of what is widely reputed to be the leading public university in the United States, if not the world. And for those who are not familiar with the highways and byways of academia, an endowed chair such as that which Butler holds is the ultimate status symbol among status-conscious (if not status-obsessed) academics.

Nor is there any recognition in Butler’s CDS speech of the privileges that her wealth and upper middle class status confer. At an annual salary of $200,000, with total compensation at $232,583, Butler is more than comfortably upper middle class — she is actually in the top 0.001% of income globally, and according to the calculations of the Global Rich List website, the 107, 565 richest person in the world. Nor is there any recognition of how her US citizenship enables her to speak from a position of privilege and even hegemony at an event outside the United States.  The Ugly American is ugly not because s/he is American per se, but because s/he appropriates a position of global sovereignty wherever s/he goes, unaware of the structures of power that enable him/her to do so.

What is so striking to me in all of the media coverage of the speech is that no one has stopped to consider what Butler could have done differently. For example, rather than give the speech herself, Butler could have brought someone from one of the four groups that she mentioned in her speech onto stage at Christopher Street Day to make a statement in place of the speech she gave. Or, Butler could have insisted that the CSD organizers invite one or more individuals from one or more of those four organizations receive the award and be given the opportunity to speak to the CSD crowd. Or, Butler could have issued a public statement declining the award for the reasons that she articulated in the speech she gave on June 19, presumably saving the organizers the expense of flying her to Berlin (notably absent from the media coverage over the event is any reference to what Butler received in the way of a speaking fee for giving the speech or whether the CDS organizers paid for her travel and accommodations).

Instead, Butler chose to insist on her own supremacy as the arbiter of race relations in Germany as well as the United States, despite the fact that she herself is neither a person of color nor an activist who has done anti-racism work in either country. Someone in the field of language and rhetoric such as Butler will be aware of the difference between text and subtext as well as theory and praxis — not to mention positionality – and so she cannot be unaware of how the speech act represented by her June 19 speech could have precisely the opposite effect that it was ostensibly intended to have. Upon closer examination, Butler’s speech will appear to the discerning eye to be not so much an articulation of anti-racist discourse but rather a displacement of a genuinely anti-racist praxis — an easy but faux anti-racism of the sort that an armchair activist will engage in with no risk and little effort.

Mark John Isola, an assistant professor of English at Wentworth Institute of Technology in Boston, has written of the controversy,

“As much as Butler’s actions point something out, I am uncertain that Butler is not reproducing what she portends to distance herself from as she essentializes racism–and others follow suit re: the gay white male community.  Should we not perhaps consider the idea that gay white men are not interchangeable nor function with a one-think across chronological, cultural, class, and geographic positions?  As a gay white male, I find this idea tedious, if not hinky and dangerous, and I wonder if Butler is not privileging one group over another for the sake of a point, which leads me to consider her stance an act of grandstanding rather than an earnest effort to make a point.  Or, perhaps, it is simply an act of discursive delimitation re: modish theories of the other and difference.

“What about the homophobic complicity, as such can occur within the racialized other?  Such homophobia can oft be seen to have a transnational and transpositional but not (I will not accept such) a transcendental rate of incidence.  It seems, if one will speak of complicity with the forces of othering, then this other fact, as annoying as it is for our conventional theoretical paradigms, must be addressed. Perhaps, we ought look to a new framework rather than resting upon old arguments and assumptions, as such are increasingly failing to be productive in a rigorous analysis. I am just not seeing productivity in Butler’s position, as much as I feel this is a rhetoric I have read repeatedly before. It is also one that I am finding increasingly uncomfortable to accept, especially as it emanates from such a power broker in the world of thought, and there are class positions and deep issues of academic location to be considered here, for titles, tithes, and tenure are not beyond discursive delimitation.

“In sum, if Butler will get us thinking about sexuality and its problematic relationship to race, she must also consider the inverse, for the sake of critical interrogation and not a mere metanarrative framing of an issue.  I fear, such hasty theorizing is increasingly making the Academy irrelevant in the 21st century, and I wonder if anyone could suggest readings that are also analyzing the increasingly irrelevant and distancing nature of the Academy.  I am exploring this rift in a chapter I am working, and I am very curious to explore Butler’s position here, as I find it a bit precious, if not problematically revealing of a new power structure that we might want to begin unscrewing just a bit…”

As Isola argues, the tone of Butler’s speech suggests that it was nothing but grandstanding of the sort that politicians engage in all the time. The speech certainly did nothing to support the work of queer people of color, whether in Europe or the United States; on the contrary, I think it subtly but very effectively undermines it by subordinating that work to the globalizing discourse of a hegemonic theoretical and institutional position (viz., Butler’s); but such an outcome may very well accord with the unspoken intention behind the hegemon’s oily utterance.