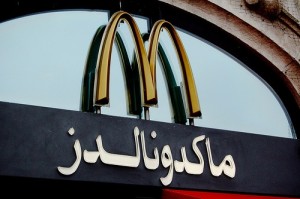 The massive protests against the World Trade Organization in Seattle in 1999 dramatized the growing resistance to globalization. What are the implications of globalization for labor and for labor organizations representing the workers of the lesbian, gay, bisexual, and transgender (LGBT) community?

The term ‘globalization’ is a catchprhase that conveniently labels a complex phenomenon. At its simplest, globalization refers to the gradual erosion of the government of the national state and its ability to control and direct capital as well as labor. Sometimes call the ‘nation-state,’ the national state emerged in Britain and in France. In the 20th century, the founding of the social democratic state under Roosevelt’s New Deal in 1933, the Popular Front government in france in 1936, and the Labour government in Britain in 1945 vastly expanded  the scope of national government activity. What Americans have called ‘liberalism’ ever since FDR, social democracy consists of four key components: the welfare state, regulation of business and industry, fiscal policy, and monetary policy.

The increasingly free flow of capital across national borders now threatens the ability of the national states to pursue autonomous fiscal, monetary, regulatory, and social welfare policies. It is now market forces — pre-eminently transnational corp[orations, institutional investors, and international currency speculators — that determine most policy outcomes. Hence globalization represents not only a threat to the social democratic revolution of the 20th century but a reversal of a thousand years of history.

The ultimate irony of it all is that the political left, which has been most closely associated with the process of state-building over the last century, has pursued the dismantling of the social democratic state with as much vigor as the right. Governments of the left have been presented with this choice: either govern from the center-right or face a reversal of policy by the forces of international capital. Regional integration through the North American Free Trade Agreement (NAFTA) or the Maastricht Treaty on European Union (EU) represents an attempt by national governments to try to recover some degree of national autonomy by ‘pooling’ sovereignty, but it ultimately only accelerates the ‘hollowing out of the state’ by devolving authority upwards to regional formations such as NATA and the EU and downwards to sub-national units (in the US, state and local government).

Unfortunately, the weak labor provisions in regional and global trade agreements are more than offset by the gains made by international capital through such treaties. Equally unfortunate is the apparent inability of the left to offer credible alternatives to unregulated free trade that escape being labeled ‘protectionism.’ Everywhere, the discourse of neoliberal free trade dogma is triumphant. The hegemony of neoliberal discourse in academic circles and policy discussions, coupled with the increasing ability of transnational corporations to evade national regulation of labor standards, has led to a decline in the power of organized labor and in its ability to improve workplace conditions in the United States or abroad. As sweatshops multiply in New York’s Chinatown and in major cities throughout North America and Europe, transnational corporations have brought the Third World to us.

The old slogan of gay activists, “we are everywhere,” applies to LGBT workers as well: we are found not only making policy in corporate headquarters anbd ‘making partner’ in ‘white shoe’ law firms, but flipping burgers in fast food restaurants and sewing garments in sweatshops. Some of us — especially transgendered people and people of color — are unable to find legal employment at all because of pervasive discrimination. It is in the marginalization of LGBT people in labor markets from the advanced industrial economies to the less developed countries that the abstractions of globalization become most painfully concrete. And it is those among us — the working poor of the global village — who are most in need of progressive alternatives to the emerging international trade regime and the dismantling of the social democratic state.

LGBT labor activists must address the reality of the contemporary international political economy, namely, that the national state is no longer in a position to guarantee the rights of labor, even when labor-supportive heads of government are elected. That is not to say that a change of national administration is meaningless. The ‘election’ of George W. Bush as president will deepen the challenge for organized labor in the United States, even if it is only a case of going from bad to worse.

But Bush is both empowered an constrained by ‘non-state actors’ — in particular, transnational capital — that elude control by any national state. No national government now commands the economy ostensibly under its control. And given the hegemony of neoliberal (i.e., conservative) discourse in policymaking circles, national governments throughout the world are pursuing policies that do more to undermine the well-being and security of workers than they do to enhance them. In such adverse circumstances, what can LGBT labor activists do?

First, activists must counter neoliberal discourse with economic analysis that is empirical, analytic, and persuasive, leaving behind the crudely deterministic model of class struggle as the cause of all oppression. Second, those activists who have a Romantic attachment to particular modes of activism should re-examine those tactics to determine how effective they are in contemporary circumstances. Third, activists must form alliances across national boundaries and across lines of race, ethnicity, language, class, sexuality, and gender.

What does this mean in practical terms? To be successful in today’s political culture, a movement must simultaneously play both an ‘insider’ and an ‘outsider’ game; and an LGBT labor movement must do so not only at the national and subnational levels, but at the international level as well. International institutions such as the United Nations or the World Trade Organization are not autonomous. In order to influence them, activists must change policies in the member states that control them; and in order to do that, activists must change the behavior of the transnational corporate interests that influence the member governments.

To be effective, therefore, LGBT labor activists must build transnational coalitions. One example of such transnational organizing is the movement to diverst the stock of companies doing business in South Africa, which helped bring about the end of the apartheid regime. Significantly, the government of Nelson Mandela elected in 1994 promulgated a constitutional amendment that includes the broadest protections based on sexual orientation contained in any national constitution.

The challenges before the LGBT labor movement are great. But we are at a unique moment in history when we as LGBT people can make a contribution to the labor movement that will help improve the lives of workers throughout the world. In order to do so, we must think globablly, and we must act locally, nationally, and internationally.

Pauline Park did her Ph.D. in political science at the University of Illinois at Urbana-Champaign and wrote her dissertation on the Maastricht Treaty on European Union.

This article originally appeared in two parts, in the winter & spring 2001 issues of the Pride At Work newsletter.

Pride At Work is proud to announce that Pauline Park will be a featured speaker at the June 2001 Pride At Work Convention. Pauline will focus her presentation on international political economy and the LGBT movement. This article (and Part Two, which will highlight the role of the LGBT labor movement in the global economy) make clear the theoretical strength, as well as political experience, Pauline will bring to her remarks. Mark your calendar now: Pride At Work 4th Biennial Convention, Everett, Washington, June 21-24, 2001!

In Part I (Convention Previews), I examined the phenomenon of globalization and the dilemma for governments of the left that come into power only to implement economic policies associated with the right. In this article, I would like to examine the prospects for change and the role of the LGBT labor movement in fostering such change.

Pauline Park will be speaking on international political economy and the LGBT labor movement at the Pride At Work 4th Biennial conference in Everett, Washington.

One thought on “Globalization & the Challenge to the LGBT Labor Movement”