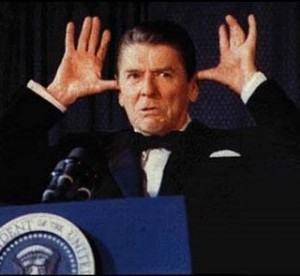 Perhaps the most frequently played news clip during ‘Reagan week’ was the excerpt from Reagan’s June 1987 speech at the Brandenburg Gate, with Reagan shouting, ‘Mr. Gorbachev, tear down this wall!’  The notion that Reagan’s speech brought down the Berlin Wall is pure fiction.  Crediting Reagan not only ignores Mikhail Gorbachev’s central role but also trivializes the work of ordinary East Europeans in bringing about their own liberation from decades of Communist oppression.  In 1989, ordinary East Germans who courageously took to the streetsto demand real democracy from the German Democratic Republic (GDR); at the same time, the reform Communist government in Hungary opened the border with Austria so that East Germans could cross into West Germany, which they did in large numbers.  Gorbachev forbade Erich Honecker from opening fire on the East German people in order to preserve the faltering regime and ruled out Soviet intervention, making inevitable the collapse of the oppressive and sclerotic  GDR regime.  Equally fictitious are the grandiose claims that Reagan ‘brought down Soviet Communism’ and ‘ended the Cold War.’  The truth is that the Soviet Union constituted a corrupt and inefficient authoritarian regime that simply could no longer be sustained.  When Mikhail Gorbachev came to power in 1985, he unleashed centrifugal forces that he could not control, leading to the unraveling of the Soviet empire in Eastern Europe in 1989 and the dissolution of  the Soviet Union itself in 1991. Reagan just had the ‘luck of the Irish’ (as he would call it) of being in office when the collapse of the Soviet empire began.

The true legacy of Reagan’s anti-Communist foreign policy can be found in Latin America, Africa and Asia, where the US pursued a retrograde and ineffective policy of anti-Communist ‘rollback.’ The Reagan administration funneled funds to right-wing death squads that tortured and murdered tens of thousands throughout Central America.  Some of that funding contravened US law, but despite the revelations of the Iran-Contra affair, no Reagan administration official ever served time for his illegal activities.  Perhaps Reagan’s most abiding foreign policy legacy is the genocide of the indigenous Maya of Guatemala under Gen. Efraim Rios Montt.

How will I remember Ronald Reagan?  As a genocidaire responsible for human rights atrocities on a vast scale. Reagan was the smiley face on mass murder.  None of the innocent men, women, and children murdered by Reagan’s cronies will ever have a state funeral that Reagan himself enjoyed (at US taxpayers’ expense).  Their bones cry out for justice. If we cannot offer them justice, then at the very least, we owe them an accurate account of history.

This article was originally written in response to an invitation from Queers for Economic Justice to contribute to a progressive retrospective on Ronald Reagan’s legacy shortly after his death in June 2004.