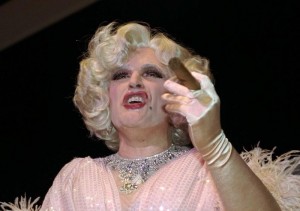 As Rudolph William Louis Giuliani pursues his candidacy for for the Republican nomination for president of the United States, the former mayor of New York City is almost invariably described by the mainstream media as “pro-gay rights.” That reputation is largely based on a few high-level appointments to his administration and his signing a domestic partnership bill into law while mayor. But as Giuliani attempts to court the religious right in his drive for the Republican nomination, he seems to be retreating from his support even for such limited measures as domestic partnership. And there is nothing in his record as mayor to suggest that he was or is supportive of transgender rights, despite his now-famous (if not notorious) appearance in drag as ‘La Rudia.’ As members of the lesbian, gay, bisexual and transgender (LGBT) community evaluate Giuliani’s candidacy they should carefully consider his opposition to Int. No. 24, the transgender rights bill ultimately enacted by the New York City Council as Local Law 3 of 2002 after he left office.

When the New York Association for Gender Rights Advocacy (NYAGRA) was working in partnership with the Empire State Pride Agenda on the campaign for that legislation, we faced two formidable obstacles: the mayor and the Speaker of the City Council. Giuliani never made public his opposition to the bill, but behind the scenes, he conspired with then-Speaker Peter Vallone to keep the bill from coming to the floor of the Council for a vote, where we had a majority of Council members pledged to vote for it. We succeeded in pressuring the Speaker to authorize a public hearing on the bill (first introduced by Council Member Bill Perkins as Int. No. 754) in the General Welfare Committee in May 2001, and Vallone needed an excuse for keeping the bill bottled up in committee; Giuliani provided it in the form of a legal opinion from Martha Mann Alfaro (then deputy chief of the division of legal counsel in the office of corporation counsel). The March 1 memorandum advanced the spurious assertion that transgendered and gender-variant people were already protected under City human rights law, flatly contradicting the opinion that the Commission for Human Rights had offered us in April 1999, that only post-operative transsexuals (and possibly transitioning transsexuals) were covered under existing case law. Giuliani’s human rights commissioner, Marta Varela, used the Alfano memo as the basis for her claim that there was no need to make explicit the inclusion of gender identity and gender expression through statute, which she made when testifying against the legislation at the May 4 hearing. Both Giuliani and Vallone continued to insist that legislation was unnecessary, disingenuously hiding behind a memo from a staff attorney who had no expertise on transgender law. It was clear to me that Giuliani simply did not want a transgender rights bill to come to his desk, which would have forced him to choose between signing a bill into law that he did not want to sign and vetoing the bill with the strong risk of alienating his support within the LGBT community, which was not inconsiderable.

Ironically enough, anyone engaging in the kind of on-stage drag antics that Giuliani became famous for could have been fired before enactment of that ordinance, but of course, as mayor of the city of New York, Giuliani (a.k.a., ‘La Rudia’) was not vulnerable to termination of his employment for drag performance or cross-dressing off-the-job, even while transgendered and gender-variant people in this city continued to face discrimination based on gender identity and expression without any form of legal redress for the duration of his term as mayor. It was only when term limits forced Giuliani and Vallone from office in December 2001 and a new mayor and a new speaker came into office that we were able to move the bill forward. In January 2002, Councilmember Perkins re-introduced the bill as Int. No. 24, Speaker Gifford Miller brought it to the floor of the Council for a vote on April 24 — where it passed by a historic margin of 45-5 — and on April 30, the new mayor, Michael Bloomberg, signed the bill into law.

As LGBT people across the country look at Giuliani and his record on LGBT issues, they should consider the fact that, while mayor, Giuliani did everything within his power to block the New York City transgender rights bill, but disingenuously refusing to acknowledge his opposition to that legislation. A careful examination of Giuliani’s two terms will show that his reputation as a ‘pro-gay’ mayor of New York has been considerably exaggerated; only in comparison with the profoundly homophobic core of the national Republican Party would someone like Giuliani look ‘pro-gay.’ Now that he is running for the Republican presidential nomination, Giuliani seems to be running away from even the more positive aspects of his record as mayor, raising serious questions as to whether we would find an ally in a Giuliani White House, let alone a reliable ally.

This analysis originally appeared as a blog post on BigQueer.com on 10 July 2007.