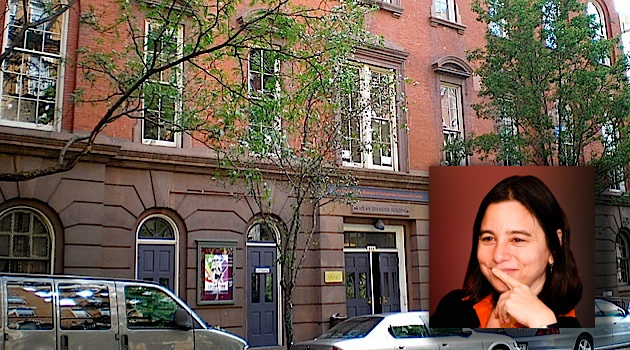 Green Light: Sarah Schulman hopes she can now go forward with a talk about her book, which is critical of Israel, at the LGBT Center.

A debate over Israel is roiling New York’s gay and lesbian community.

Days after barring a talk by gay scholar Sarah Schulman about her new book that criticizes Israel, a leading New York gay community center effectively reversed its decision amid heavy protest and allowed the event to go forward.

But the officials condemned Israel critics’ “pinkwashing” theory, which holds that Israel exploits its progressive attitude toward gay men and lesbians to mask oppression of Palestinians.

The growing cachet of the pinkwashing theory, of which Schulman is a leading promoter, has some gay leaders and Jewish communal advocates worried. Of particular concern to these officials is an academic conference on the topic, scheduled for April at the City University of New York and organized by Schulman.

Jewish communal officials assert that Schulman’s pinkwashing argument is prevalent only on the fringes of gay debate.

“I think the consensus is that this is the same anti-Israel left that’s been around for 30, 40 years in a new context,” said Jay Michaelson, founding director of the LGBT organization Nehirim and a Forward contributing editor. “This does not represent the gay mainstream or the wider LGBT movement or most academics doing this work,” he said, referring to the April CUNY conference.

“I think it’s very clear that this whole concept of pinkwashing is only even known of by a very fringe and radical group within the LGBT community,” said Hindy Poupko, director of Israel and international affairs at the Jewish Community Relations Council of New York.

Yet some activists see increasing criticism of Israel in the gay community — and are cheering it on.

“I think that the fact that the LGBT community center in Manhattan reversed its position on this issue… and lifted the moratorium on discussions of Israel/Palestine will be seen in the coming years as a signal event,” said Pauline Park, a co-founder of Queers Against Israeli Apartheid, the group that put in to host the Schulman event at the center.

At the center of these controversies is Schulman, who is a professor of English at CUNY’s College of Staten Island and a novelist. In November 2011, Schulman, who is Jewish, published a highly controversial op-ed in The New York Times that popularized the term pinkwashing.

“The Israeli government is cynically manipulating the hard-won gains of the LGBT movement in Israel to use them to whitewash or ‘pinkwash’ the occupation,” Schulman told the website Buzzfeed in the days before the center reversed its decision. “Queer people have not fought for so long to be used by a racist government to justify human rights violations.”

Schulman, through her writing and her new book, titled “Israel/Palestine and the Queer International,” aims to spread the pinkwashing argument. She planned to discuss her new book at the on-again, off-again reading at the center, a major New York City gay institution that is located in Manhattan’s West Village.

The center’s whiplash reversal came after two years in which the center had declared a moratorium on renting any space to groups addressing the Israeli-Palestinian conflict. The center announced the lifting of the moratorium at 4:50 p.m. on February 15, the Friday leading into a three-day weekend. The group had come under mounting pressure following a February 13 report in Gay City News that the center had declined to allow Schulman to discuss her new book.

In an emailed statement, the center announced that “the moratorium is no longer in effect.” A representative declined to offer comment beyond the statement, and did not respond to a request for comment made on February 19.

In its statement on the lifting of the moratorium, the center outlined a process for filing complaints about events held in its space, saying that if community members “feel that hate speech or bigotry has occurred at the Center,” they can file a written complaint.

Schulman said in an email to the Forward on February 19 that the center had yet to respond to a resubmitted request to rent space for the event. She praised the reported reversal of the ban.

“The community showed their heartfelt belief in open expression and caring for each other, proving yet again that our common value is social justice,” she wrote in an email.

The moratorium was imposed in 2011, following a controversy over an activist group’s plans to rent space for a party associated with the pro-Palestinian nationwide event known as IsraelI Apartheid Week. At the time, the pro-Israel gay activist Michael Lucas threatened to organize a boycott by donors if the event was allowed to go forward. In response to efforts by Lucas and others, the center announced that it would no longer allow any Israel-related events to be held in its space.

In an interview days before the moratorium was lifted, Lucas noted that because of the moratorium, he had not brought his new pro-Israel film about gay life in Israel to the center, either.

Lucas responded strongly to news of the lifting of the ban. “I would advise people to stop donating to the center and believe the city should stop funding an organization whose original mission of helping gay people has changed to providing a platform to anti-[Israeli] hate groups,” he wrote in an email.

Almost immediately after the moratorium was lifted, a group of gay elected officials praised the new guidelines. The group included Quinn, who is running for mayor, City Councilman Jimmy Van Bramer, Assemblywoman Deborah Glick and state Sen. Brad Holman. In the same statement, the officials criticized the notion of pinkwashing.

“We vehemently oppose the absurd accusations by some groups that Israel is engaged in so-called pinkwashing. We find this cause offensive and fundamentally detrimental to the global cause of LGBT equality,” the officials wrote.

Poupko said that the speaker’s office had a brief, routine consultation with the JCRC about the statement before it was issued.

The criticism of pinkwashing from the elected officials comes a month before the CUNY conference organized by Schulman, titled the “Homonationalism and Pinkwashing Conference.” The academic conference, which will feature 189 speakers, will address “Homonationalism.” According to conference materials, this is something that “occurs when sub-sectors of specific gay communities achieve legal parity with heterosexuals and then embrace racial and religious supremacy ideologies.”

Jewish activists say they have decided not to protest the conference vocally. “This is a small group of radical left scholars, so the consensus is to allow academic freedom and just ignore [it],” Michaelson said.

Though Israel is not mentioned in the description on the conference website, a call for papers issued in 2012 speaks at length about pinkwashing and Israel. Some of the accepted papers will address pinkwashing in Israel, according to a published conference schedule.

In an email, Schulman said that there was no conflict between the two descriptions of the conference.

“The conference is on two themes; most of the papers are on homonationalism, but there are two panels on pinkwashing and one on Zionism, plus various papers on Israel situated within broader panel topics,” Schulman wrote. “It was never intended to be otherwise.”