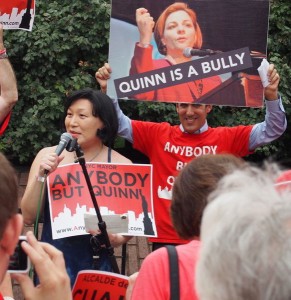 I’m here to pose and answer just one question: who is the real Christine Quinn? This is a multiple choice question, and I’m going to ask you to tell me which of the following answers is the correct one:

a) A principled progressive, as she portrays herself of the public.
b) A committed champion of LGBT rights.
c) A woman warrior for equal rights who has worked as Speaker to improve the lives of all women, regardless of race, ethnicity or class.
d) A stalwart defender of St. Vincent’s Hospital.
e) None of the above.

You can see from where we’re standing that Chris Quinn was no stalwart defender of St. Vincent’s Hospital. The answer, as you’ve discerned, is (e): None of the above.

I’ve known Chris Quinn for 14 years now and I’ve observed a pattern of manipulation, deceit and betrayal. I led the campaign for the transgender rights law enacted by the New York City Council in 2002. Chris Quinn was one of the lead sponsors of the bill, but did she help us get it passed? Quite the contrary: she tried to seize control of the bill to use for her own selfish political purposes.

I was part of the steering committee that led the campaign for the Dignity in All Students Act enacted by the New York City Council in 2004, which the Council enacted over Mayor Michael Bloomberg’s veto. When Chris Quinn became Speaker in 2005, did she help us get the Department of Education to implement the law? Not at all; Quinn conspired with Bloomberg and with Chancellor Joel Klein to prevent DASA’s implementation, giving them political cover by working with them to create an anti-bullying program that was nothing but window dressing; and as a result, bullying and bias-based harassment have continued to be pervasive in our city schools.

Finally, let me mention the New York Police Department’s stop-and-frisk policy. In my neighborhood — Jackson Heights in Queens — the NYPD is using stop-and-frisk as part of a campaign of harassment and intimidation directed towards LGBT people of color and transgendered Latina women in particular. And who is the one candidate in the Democratic mayoral race who has promised to reappoint Raymond Kelly as police commissioner — the very person directing that campaign? Chris Quinn.