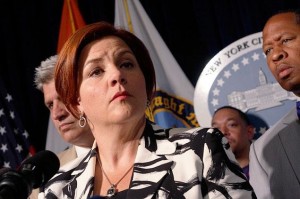 Christine Quinn would have been the first woman and the first member of the lesbian, gay, bisexual and transgender (LGBT) community elected mayor of New York City had she won the 2013 mayoral race. The fact that Quinn started the campaign as the clear frontrunner, with polls showing her at somewhere near 40%, but finished a distant third with a mere 15.5% of the vote on September 10, has fueled charges of sexism and homophobia.

“Her sexual orientation and her domestic arrangement may have hurt her,” blogged Lisa Miller (“Christine Quinn Got A Raw Deal—Because She’s a Woman,” New York, 9.13.13), putting her “squarely in society’s most reviled demographic category: middle-aged women without children — the jealous queens and kidnappers of Disney movies. Quinn’s devastating loss stands as proof that in the privacy of the voting booth we are even less post-chauvinist than we are post-racial in our preferences.” How then would Miller explain Letitia James – another middle-aged woman without children – winning first place in the public advocate’s race with 36%?

“Did Christine Quinn Lose the New York Mayoral Race Because of Sexism?,”  asks (New Republic, 9.15.13). “I suppose it’s somehow less hurtful to accuse hundreds of thousands of people of sexism than it is to pick on a specific person,” he writes, pointing out that Miller lacks a ‘coherent argument,’ her case resting on a questionable analogy to the 2008 Obama/Clinton race, which Miller asserts that Obama won purely because of sexist attacks on Hillary. “Next time she indicts a large chunk of the country’s biggest city,” Chotiner concludes of Miller’s assertion, “she should have better evidence than a 2008 presidential campaign—which was utterly unrelated to Quinn’s candidacy—and a handful of adjectives in a New York Times article” referencing polls in which voters described Quinn with terms often used to denigrate women in power. But the mayoral candidate with the highest unfavorable rating was Anthony Weiner (around 55%); Quinn had only the second highest negatives (around 45%).

In fact, Quinn’s status as the only woman and the only LGBT candidate in the mayoral race were arguably two of her biggest assets. Edison Research exit polls showed that primary voters were disproportionately female (54%), which should have helped the only female in the mayoral primary.

“Women don’t support women to the extent they should,” openly lesbian Assembly Member Deborah Glick opined on primary night (“Frontrunner Status Evaporated, Quinn Runs Well Behind de Blasio, Thompson,” Paul Schindler, Gay City News, 9.11.13). But Ruth Messinger won the 1997 Democratic mayoral primary outright with 40% and had none of the problems generating support from other women that Quinn did. “There was a lot of misogyny coming out of the Anyone But Quinn movement,” Glick asserted. But ABQ was co-founded by one woman (Wendy Neu) and another woman (Allie Feldman) was one of its lead organizers.

ABQ was substantially funded by NYCLASS – a 501(c)4 non-profit animal advocacy organization – in response to the Speaker’s having blocked the entire legislative agenda of the city’s animal rights activists, including Donny Moss, a gay constituent of Quinn’s, who played a leading role in the ABQ campaign. But it was not only the Speaker’s role as Cruella de Quinn – enemy of our hoofed friends in Central Park and our furry friends in all five boroughs – that fueled the movement against her, unprecedented in recent mayoral campaign history. In “Roots of Betrayal: The Ethics of Christine Quinn,” gay Queens-based activist Louis Flores documented a host of ethical and legal infractions, including the celebrated slush fund scandal that prompted the Speaker to push the term limit extension bill through the Council, allowing Bloomberg – and Quinn herself – to run for a third term. Quinn’s biggest strategic error was her inability to craft an effective or even a coherent response to the palpable voter anger over her instrumental role in enacting legislation that overturned two successive public referenda limiting the terms of the mayor and Council Members.

Quinn started out the primary campaign season as the prohibitive frontrunner with at least the tacit support of billionaire Mayor Michael Bloomberg and the active support of a host of wealthy donors, including some of the city’s biggest developers. In contrast, stuck in fourth place around 14% in the polls only a few months before the primary, Bill de Blasio was written off by many.

The first openly gay Council Speaker also had the entire gay political establishment behind her, including the Empire State Pride Agenda, the Stonewall Democratic Club, Lambda Independent Democrats (LID), Gay & Lesbian Democrats (GLID), the Gay & Lesbian Victory Fund and the Human Rights Campaign (HRC), along with women’s organizations such as Emily’s Fund and the National Organization for Women-NYC. Quinn was also endorsed by Gay City News, the only LGBT weekly newspaper in New York, along with the New York Times, the New York Daily News and the New York Post.

Quinn also had the support of a dozen labor unions, including two of the biggest unions in the city: 32BJ and the Retail, Wholesale & Department Store Union (RWDSU). She had the backing of the Queens County Democratic Party organization, the most powerful of the city’s political machines, which put her in the Speaker’s chair back in 2005; and over 50 elected officials as well as a host of celebrities and activists (http://www.quinnfornewyork.com).

But despite the backing of the city’s powerful elites, come Sept. 10, Quinn placed a distant third, with a paltry 15.5% of the vote, losing every Democratic Party constituency. Quinn got only 16% of women vs. 39% for Bill de Blasio and 26% for Bill Thompson (“New York City Primary Results,” New York Times, 9.10.13). As Sam Roberts noted (“Identity Politics in a Brand-New Form,” New York Times 9.15.13), “de Blasio carried white women 36 to 26% and black women by a crushing 47 to 6%.” And just as women rejected Quinn by a two-to-one margin, a majority of LGBT voters also rejected her candidacy. Edison found Quinn winning just a third (34%) of self-identified LGBT voters, well behind de Blasio, who won half (47%) of the LGBT vote.

Did 74% of white & 94% of black female Democratic mayoral primary voters follow the lead of some phantom misogynist bogeyman?  Did a wave of homophobia sweep the first openly lesbian mayoral candidate into the dustbin of political history? There simply is no evidence that misogny or homophobia played a role in influencing the primary electorate, which put three new openly gay Council Members in office: Carlos Menchaca in Brooklyn (the 38th Council district), Ritchie Torres in the Bronx (the 15th) and Corey Johnson in Quinn’s own 3rd Council district (“From Three Boroughs, New Gay Councilmen,” by Paul Schindler, Gay City News, 9.10.13). And on that same day that the only female mayoral candidate went down to a crushing defeat, women won primaries for borough president in both boroughs where a woman competed – Gale Brewer in Manhattan and Melinda Katz in Queens.

“I don’t know that the LGBT community is always strategic in their thinking,” Glick added to her entirely non-empirical assessment of Quinn’s defeat. But how ‘strategic’ is to support candidates based purely on their sexual orientation or gender identity, without reference to issues of race, ethnicity, class, economic policy, position on policing issues, or any of the important issues facing this city? As a transgendered Asian American woman, did I have an obligation to vote for Chris Quinn as the only female candidate in the race? Or an obligation to support John Liu as the only Asian American running for mayor? And if those were competing claims, which should have carried more weight? In the end, I voted for the candidate I thought would make the best mayor, Bill de Blasio.

As I see it, a crude identity politics such as Deborah Glick, Lisa Miller and others espouse can do nothing but impoverish public discourse in this city – the most diverse in the United States – and distract us from the pursuit of progressive policy change. Fortunately, on Sept. 10, women and LGBT voters rejected the crude appeal of such a simplistic identity politics; in fact, Quinn even lost her own Council district to de Blasio, a stunning indicator of the complete collapse of her campaign.

The real explanation for the catastrophic collapse of Quinn’s campaign was neither misogyny nor homophobia but the fact that she was a bad candidate who ran an awful campaign and that Democratic primary voters were sick and tired of 12 years of Bloomberg and the mayoral candidate most closely associated with him. Quinn’s Rose Garden strategy was premised on creating the expectation that her nomination was inevitable – and in that regard at least was analogous to Hillary’s failed strategy in 2008. Quinn, like Thompson, ran a general election campaign in the primary, attempting to appeal to moderates and independents whom they believed they would need to attract once they won the nomination; but de Blasio understood that the primary would be won by the candidate who could best appeal to a progressive primary electorate.

Quinn’s failure to distance herself from the mayor meant that she was widely perceived as his tacit choice among the Democrats. Between the Scylla of Quinn’s ties to Bloomberg – including to wealthy donors many of whom were his cronies, and the pro-Bloomberg Democrats who were a significant minority of the primary electorate – and the Charybdis of the more progressive primary voters who were fed up after 12 years of Bloomberg, Quinn was left without a winning campaign theme. Quinn’s claim that she was the only candidate who had ‘delivered for New Yorkers’ rang hollow, an empty slogan reminiscent of the 1988 Dukakis campaign that was all about ‘competence.’ What Quinn had effectively ‘delivered,’ primary voters knew, was a third term for Bloomberg, and that was the real albatross around her neck. In a change election, Quinn was tied inescapably to the Bloomberg administration in which she was de facto deputy mayor, and as de Blasio’s campaign took off in the last few crucial weeks of the campaign by promising regime change, the big dead bird around Quinn’s neck dragged her down and sunk her.

Pauline Park is a transgender activist who participated in the Anybody But Quinn campaign but is not a spokesperson for it; she did her Ph.D. in political science at the University of Illinois.