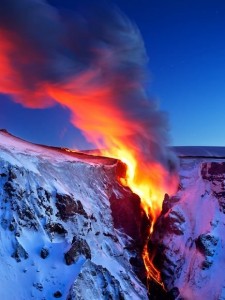 Given the geologically active terrain of Iceland, it’s probably no surprise that the Vikings who settled there would produce such vivid creation myths and other legends. Who could forget the eruption of Eyafjallajökull in 2010? “Völuspá” is the first and most celebrated of all the poems in what has come to be known as the ‘Poetic Edda,’ and tells the story of the creation of the world out of nothingness. “Völuspá” undoubtedly influenced J.R.R. Tolkien’s creation story in “The Silmarillion.” To get the full flavor of the Old Norse and in order to get a sense of the rhythm of the poem it really has to be read in the original. Here’s the second of 66 stanzas in all its Old Norse Viking magnificence (along with an English translation for those of you who don’t read Old Norse):

It was early in the ages,
when nothing was,
there was neither sand nor sea
nor cool waves;
Earth was nowhere to be found,
nor sky above,
a gap there was of yawning spaces
and nowhere grass.