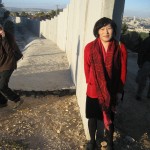 The author, Pauline Park, at the gap in the separation wall at Al-Wallaja east of the Israeli frontier. (Photo courtesy Park)

“The concept of ‘pinkwashing’ emerged as a hot topic throughout the week,” Kevin Naff wrote of his participation as part of “a delegation of nine LGBT leaders from the United States” to Israel in November (“Israel as ‘gay heaven’? It’s complicated,” Times of Israel, Nov. 10). The delegation tour was sponsored by Project Interchange, a program of the American Jewish Committee, which is aggressive in its defense of the Israeli occupation of Palestine.

Naff quotes a speaker who addressed the group, Gal Uchovsky, as telling the delegates “that we had arrived in ‘gay heaven’” and that Israel is “the best LGBT country in the world” whose “LGBT residents face no serious problems that he could identify.” My Israeli friends would certainly contest Uchovsky’s absurd claim that LGBT Israelis “face no serious problems.” Fortuntely, Naff was able to recognize Uchovsky’s propaganda for what it was.

One would get a very different impression speaking primarily or exclusively with wealthy gay Jewish Israeli men in North Tel Aviv — as Naff and his fellow delegates seem to have done — than if one spoke with LGBT Israelis from more marginalized communities, including lesbians and bisexuals, who often feel marginalized by gay men in Tel Aviv and elsewhere in Israel; transgendered women, who face police harassment and brutality in Tel Aviv and other cities in Israel just as they do in New York and other U.S. cities; Israelis who face discrimination because of their of Mizrahi (Sephardic) Jewish ethnic origins; or refugees from Africa and elsewhere who may be LGBT (though not necessarily openly so) but who have no right to remain in Israel, because the state of Israel does not recognize non-Jewish economic refugees or those fleeing political persecution — regardless of their sexual orientation or gender identity.

And that’s not even to mention the pervasive discrimination that Palestinians with Israeli citizenship face. As Prof. David Lloyd argued persuasively in a December 2013 analysis for the Electronic Intifada, the crucial distinction between “citizenship” (ezrahut) and “nationality” (le’um) in Israeli law privileges Jewish Israelis over Palestinians living in Israel because “citizenship” is in effect a second-class citizenship without nationality status.

“Some critics claim the country’s embrace of LGBT rights is merely a propaganda effort to claim the mantle of modernity and establish a stark contrast to homophobic regimes in the West Bank, Gaza and elsewhere in the Middle East,” Naff writes. In doing so, Naff is in fact rearticulating the very discourse in which Uchovsky was engaging in when describing Israel as a gay paradise — the attempt to use Israel’s record on gay rights (supposedly better than that of its Arab and Muslim neighbors) as a justification for an Israeli occupation that is illegal under international law, or at the very least as a means to distract attention from it.

Naff’s delegation appears to have met with only one Palestinian — “a scholar and Fatah and PLO adviser,” Abu Zayyad. But meeting with a single official with the Palestinian Authority — widely viewed by many West Bank Palestinians as little more than a tool of the Israeli occupation — hardly constitutes balance when the rest of the tour was devoted to meeting with LGBT Israelis and Israeli officials.

“The focus of the visit — LGBT issues — was often overshadowed by the frustrating stalemate of the Palestinian-Israeli conflict. Why can’t the two sides come to an agreement on a two-state solution? It’s complicated,” Naff writes. And yet, is the issue of the Israeli occupation of Palestine really that complicated? For all of the complications and complexities of the situation, it is at root quite simple: the indigenous people who have lived in Palestine for centuries are being systematically dispossessed of their land and their rights by a foreign military occupation that is illegal under international law and that even the United States does not recognize as legitimate. And that occupation makes no exception for Palestinians who might be LGBT/queer, who face the same restrictions and daily humiliations living under Israeli occupation as non-LGBT Palestinians. And contrary to propaganda in circulation, Israel is not and cannot be a haven or a refuge for LGBT Palestinians because there is no such thing as refugee status for non-Jews in Israel, regardless of sexual orientation or gender identity.

Rather than hearing pinkwashing propaganda from the likes of Gal Uchovsky, Naff and his colleagues would have learned far more if they had met with Palestinian villagers and farmers under siege from Israeli settlers and the Israeli military in the West Bank, as I have. I participated in the first U.S. LGBTQ delegation tour of Palestine in January 2012 and met with many Palestinians — both LGBT and non-LGBT — throughout the West Bank, from Nablus in the north to Hebron in the south and Ramallah in between. Staying two nights with a Palestinian family in Dheishe in Bethelem, one of the largest refugee camps in the West Bank, I had the opportunity to speak at length with Palestinians about conditions in the occupied territories.

Naff expresses his disappointment with the decision of alQaws and Aswat to decline the invitation to meet with his delegation. AlQaws and Aswat, two of the leading Palestinian LGBT groups, are doing vital work on behalf of queer Palestinians under extremely difficult circumstances that no U.S.-based LGBT organization has to face. The 16 members of my delegation met with members of both alQaws and Aswat for extensive discussions about the impact of the occupation on LGBT Palestinians, and those discussions were productive and enlightening. It seems to me that Naff’s group of relatively privileged LGBT Americans should have recognized how problematic it was to demand that LGBT/queer Palestinians either facing pervasive discrimination within Israel or living under a crushing foreign military occupation in the West Bank engage them in dialogue, which is the privilege of the powerful. True dialogue is simply not possible when one party is holding a gun to the other’s head, which is what “dialogue” with a people living under a brutal and illegal military occupation represents.

I might add that members of Naff’s delegation could have found opportunities to engage with LGBT/queer Palestinians even before leaving the U.S. and could do so now that they are back from their tour; they can also feel free to engage members of New York City Queers Against Israeli Apartheid if they wish to hear our views on Palestinians and the Israeli occupation.

Given the intransigence of the government of Binyamin Netanyahu — the most right-wing prime minister in Israeli history — and his determination to move forward with the ethnic cleansing of East Jerusalem and the de facto annexation of the West Bank, it seems to me that only boycott, divestment and sanctions (BDS) against apartheid Israel will advance the cause of the peaceful resolution of the impasse that the Israeli government itself has created with its endless occupation of Palestine and construction of an apartheid regime.

Pauline Park is a member of New York City Queers Against Israeli Apartheid, founded in 2011. She was a member of the first U.S. LGBTQ delegation to Palestine in January 2012.

(Kevin Naff responds: After members of our LGBT delegation expressed concerns that we were not given access to more of the Palestinian perspective, Project Interchange arranged a follow-up conference call in November with Dr. Khalil Shikaki, director of the Palestinian Center for Policy & Survey Research. I shared Pauline Park’s concerns over pinkwashing, but Project Interchange worked hard to present a balanced itinerary, which included visits to the West Bank, Ramallah and the edge of the Gaza Strip. I welcome Park’s invitation to learn more about NYCQAIA and will follow up with her.)

This op-ed was published by the Washington Blade and appeared in the 6 January 2014 issue of the paper.