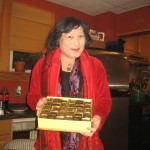 2013 was a challenging year but a good and productive one for me. It was the first full year that I’ve served as acting executive director of Queens Pride House, and my work for the LGBT community center of Queens dominated the year. In addition to staff management & overall direction, I organized public forums on NYPD stop-and-frisk policing, the human trafficking of Asian women in Queens, and the Israeli occupation of Palestine from a progressive LGBT perspective. I also continued to do work as chair as the New York Association for Gender Rights Advocacy, representing NYAGRA in the coalition that is working for enactment of the Gender Expression Non-Discrimination Act (GENDA), the transgender rights bill (still) pending in the NYS Senate after 11 years. And I continued my involvement with the Palestine solidarity movement, primarily through the NYC Queers Against Israeli Apartheid (NYC QAIA). I did more writing and speaking, including speaking engagements at Mills College in Oakland and the Center for Lesbian and Gay Studies of the Pacific School of Religion in Berkeley in April. And I was honored to give three keynote speeches this year: at the transgender politics symposium at the Institute for Research on Women at Rutgers University in April, the first annual Diversity Day LGBT pride event at St. Barnabas Hospital in the Bronx in September and the social sciences open house at Marymount Manhattan College in October. I was delighted to be invited to speak on a UU-UNO panel on gender-based violence in March LGBT/queer history at Pace University in Manhattan at the end of October and to speak about my own activism at KASCON 26 (an annual Korean American student conference) in March. It was great to participate in an APICHA/Q-Wave workshop on queer API identities and coming out at Project Reach in Manhattan in April; a workshop on race, class & age at the Philadelphia Trans Health Conference in June; and a panel discussion at the Center for Lesbian & Gay Studies (CLAGS) homonationalism & pinkwashing conference at the CUNY Graduate Center in April. I also continued to participate in the Philosophy Forum, an LGBT discussion group that I’ve been a member of since 1997, leading a session on Sunzi and “The Art of War” in May. And it was great to participate in a NYC Bi Book club in the fall. I also represented NYAGRA at the annual summer meeting of the Equality Federation, which took place in Salt Lake City in July. And that trip gave me the opportunity to do genealogical research at the Family Research Center there. I participated in a transgender community consultation in San Francisco, which gave me the opportunity to spend a few days in that magical city. I continued to participate in the NYC Area Friends of Tolkien & Fantasy Meetup Group, enjoying the second installment of “The Hobbit” series with them in December. I celebrated two great political victories this year. The first came in February, when the LGBT Community Center in Manhattan lifted a 2-year ban on QAIA and we organized a hugely successful forum with Sarah Schulman about her new book, “Israel/Palestine & the Queer International.” The second came with the defeat of NYC Council Speaker Christine Quinn in the Democratic mayoral primary in September, after a successful Anybody But Quinn campaign in which I played a small role. I made new friends and reconnected with old ones. And I made progress adding to my repertoire, working on pieces by various composers (including Bach, Mozart and Chopin) as well as piano transcriptions of various songs (including “September” and “Beim Schlafengehen” from the Four Last Songs of Richard Strauss). I worked on my languages, including working to learn hangul (the Korean alphabet). I dreamt more in French, including giving an entire lecture on French foreign policy under De Gaulle and Pompidou in one such dream. And I had my first tri-lingual dream, dreaming (briefly) in French, German and English. All in all, an extremely productive year which I’m truly grateful to have had~!