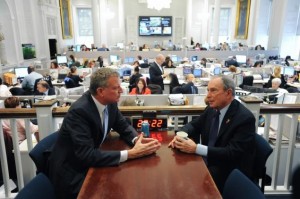 “What is definitely off-target is the notion, which the New York Times repeated Saturday but certainly didn’t invent, that ‘more managerial’ appointees are somehow ideologically neutral. This misconception underlay a lot of the skewed analysis of the Bloomberg administration, which was seen as apolitical, as merely interested in unimpeachable goals like efficiency and transparency,” writes Jarrett Murphy (“De Blasio’s Cabinet Is Dominated by Lefties. Wait. Really?,” the Nation, 3 March 2014). Murphy was responding to Nikita Stewart, who wrote, incredibly enough, “In Bill de Blasio’s City Hall, it seems more and more, there is only a left wing. The mayor, who advanced in politics by grass-roots organizing, has built a team filled with former activists” (“De Blasio Picks More Liberal Activists Than Managers for City Posts,” New York Times, 1 March 2014).

Stewart’s entire article seems to be a generalization based on just one appointment — that of Steven Banks as commissioner of the city’s Human Resources Administration — who strikes me as the exception that proves the rule; he’s the only activist I’ve heard that de Blasio has appointed to his administration, which is filled with City Hall insiders and Bloomberg administration re-treads. Carmen Fariña, his schools chancellor, is the only other interesting appointee in the entire administration, which is chock-full of establishment types. What I see is a new mayor setting a slightly different tone but apparently determined to continue to pursue Bloomberg administration policies in most areas with Bloomberg’s people in charge in many.

The New York Times got it doubly wrong, both in pegging the de Blasio administration as being a bunch of leftist activists and also in characterizing the Bloomberg administration as a group of politically neutral technocrats. Bloomberg articulated and enforced an ideology of authoritarian plutocracy, using the resources of the City of New York to enrich the already rich and the super-rich at the expense of everyone else; and except for the presence of two or three activist types, de Blasio’s new administration is not much different from Bloomberg’s in terms of actual policy output. But why should anyone be surprised by the Times getting it wrong this time around? The Times has never been all that interested in the city in which it’s based, except as a source of revenue; no one turns to the Times for coverage of local politics & policy issues, because it just isn’t there and when it is, it’s almost always wrong. The Old Gray Lady is too comfortable being part of the 1% elite to condescend to consider the real world the rest of us New Yorkers live in~!