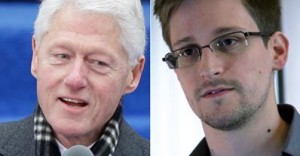 “Former President Bill Clinton called National Security Agency leaker Edward Snowden an ‘imperfect messenger,’ saying that he raised important questions about national security,” Politico is reporting (“Bill Clinton: Edward Snowden ‘imperfect’,” Politico, 9 April 2014). So here’s what Bill Clinton was perfect at: enabling massive corporate profits & union-busting by signing NAFTA into law; institutionalizing discrimination against LGBT people by signing DADT & DOMA into law; enabling genocide in Rwanda by refusing to intervene even though he was told by US as well as UN officials that a genocide was in progress but that it would only take 10,000 US soldiers a week or two to stop it. I don’t recall Edward Snowden having done anything so destructive as Bill Clinton, so for Slick Willie to call Snowden an ‘imperfect messenger’ when it comes to discussions of public policy is really rich — you might say, Marc Rich~!