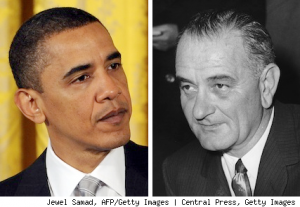 “Disappointed liberals, conservative critics and ordinary citizens who remember the candidate of 2008 have asked that question about Obama’s presidency. What has he been willing to fight for?,” Dan Balz writes of the famous reply that Lyndon Baines Johnson made to an adviser who suggested that Johnson avoid pushing civil rights legislation (Dan Balz, “Obama and LBJ: Measuring the current president against the past one’s legacy,” the Washington Post, 13 April 2014). “Well, what the hell’s the presidency for?” was LBJ’s response. Barack Obama quoted that reply in his speech at the LBJ Library on April 10 at a three-day conclave marking the 50th anniversary of the Civil Rights Act of 1964. I have great respect for Dan Balz, but there are 2 points that he’s missing here. First, the Affordable Care Act (ACA) is not Medicare; it’s health insurance reform that falls far short of true health care reform, which would entail truly universal health care. And second, it’s not simply the fact that Obama has no other legislative successes other than the ACA; it’s the fact that he hasn’t even tried to push a progressive policy agenda.

“For better or worse, Johnson represented the high-water mark for American presidents pushing through sweeping legislation — not just the Civil Rights Act, but the Voting Rights Act, Medicare, Medicaid, the Fair Housing Act and major measures on immigration, education, gun control and clean air and water. No president since has approached that level of legislative success,” writes Peter Baker (“For Obama Presidency, Johnson Looms Large,” New York Times, 8 April 2014), adding, “Certainly, Mr. Obama can point to landmark actions from his first term, most notably his health care program, the most significant expansion of the social safety net since the Johnson era.”

But the ACA is based on a Republican plan from the Nixon administration & is closer to a big corporate give-away than it is to true universal health care. In the absence of any other significant achievement, what will Obama’s legacy be?

At best, it will be largely symbolic: the election & re-election of the first African American president. But I think the real legacy will be the continuation of Bush administration policies, including immigrant deportations, drone strikes and mass NSA surveillance. Obama’s legacy will also include the criminalization of investigative journalism & the war on whistleblowers.

Ironically enough, the one real comparison with LBJ is the way in which Obama’s right-wing foreign policy & expansion of the national security state — rather like Johnson’s Vietnam War — has overwhelmed Obama’s extremely limited domestic policy agenda and undermined his attempts to claim a legacy of progressive policy-making.

But most damning of all, in my view, Obama’s legacy will be 8 years of missed opportunities to address the biggest threat to the planet, that of global warming; if it continues to accelerate as it looks to, then perhaps none of this will matter, because Obama will have allowed processes to continue that will lead to making the planet uninhabitable for human life, in which case, there will be eventually be no human beings to assess his legacy at all…