Henry VII & the Tudors on TV 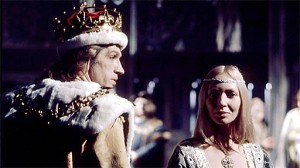 “‘The Shadow of the Tower’ is the third installment of the BBC’s series that was not (I believe) ever shown in the US. It is every bit as good as the first two, but it focuses on the less glamorous (or less famous) of the Tudor monarchs, Henry VII. But Henry VII is important not just as the founder of the Tudor dynasty but for his own achievements, probably too often eclipsed by his larger-than-life descendants, Henry VIII and Elizabeth I,” writes Geri, The History Lady. “The Shadow of the Tower” isn’t quite at the level of “The Six Wives of Henry VIII” and “Elizabeth R,” but those were the best historical dramas ever made for TV; but if you take it on its own terms, “Shadow” is pretty good, and it tells a very compelling story of the wily founder of the Tudor dynasty.

“The Shadow of the Tower” stars James Maxwell as Henry VII, the founder of the Tudor dynasty who has been overshadowed by his son & granddaughter but whose reign was not at all uneventful. Henry Tudor had only the most distant claim to the English throne and became king by force of arms, defeating Richard III at Bosworth Field in 1485; Richard III’s body was recently discovered under a parking lot. Henry VII was on the whole a good ruler, as parsimonious as his son was extravagant. The first Tudor king brought the Wars of the Roses to an end andj stabilized England, providing the basis for its further growth & development. Henry also laid the ground work for the United Kingdom by marrying his daughter Margaret to James IV of Scotland. But it was his granddaughter Elizabeth, born long after his death, who redeemed the Tudor dynasty’s distinctly mixed record after the disastrous reigns of her brother (Edward VI) and sister (Mary I). So when you’re watching Henry VII’s machinations in “The Shadow of the Tower,” think of the Gloriana to come~!