Avraham Stern, Menachim Begin & the founding of the state of Israel 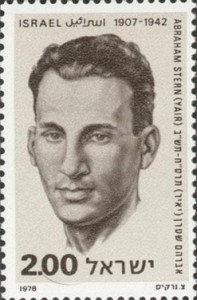 Avraham Stern’s death in British custody did nothing to end the activities of the Stern Gang, which “carried on fighting the British ruthlessly and effectively: two Sternists assassinated Lord Moyne, Churchill’s minister for the Middle East, in Cairo in 1944. In 1948 the group took part in the infamous Deir Yassin massacre, an important trigger for the flight of hundreds of thousands of Palestinian refugees, the centrepiece of the ‘nakbah.’ It also assassinated the UN mediator, Count Bernadotte,” writes Ian Black (“Long shadow over Palestine Killing, the Guardian), noting that “Stern’s men planted bombs, robbed banks and killed British officials as well as Jews and Arabs.” I doubt that many Americans would recognize Stern’s name, but he & his Stern gang, along with Menachem Begin & the Irgun, were at least as important as David Ben Gurion as founders of the state of Israel. One cannot understand the founding of the state of Israel in 1948 without understanding the logic of Avraham Stern, which was that the new state could not come about without destroying the British Mandate Authority through terrorism & without ethnically cleansing Palestine of its indigenous population; far from being an aberration, then, the current Israeli apartheid regime is really just the logica extension & completion of the work of Irgun & the Stern Gang, with the elimination of the Palestinian people being not only the goal of the Netanyahu government but of the Zionist founders; anyone who doubts that conclusion should talk to Count Folke Bernadotte; oh, wait, you can’t — he’s dead~!

One thought on “Avraham Stern, Menachim Begin & the founding of the state of Israel”