“‘Gauguin: Metamorphoses,’ which opens on Friday at MoMA in New York, recasts the artist as an altogether darker figure, closer to Edvard Munch and the dark pre-Freudians of Northern Europe than the post-impressionist confraternity of Van Gogh, Seurat and Cézanne,” Jason Farago wrote in his review (“Gauguin: Metamorphoses review – ‘Forceful, disturbing, obscene’,” Guardian, 6 March 2014) of the blockbuster exhibition that I was lucky enough to see before it closed, and it was indeed a revelation that shifted my view of this seminal artist. 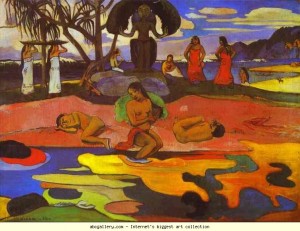 There is on the one hand the exoticization & objectification of Tahitian women, which is objectionable particularly in relation to the relationships he had with them; but on the other hand, there is also his primitivism, which is not simply an exoticization of a foreign culture by a colonial tourist, but is in fact the expression of a longing for & even reconstruction of a lost pagan culture that had already nearly disappeared when Gauguin arrived in Tahiti. In his rejection of what he saw as the hypocrisy & culturally destructive colonialism of French Catholicism in Tahiti, Gauguin was very much on target, and a balanced assessment of his art — as this exhibition gave us — needs to take that into account as well as the objectionable aspects of it as well. I will never look on Gauguin’s languorous Tahitian women again without also thinking of his invocations of Oviri~! 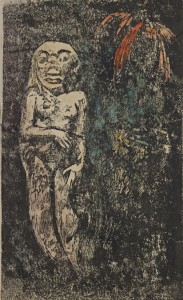