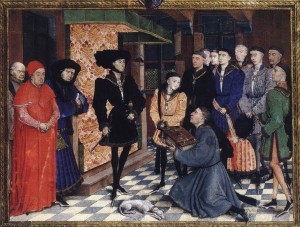 From 1364-1477, the duchy of Burgundy functioned virtually as an independent kingdom and the four ‘great dukes of the west (‘les grands ducs d’occident’) were wealthier and more powerful than the kings of France of whom they were nominally vassals. The court of the dukes of Burgundy was the most splendid in Europe and the dukes employed some of the greatest artists and composers working at the time.

All that splendor and gloire ended with the death of Charles le Téméraire (the 4th & last of the dukes) in the Battle of Nancy in 1477; but at the time of his death, he ruled virtually all of what are now the Netherlands, Belgium & Luxembourg as well as Burgundy & the Franche Comté (which are now both within the borders of contemporary France). 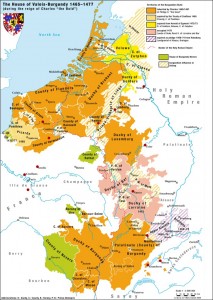 At the death of Charles le Téméraire (whose moniker can be translated as either ‘the bold’ or ‘the reckless’), Burgundy itself reverted to the French crown along with Picardy, while the Franche Comté and the Low Countries were retained by his daughter, Marie de Bourgogne, who married the Emperor Maximilian I, thus transmitting the ‘Burgundian inheritance’ and the legacy of the great dukes of Burgundy to the Habsburg dynasty. Burgundian court ceremonial was eventually transmitted to Spain through the Emperor Charles V (Maximilian’s grandson and the first King Charles of Spain).

The history of the duchy is a fascinating one & one can only wonder what might have happened if it had developed as an independent kingdom between Germany and France, which might have altered the entire trajectory of European history~!