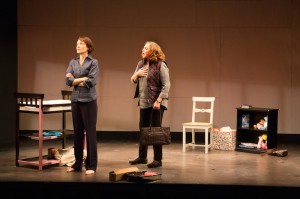 Goddess knows we need more transgender-themed plays, but is it too much to ask that they also be good? Unfortunately, this dog of a play won’t hunt. There are two basic problems with “Would You Still Love Me If…”: first, it peddles in tired old tropes about transgender identity; and second, it’s just not a very good play. I say this as someone who has written a play herself and studied theater and drama since junior high school as well as a transgender activist who has conducted hundreds of transgender sensitivity trainings and written extensively on gender identity and expression. The two problems are not at all unrelated, as the material of the drama often seems like a thinly disguised pretext for a rather misguided lecture on transgender identity and transition, while the revelations about Danya’s transition seem to be thrown out as pretexts to generate dramatic sparks on stage.

Without giving too much away, I think (plot spoiler alert for those who want to remain entirely in the dark before seeing it), I will sketch out the broad outline of  the action. Danya (Sofia Jean Gomez) and Addison (Rebecca Brooksher) are a lesbian couple who seem deeply in love with each other, but each has a secret. Addison’s deep dark secret propels her to arrange an adoption behind Danya’s back. But Danya is seeing a sex reassignment surgeon (Roya Shanks) behind Addison’s back; because the surgeon requires one responsible adult other than Danya to sign off on the surgery, she asks her mother, Victoria (Kathleen Turner) to do so.  Among the most absurd plot devices, it’s Dr. Gerard (Roya Shanks) who actually pushes Danya into what some call the ‘real life test’ as well as insisting that she pursue hormone replacement therapy (HRT) before being approved for sex reassignment surgery (SRS).

Watching this play, I got the sense that John S. Anastasi was a well-meaning liberal, possibly a gay man (just a guess; I don’t actually know what his sexual orientation is) who has suddenly discovered that transgender is the hot topic of the day and wants to simultaneously boost his playwrighting career and advance the cause of transgender rights through a play about a transman’s transition. But the characterization of Danya’s transition and Dr. Gerard’s role in it is so far-fetched that Anastasi is unlike to be successful with either objective. I know thousands of transgendered people, and I have yet to meet a single transman who has tried to go for phalloplasty (‘bottom surgery’) or even chest reconstruction (‘top surgery’) before first going on ‘T’ (testosterone, which is the basis for HRT for female-t0=male transsexuals). And the idea that someone who desperately desires surgery would flounce about in a revealing dress and heels pushes this play into a theater of the absurd without any of the significance of signification of Beckett and early twentieth century drama. Honestly, what transman is so clueless about and disconnected from the gender he identifies with that he has to be told by his own surgeon to stop wearing cleavage-revealing dresses and high-heeled pumps and start wearing more masculine attire?

And that’s where the rubber dildo hits the road. The completely unrealistic and frankly preposterous plot devices that jerk the audience forward for an hour and-a-half are based in good part on sensationalistic ‘reveals’ that contribute little to the audience’s understanding of transgender identity, despite well-meaning didacticism. And so what starts out as a potentially promising concept — the genuine tension that results from the announcement by one partner in a relationship (same-sex or opposite-sex) that s/he intends to transition to the other sex and gender — ends up trading on tired old tropes about sex change and selfishness. I have no idea how many real transgendered people he knows, but the playwright could have benefitted from even a half hour chat with me or observation at a meeting of the transgender support group that I run.

None of the actors struggling to make this ‘ungainly new play’ (as the New York Times critic called it in her review) work really succeed, not even the great Kathleen Turner, who is also the director of this sad and frankly embarrassing little affair; the material defeats them every time. “More plays about transgender experience will follow, and with them, perhaps, more poetry,” wrote Laura Collins-Hughes. I would be happy with halfway decent prose~!

Pauline Park, Ph.D. is a writer and an activist based on New York.