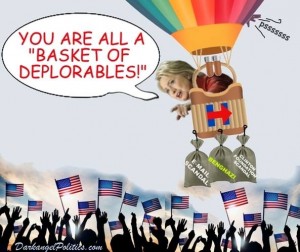 I think when pollsters, political scientists, historians & other analysts look back on 2016 & search for defining moments, one of them will be #HillaryClinton‘s LGBT ‘community’ fundraiser on Sept. 9 at Cipriani Wall Street, with tickets from $1,200 to $250,000 per plate (Gil Kaufman, “Barbra Streisand to Perform at LGBT-Focused Fundraiser for Hillary Clinton,” Billboard, 8.9.16).

The event was supposed to make news for the high profile LGBT guests (most of them wealthy gay white men from Manhattan) and the star power of its celebrities, including Barbra Streisand, but instead made news for her ‘basket of deplorables’ comment, which may well have been the 47% comment of this year, so much like the comment that helped derail Mitt Romney’s campaign four years ago. At the time, Hillary laughed off the controversy over her snobby, elitist comment disdaining a huge segment of the country, but the basket of deplorables certainly got their revenge on November 8.

But I think there are some serious issues raised by this event that go well beyond the gaffe that Hillary made with her comment. 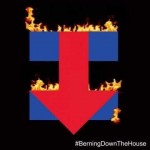 “We’re not going to fool people any more by telling them we are with them and we want to work for them and at the same time holding so many fundraisers with people who are not working people,” Reid J. Epstein and Janet Hook quote Eirka Andiola as saying (Reid J. Epstein and Janet Hook, “The Great Unraveling: In Their Coastal Citadels, Democrats Argue Over What Went Wrong,” Wall Street Journal, 18 November 2016). The political director for Our Revolution, an organization founded by supporters of Bernie Sanders, Andiola made a point that Democrats should take seriously but no doubt will simply ignore; it has been far more convenient since the presidential election to blame everyone in sight for Hillary Clinton’s loss except for her and her campaign staff, who made countless mistakes, big and small, that helped Donald Trump win on Nov. 8.

But the most pointed question for those who participated in the Sept. 9 fundraiser is the significance of the event for the LGBT community and what it says about LGBT community members and their relations with people in the political class. To begin with, the ticket price alone – from $1,200 to $250,000 per plate  – means that an enormous segment of the LGBT community was effectively excluded from this event, even assuming those community members would have wanted to support Hillary through a donation of this sort; that would be even more true of the transgender community; while there is no good data on income and wealth in the transgender community, anecdotal evidence would suggest that very few transgendered people in New York could possibly have afforded $1,200 for a dinner and I know of no one in New York who could have afforded a donation of $250,000. It was actress Laverne Cox as mistress of ceremonies who provided the only transgender representation at the event, and of course, as MC, she would not have had to pay even the lowest donation amount of $1,200.

And so the overwhelming majority of the attendees at the Sept. 9 fundraiser were undoubtedly wealthy conventionally gendered gay white men from Manhattan, many of them lawyers and other high-salaried professionals; with few people of color and virtually no transgendered people at the event, the crowd would have been completely unrepresentative of the LGBT community of New York, the most diverse city in the United States, a city that is more than two-thirds people of color.

The history of LGBT legislation at the state level has shown that the concerns of the most marginalized members of the LGBT community in New York are not and have never been a priority for the privileged few who have access to the state’s political class. Gov. Andrew Cuomo made enactment of New York’s marriage equality law a priority of his first term while the Gender Expression Non-Discrimination Act (GENDA) languished in the state Senate, completely unmentioned by the governor even in his speeches at the Empire State Pride Agenda’s fall dinners in 2014 and 2015 – despite the fact that GENDA was ostensibly ESPA’s top legislative priority after enactment of the marriage statute. And the Dignity for All Students Act – the intention of which was to prohibit discrimination and bias-based harassment in public schools throughout the state  – was rushed through the state Senate in June 2011 only as a sort of consolation prize for the LGBT community in the wake of the initial defeat of the marriage equality bill in the Senate the previous December as well as the defeat of GENDA in committee, even though DASA would potentially help far more LGBT people than same-sex marriage rights as well as helping queer youth, among the most vulnerable members of the LGBT community.

The issue of access to members of the political class was no more sharply thrown into high relief than on 4 October 2000, when Paul Schindler interviewed Hillary Clinton for Lesbian & Gay New York (LGNY), now known as Gay City News (GCN) (Paul Schindler, “Hillary Clinton Talks to Paul Schindler, 2000,” Schindler City, 7 September 2007). Prior to the interview, Schindler had called me up and asked me for suggestions for transgender-specific questions that he might ask the candidate for U.S. Senate, and I suggested that he ask Hillary if she would support inclusion of gender identity and expression in the Employment Non-Discrimination Act (ENDA) and the federal hate crimes bill, which he did, as well as referencing the New York State hate crimes bill that passed the state Senate in June 2000 and was signed into law by Republican Gov. George Pataki in July 2000.

When asked, “Have you the opportunity to get feedback from members of the transgender community?” (as opposed to non-transgendered gay and lesbian people), Clinton responded to Schindler, “Yes, we have. Not as much or as frequently but some. I have a few transgendered contributors of some significance. So yes, we have gotten feedback.” When asked if Clinton would support transgender inclusion in ENDA, she responded, “I don’t see at this point that would be in the best interest of moving the agenda forward.”

Schindler then followed up by saying, “One of the things that the transgender community points to is that, for example, on hate crimes in New York State, the entire coalition for hate crimes held out to have gays and lesbians included in it. We would have had a hate crimes bill in New York long ago if it had only been for religion and so forth. But everyone hung tough on that. But what the transgender community is saying now is ‘Wouldn’t that approach be appropriate for them as well?’ In other words, don’t do it piecemeal, include everybody and then move forward.”

Clinton’s responded, “Well, no one who’s a leader in the gay and lesbian community has asked me to do that. I think there’s an understood recognition of the political reality. So for me it’s a priority to try to get ENDA passed, which is what I will work on.”

The Senate candidate’s answer to the editor’s statement her is highly revealing. Why should Clinton’s support for transgender inclusion in federal legislation be dependent on what gay and lesbian community members ask her? And how is having a few ‘transgendered contributors of some significance’ evidence of broad-based support from the transgender community? Significantly, Clinton’s suggestion that contributions from a few wealthy donors somehow confirmed the transgender community’s support for her in the absence of any other evidence of such support was very much in keeping with her attitude to other communities as well: personal connections with prominent members of various Democratic Party constituencies – elected officials and wealthy donors in particular – are taken as evidence of deep and abiding connection with the communities as a whole. Clinton’s failure win African Americans and others in Wisconsin, Michigan and Pennsylvania proved crucial to Donald Trump’s victory in those states, which gave him a majority of electoral college votes despite her winning the popular vote nationwide by more than two million votes.

And so the LGBT ‘community’ fundraiser for Hillary Clinton at Cipriani on Wall Street in Sept. 2016 was an ironically apropos representation of her relationship with the community over the course of her entire career: an entirely artificial event with access based on wealth and class privilege, with only token transgender inclusion and no attempt to make a real connection with members of the LGBT community beyond a tiny elite of unrepresentative gatekeepers; the event was as inauthentic as the candidate herself and as ineffective as her campaign.