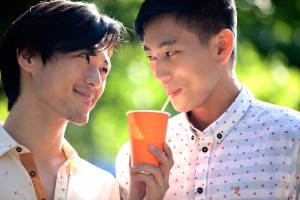 “Front Cover” is a love story of a very different kind. Depictions of complex LGBT or Asian characters in film is unusual and depictions of LGBT/queer Asians and Asian Americans is rare; even rarer is the depiction of a romantic relationship between two Asian men who are fully realized complex characters. Ray Yeung’s new film represents a real breakthrough, the most complex and compelling gay Asian love story that I’ve seen on the screen since Stephen Frears portrayed a torrid romance between a white working class Londoner and the son of Pakistani immigrants in “My Beautiful Laundrette.” Rather like the 1985 Frears film, “Front Cover” looks at the complexities of race, ethnicity and sexual orientation; but unlike “Laundrette,” which brings a white working class British bloke into the world of a prosperous Pakistani immigrant family, Yeung’s film depicts a romantic entanglement between two gay Asian men. Jake Choi is Ryan Fu, an out-and-proud gay Chinese American New Yorker who is deeply ashamed of his Chinese heritage; and James Chen plays Qi Xiao Ning, a closet queen from Beijing who is intensely proud of being Chinese; both actors effectively bring these complex characters vividly to life. Ryan is assigned to ‘style’ the famous Chinese actor for an important photo shoot by his neurotic, high-strung and culturally insensitive Italian boss, Francesca, played with aplomb by the Italian actress Sonia Villani. After an explosive confrontation between Ryan and Ning, they agree to try to work together on the photo shoot, in the course of which a blow-up with the racially insensitive photographer and his assistant bring Ning and Ryan together for the first time. Young then introduces Ryan’s immigrant Chinese parents: Elizabeth Sung as Ryan’s mother Yen gives the stand-out performance among the secondary characters; she and Ming Lee as Ba (Ryan’s father) are both the comic relief in “Front Cover” and the source of some of the most poignant moments in it. A sizzling sex scene follows the trip to see Ryan’s grandmother on Staten Island, succeeded by tender romantic moments that are the calm before the next storm, when Ning discovers that a Chinese magazine has published photos of Ryan and Ning together that could destroy his acting career in China unless Ryan publicly denies the very true report that the two are romantically involved. In less skilled hands, this scenario could easily have gone off the rails, but Ray Yeung’s superb script, plotting and direction lead to a realistic and credible resolution to the conflict which is as much an internal one for Ryan as an external one with Ning. 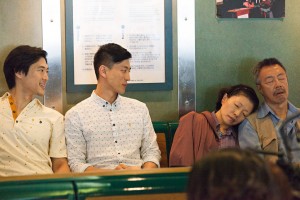 While “Front Cover” dramatizes what theorists might call ‘multiple oppressions’ through what is effectively an intersectional lens, the film is anything but a dry treatise on intersectionality or an exercise in preachy moralizing about racism or homophobia, as Ray Yeung brings this story alive, animating richly complex characters and conflicts with a nuance and subtlety rare in treatments of gay Asian lives. Part of the reason for the success of this film is that it is informed by Ray Yeung’s lived experience as an openly gay Chinese man from Hong Kong. To that extent, “Front Cover” stands in stark contrast with stereotypical depictions of Asian and Asian American men as buck-toothed coolies and subservient laundrymen or their latter-day successor, the dorky sexless Asian computer nerd who never gets the girl, much less the boy. In the course of the film, the proudly Chinese closet queen and the potato queen running away from his Chinese heritage both learn from each other what neither on his own had been able to figure out about himself or the world before their explosive encounter. 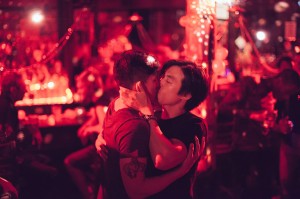 The Reel Affirmations film festival will screen “Front Cover” at tat the HRC Equality Center (1640 Rhode Island Ave. NW) in Washington, D.C. at 7 and 9 p.m. on August 19. For more info. about the film, go to FrontCoverthemovie.com.

This review was published by the Washington Blade as “Unlikely gaysian romance” (8.19.16).