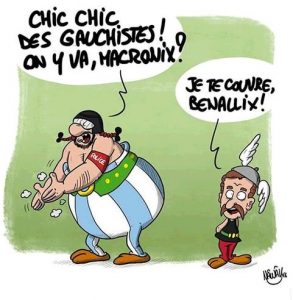 Emmanuel Macron won the presidential election in May 2017 in good part because his opponent was the right-wing extremist Marine Le Pen, the candidate of the far right-wing Front National and daughter of the party’s founder, the notorious xenophobic bigot Jean-Marie Le Pen. The high spirits and popularity of Macron’s early months — culminating in the president’s appearance at the World Cup and celebration with the victorious French team on the field of glory in Moscow — have since given way to disappointment, disillusion, scandal and outright criminality, the ‘Affaire Benalla’ revealing Macron to be the Nixonesque figure he is: arrogant, insular, suspicious, dishonest, paranoid, conniving and utterly without scruple. It is against this backdrop that the French president’s self-inflicted shot in the foot in Copenhagen in August 2018 takes on significance beyond what otherwise might be a minor incident in the history of his cinquennat. 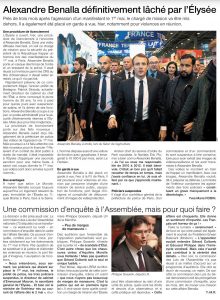 On August 29, Macron gave a speech to a gathering of the French community in Denmark, ostensibly about the Danish model of ‘flexisécurité.’ In the course of his speech in Copenhagen, the French president declared, “Il ne s’agit pas d’être naïf; ce qui est possible est lié à une culture, un peuple marqué par son histoire… Ce peuple luthérien, qui a vécu les transformations de ces dernières années, n’est pas exactement le Gaulois réfractaire au changement~!” (It is not a question of being naive; what is possible is linked to a culture, a people marked by its history … This Lutheran people, who have experienced the transformations of recent years, are not exactly like Gaul who are resistant to change) (“Macron, le ‘Gaulois réfractaire au changement’ et l’identité,” Agence France Presse, 29 August 2018).

Needless to say, an elected official who compares his own people unfavorably to another is unlikely to enhance his popularity by doing so, especially if done on foreign soil; and Macron’s ‘Gaulois réfractaires au changement’ line provoked a Twitter storm of images of Gauls drawn from the popular cartoon strip, “Astérix et Obélix,” two lovable Gallic goofballs from ancient times. 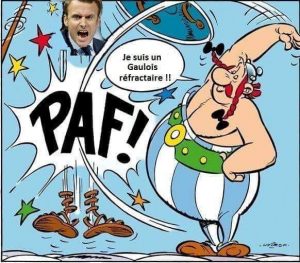 When challenged back in France, Macron reasserted his love for the French people and tried to pass off his comments about them being ‘recalcitrant Gauls’ as ironic humor. And the uproar over ‘Gaulois réfractaires’ will be seen rightly as a rather minor incident, a mere bump in the road in comparison with the profoundly damaging Affaire Benalla; but I would like to suggest that it tells us far more about Macron’s thinking and the character of his administration than may meet the eye. So at the risk of making a Gaulish mountain out of a Danish molehill, I’d like to suggest a few possibilities here. Macron’s description of the Gauls as ‘réfractaire au changement’ betrays the president’s ignorance of ancient Gaul and the remarkable adaptability of the Gauls before and after the Roman conquest; in fact, the Gauls changed considerably over time and not only in response to the invasion of Julius Caesar and the subjugation of Gaul to Roman rule. Contrary to Macron’s suggestion, pre-Roman Gaul had a complex and sophisticated society in which women had more rights and higher status than when in ancient Greek and Roman society. In the Celtic culture of pre-Roman Gaul, Druids led a complex spiritual culture that was at least the equal of Roman society’s in many respects and perhaps its superior in some. In his writings on Gaul, Julius Caesar noted that some Gauls were polyandrous, with some women have multiple husbands just as some men were polygamous and had multiple wives. Celtic Gaulish society had a spiritual culture similar to that in Celtic Britain and Ireland with a Druid culture. Julius Caesar completed the Roman conquest of Gaul between 58-49 BCE and if anyone acted like uncivilized ‘savages,’ it was the Romans, who may have killed as many as 500,000 Gauls and sold 500,000 or more into slavery. Given that violence — which some have likened to genocide — it is remarkable how relatively harmoniously Roman and Celtic cultures blended following the subjugation of Gaul as the Roman conquerors established cities along Roman lines such as Lugdunum (Lyon, founded in 43 BCE by Lucius Muatius Plancus), the capital of the Roman province of Gallia Lugdunensis. 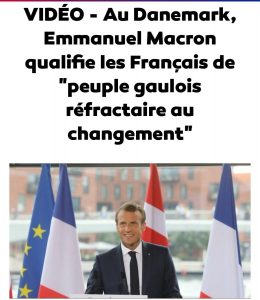 Macron’s reference to the ‘recalcitrant Gauls’ resistant to change seems to cast him as a latter day Julius Caesar, a foreign conquerer subduing the indigenous people of Gaul (i.e., France) — hardly a role suitable for an elected président de la republique~! And the implication is that his ‘subjects’ are primitive rubes who need his firm hand as he pursues the process of ‘civilizing’ them — presumably by force if necessary. Given the frequent references to Macron as ‘Jupiter — a godlike figure deserving of veneration — any suggestion of the president as a latter day Jules César would seem to undercut whatever feeble attempts he’s made to cultivate a more relaxed image as ‘Manu,’ the regular guy next door who is hip and streetwise and totally approachable; Julius Caesar was not approachable and as any French schoolboy or schoolgirl would know was assassinated by his colleagues for his imperial pretensions and attempts to establish himself as a tyrant in Rome.
As president of the French republic, Macron lives in the Élysée — a palace at least as grand and far more elegant and impressive than Buckingham Palace; and in another connection with the Roman world of Julius Caesar, the Élysée is just off the Boulevard des Champs-Élysées — literally, the ‘Elysian Fields’ — named for the Greco-Roman version of Valhalla where victorious warriors go after death on the battlefield. 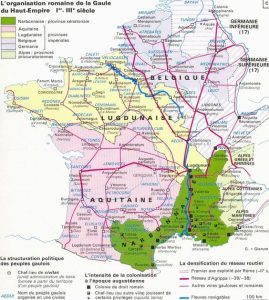 While Roman Gaul was undoubtedly vastly superior to pre-Roman Celtic Gaul in engineering and architecture, roads and public works, agriculture and the ability to generate wealth, it was not obviously superior in terms of religion or spiritual life and was possibly inferior insofar as it was highly undemocratic and gave women far fewer rights and virtually no opportunities for political participation. Nevertheless, the Gauls did in fact adapt and more thoroughly perhaps than in any other Roman province outside of Italy, creating a blended culture that gave way to a very different medieval society after the fall of the Western Roman empire and the Germanic Frankish tribes conquered Roman Gaul and established the foundations for modern France (named of course for the Franks).
If Macron’s comments in Copenhagen brought up unfortunate images of the French president as a latter day Jules César, even weirder was the admiration Macron expressed for the ‘peuple luthérien’ of Denmark vs. the pagan Gauls; clearly, anyone who knows anything about European history knows that the Christianization of Gaul began before the fall of the Western Roman Empire in 476 CE while the Christianization of Denmark did not begin until the ninth century, at least 400 years later. But aside from the oddity of comparing Gaul or France in Roman (or even pre-Roman) times to Denmark in the Middle Ages, the reference to the Danes as Lutheran is odd because Denmark (like France) is now really a post-Christian country; the Lutheran Church is nominally the state church, but most Danes (like most Frenchmen and women) do not regularly attend church services and tend at most to be Christmas Christians, regarding church as a place to go for baptisms, marriages and funerals and major holidays. Whether Denmark’s conversion to Lutheranism in the 16th century as the Protestant Reformation swept northward out of Germany and through Scandinavia had anything to do with the Industrial Revolution that transformed Denmark’s economy at the end of the 19th century and the early 20th century is a good question; but Catholic France went through the Industrial Revolution earlier than Denmark. And contrary to Max Weber’s thesis of the ‘Protestant work ethic,’ it was Catholic Flanders and Florence that created banking and modern capitalism, not Protestant Germany or Scandinavia. 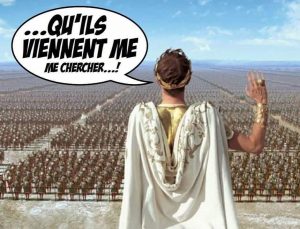 Macron’s pose as some sort of Søren Kierkegaard, a sage source of wisdom rooted in Denmark’s Lutheran heritage, was especially odd for someone who is neither Protestant nor in the least bit Scandinavian; if anything, what distinguishes Scandinavian culture is the extreme egalitarian esprit in which no one is allowed to put on airs; even Scandinavian royalty is remarkably down-to-earth and even bourgeois compared with the queen of England and the House of Windsor. No Danish prime minister could possibly get away with indulging in the imperial style of the current French president. Nor does Macron seem to have any real understanding of what he calls ‘le modèle danois.’ If Macron was referring to military security, Denmark is a member of NATO without pretensions to ‘grandeur’ and great power status that France still indulges in under Macron as under all of his predecessors as president of the Fifth Republic. Conversely, if Macron was referring economic policy, while it is true that Denmark like the other Nordic countries is cutting back on its generous cradle-to-grave welfare state, even the right-wing parties in Denmark have not pushed the aggressive anti-labor neoliberal economic agenda that Macron has in France.
Pace Macron, it is not that the French “détestent les réformes” but rather that there is real resistance to aggressive corporate neoliberalism barely disguised as reform. “C’est un pays très dur à réformer” only for those who are pushing a false notion of reform. And so I say, vive la Résistance~! Contre ce Jule César, je suis Gauloise. 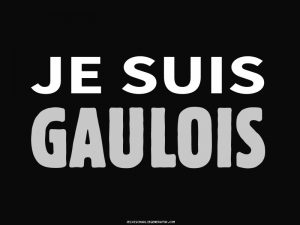 Pauline Park is a New York-based human activist who lived in Paris for six months in 1992 and has written widely on politics and policy; she did her Ph.D. in political science at the University of Illinois at Urbana-Champaign and wrote her dissertation on the Maastricht Treaty on European Union.