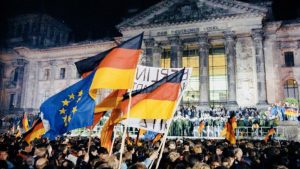 Berlin: living a moment in history on the Tag der deutschen Einheit
(3 Oktober 1990)
by Pauline Park

Germans celebrated the Tag der deutschen Einheit on 3 October 2018 with considerable less enthusiasm than they did the original Day of German Unity back in 1990; twenty-eight years later, many might not recall the extraordinary euphoria that Germans from both East (‘Ossies’) and West (‘Wessies’) felt nearly a year after the Berlin Wall fell in November 1989; in that moment, everything seemed possible. Now, with right-wing nationalism and xenophobia on the rise, there is much to concern us about politics in the most important country in Europe. Germany is the cockpit of Europe and is the one country without which an explanation of European history since at least as far back as the Protestant Reformation is simply impossible.

I can only claim to have been present at one major moment of world history and it was ‘Tag der deutschen Einheit’ on 3 October 1990, though I did not anticipate my participation in the historic festivities when I set out for Berlin in September of that year. How I came to be in that enormous crowd is a bit of a story.

When I began my Ph,D, in political science in August 1988, I thought I would write my dissertation on French foreign policy; but by the end of my second year, I realized I was much more interested in the European Union, which was being formed out of the European Community. And so it seemed to me that I should focus on learning or relearning three languages that along with English were of prime significance in the old EC and the new EU: French, German and Italian; happily, these also happened to be the three great languages of opera, one of my abiding passions~!

German was my first foreign language, which I took in junior high and high school, though I learned little because my teachers were not very good and my fellow classmates for the most part were totally unserious about learning the language. German was also my grandmother’s first language and my mother was confirmed in German, so there were Familiebeziehungen involved as well as academic and professional interests. French was my second foreign language and I took four semesters as an undergraduate at the University of Wisconsin-Madison, but I had forgotten most of my French by the time I was ready to begin my Doktorarbeit. I loved Italian but had never studied it. So I began four semesters of German and four semesters of Italian at the University of Illinois at Urbana-Champaign, in classes that included more undergraduates than graduate students.

I was fortunate enough to win a Deutsche Akademische Ausstausch Dienst (DAAD) fellowship to study German at the Goethe-Institut, but my adviser insisted that I do the two-month intensive language course in Mannheim because it was in the summer and I could still work as his research assistant in the fall semester 1990; but I was determined to study in Berlin during fall semester 1990 even if it meant giving up my research assistantship and instead taking a less interesting and less prestigious teaching assistantship in the spring semester of 1991. In the end, it was my choice and my adviser relented, and so I flew to Berlin in September 1990, my first time in Germany.

I had lived in Europe before — in London for two years from 1981-83 — but of course England was an English-speaking country and Germany would be a linguistic as well as a cultural challenge. Fortunately, the Goethe-Institut has some of the best German-language instruction in the world and I had a very good teacher at the Goethe-Institut as well as classmates who were seriously committed to learning the language. And luckily, the Goethe-Institut organized ‘homestays’ as part of the course — a good thing, given that the students in the dormitory at the Goethe-Institut seemed rowdier than the others and I most likely would have had to share a room with someone else. Instead, I spent two months living in an apartment buildinga few blocks south of Nollendorfplatz in Schöneberg — a fashionable neighborhood that also happened to be the ‘gayborhood’ (though I did not know that before arriving). My landlady was a tall, blonde German woman and like so many German women, independent, businesslike and rather severe. I had my own room and it was a beautiful room with hardwood floors, sparsely furnished but full of light. A middle-aged man from Togo who was also studying at the Goethe-Institut occupied another room.

I became pals with a young Californian named Steve and a francophone from Switzerland named Pierre and we spent a fair amount of time together. I spent little time with my Togolese roommate, though we had a few very interesting conversations sitting around the kitchen table while our landlady was out. But as October 3 approached, my Togolese roommate and my Swiss friend and I decided to go to the public festivities together.

Now what I was struck by was the fact that the (West) German government called the great day the ‘Tag der deutschen Einheit,’ which literally means ‘Day of German Unity’; it seemed a deliberate attempt to avoid the use of the term ‘Wiedervereinigung,’ which is what Germans call the reunification of Germany engineered by Prussia’s ‘Iron Chancellor,’ Otto von Bismarck. If Helmut Kohl, thought of himself as a latter-day Bismarck, the chancellor of the Federal Republic of Germany (‘FRG’ in English, or ‘BRD’ in German for ‘Bundesrepublik Deutschland’) deliberately avoided use of the term ‘Wiedervereinigung’ and instead opted for the rather anodyne ‘Tag der deutschen Einheit,’ perhaps to avoid needlessly alarming Germany’s neighbors who had been subject to German occupation under the Nazi Third Reich.

And so my Swiss and Togolese friends and I set out to participate in the festivities; we were hoping to get into a church service in the afternoon that was presided over by the Bundespräsident Richard von Weiszäcker, a man of the highest reputation in Germany who had spent much of his presidency talking about threats to the environment. But the afternoon church service was a closed affair and we left the church disappointed that we could not enter; as we were coming down the stairs outside the church, we passed the president of the republic and I came within inches of the distinguished Herr von Weiszäcker, a small thrill in and of itself.

The only event open to the public was the big one in the Tiergarten, the Central Park of Berlin; and so just before midnight, my friends from Switzerland and Togo and I passed through the Brandenburg Gate as chimes were struck and fireworks went off; it was an unforgettable moment that I still find thrilling to think of 28 years later. The crowd was the largest I had ever been in, estimated at somewhere between two to three million people, mostly German but foreigners and tourists, too. The oddest moment was when we were approached by a Vertriebener, a German who believed that Poland should return to Germany the lands it lost after World War II — hardly a realistic prospect, given that those lands constituted about half of all the territory of postwar Poland. 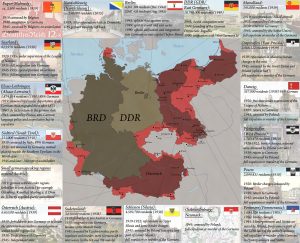 The Vertriebener handed us some propaganda (in German) and seemed oblivious to the fact that two of use were people of color and unlikely to be German citizens; we found the whole encounter rather amusing. But the Vertriebener soon disappeared back into the enormous crowd and we advanced to enjoy the fireworks as the chancellor and the president gave speeches and the crowd grew by the minute.

The biggest challenge was actually getting home and I still remember October 3 as one of the most exhausting of my life. Because the crowd was so enormous, the U-Bahn (city subway) and S-Bahn (suburban train) stations quickly filled up, so we ended up having to walk from the eastern end of the park to the western end, where the Goethe-Institut was located, before our Swiss friend went his way and my Togolese roommate and I made it back to the apartment in Gleditschstraße in Schöneberg. I was utterly exhausted, bone weary, but felt enormously privileged to have been able to witness one of the most important moments in German and European history. And even if the euphoria of that day 28 years ago has long ago given way to disillusion in both former East and West Germany, it remains a a moment of  extraordinary importance for Berlin, Germany, Europe and the world.

Pauline Park is a writer and activist living in New York; she did her Ph.D. in political science at the University of Illinois at Urbana-Champaign.