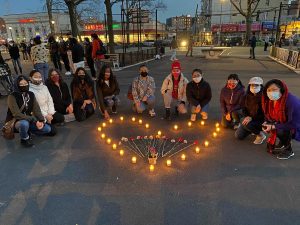 Dozens of people in the Asian-American community — including LGBTQ individuals — gathered at Moore Homestead Playground in Elmhurst, Queens, on March 21 for a vigil honoring the six Asian women who died in shootings that left eight people dead at three spas in Atlanta earlier this month.

Carolyn Tran, running to replace out gay term-limited City Councilmember Daniel Dromm in Elmhurst and Jackson Heights, organized the event to demand justice and denounce the uptick in violence against Asian-Americans.

The rally came five days after Robert Aaron Long, a 21-year-old gunman, faces multiple murder charges in connection to the shootings. The attacker allegedly told authorities he had a “sexual addiction” and set out to kill the individuals to stop his “temptation,” but many have stressed that the killings were representative of the larger wave of anti-Asian attacks across the country. The Fulton County Medical Examiner’s Office in Georgia released four out of sex of the victims’ names; Hyun Jung Grant, 51, Soon Chung Park, 74, Suncha Kim, 69, and Yong Yue, who was 63 years old.

One of the vigil’s speakers, Pauline Park, a Korean-American LGBTQ activist and president of the board of directors for Queens Pride House, told Gay City News the shooting highlights existing disparities facing the LGBTQ Asian community, such as joblessness, anti-Asian bias, and immigration issues. These issues, she said, can make individuals even more vulnerable to violence and harassment.

“Lots of trans women end up in the sex industry either by choice, because they were trafficked, or because of pervasive discrimination and limited employment opportunities,” said Park, who is a queer transgender woman. She further explained that Asian immigrants, both cisgender and transgender, often face economic hurdles and immigration barriers that lead them to industries lacking sufficient protections.

The recent attacks also brought fresh attention to the long history of racial and gender violence against Asian communities in the US. When the pandemic started, former President Donald Trump blamed Asian individuals for the mounting coronavirus cases and he targeted the community with derogatory and racist language. But Park also stressed that anti-Asian sentiments, along with misogyny, are rooted in policies such as the Page Act in 1875, which imposed a ban on Asian women due to xenophobic fears of sexual immorality.

“[That was] the very first legislation enacted by Congress to exclude Asians, specifically Chinese women who were thought to be engaged in sex work,” Park said. “The insidious assumption that all trans women are sex workers was also the assumption that white people had about Chinese immigrant women in the 1800s.”

All of these issues contribute to a culture of silence among Asian American communities, Park said. She said many racist incidences against Asian Americans often go unreported due to a lack of media attention and recording of these crimes. While this can make it even more difficult for Asian-Americans to seek help when they need it, she said it’s just as common for people within the community to “defer to authority.”

“The police are authorities,” she said. “So it’s probably inevitable that we will hear calls from community leaders for more policing.”

Since the shooting occurred, the NYPD’s Counterterrorism Unit has deployed more police to Asian-American communities. Andrew Yang, a former presidential candidate who is now seeking to become the first Asian-American mayor in New York City, called for more funding of the NYPD’s Asian Hate Crimes Task Force during a protest in Chinatown. Some advocates are concerned that politicians are using the attacks to further their own political campaigns.

“[Yang] is not a progressive,” said Park, who noted she is not casting a ballot for Yang in the upcoming Democratic primary election. “We’re going to see Andrew Yang try to use this to advance his own mayoral candidacy.”

“We are concerned that many of those calling for action in this moment have and will continue to endorse violence towards Asian sex workers, massage workers, and survivors,” the organization said in a statement. ” We understand the pain that motivates our Asian and Asian-American community members’ call for increased policing, but we nevertheless stand against it.”

The group added, “Policing has never been an effective response to violence because the police are agents of white supremacy.”

A string of anti-Asian attacks have also occurred in New York City as of late, including a case involving an Asian-American mother who was attacked at a protest condemning these crimes. While many Asian Americans are still on edge, others are not shocked by these incidents.

“There is a real fear of physical violence,” Park said. “Hardly any Asian friends of mine are surprised because violence against Asian Americans, especially Asian immigrants, has been a feature of Asian American life.”

This news story first appeared on the Gay City News website on 24 March 2021.