Asian Americans & the Lessons of the Atlanta Massacre (3.21.21)
Pauline Park
at the AAPI vigil in Elmhurst
21 March 2021 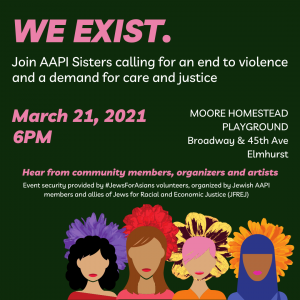 I would like to thank Carolyn Tran and all those who helped organize this important event. And I will say that I join with you today in anger and sorrow and resolve: anger at the hatred that took the lives of eight innocent victims of hate — seven of them women and six of them Asian American women — in the Atlanta area last week in what is being called the ‘Atlanta Massacre.’  Sorrow for the loss of innocent lives: eight people taken from us for no legitimate reason, eight human beings with hopes and dreams and challenges just like the rest of us. And resolve that we should take this horrific tragedy and turn it into a catalyst for real change in this country.

In the first press conference the Cherokee County sheriff’s office held after the killings, Captain Jay Baker infamously said of the murderer Aaron Robert Long that he was “just having a bad day.” Well, the eight people he murdered had a far worse day — that turned out to be the last day of their lives — and the sheriff’s captain who could try to excuse or explain away these murders by trying to cast the murderer in a more sympathetic light was just demonstrating his own white privilege and male privilege; it turns out that he even posted comments on his own Facebook page that tried to link the Corona virus to China with Trump-style rhetoric — the kind of rhetoric that has incited an almost unprecedented wave of violence against Americans of Asian descent since the onset of the pandemic a year ago this month. 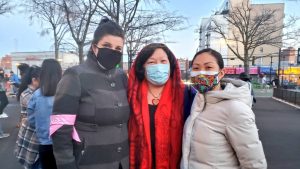 I say ‘almost’ unprecedented because those Americans who know the history of Asian immigrants in this country know that there’s a long history of violence against Asians and Asian Americans that is only being widely reported in the media in the wake of the Atlanta massacre. While African Americans have been routinely subjected to lynching and racial violence since slave ships brought the first Africans in chains to the North American continent over 400 years ago, immigrants from Asia have also been subjected to racialized violence for well over a century and a half — and in fact, the single worst lynching in American history was the lynching of 19 Chinese immigrants by a white mob in Los Angeles on 24 October 1871. Why is it that so few Americans — including too few Asian Americans — know this long history of racial violence against Asian Americans and Pacific Islanders? As APIs, we’ve been mostly left to fend for ourselves, too many of us hoping that we could assimilate as a ‘model minority.’ But the Model Minority Myth hasn’t saved us from discrimination, abuse, harassment and violence, as last week’s events in Georgia have proven beyond the shadow of a doubt; instead, the Model Minority Myth has only served the interests of the white establishment to pit APIs against other communities of color when the only way forward is to forge bonds of solidarity with other communities of color.

And just as we need to reject the Model Minority Myth, we need to question the notion that more police will protect us; in fact, more policing is not the answer, especially not in a city in which the NYPD have routinely engaged in police brutality against people of color, including APIs and LGBT/queer people of color; the NYPD’s $6 billion annual budget is larger than that of the national military budgets of many foreign countries. Nor will hate crimes legislation save us; in fact, New York has a state hate crimes law that includes race and ethnicity but that statute hasn’t done anything to prevent this latest wave of hate crimes against us. Instead, we need to bring a progressive feminist intersectional analysis to bear on the current crisis. 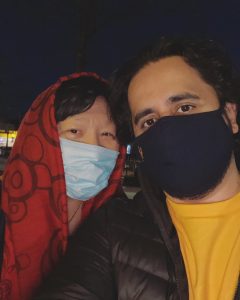 And as a progressive trans feminist of Korean birth, I would argue that we have to understand that the six Asian immigrant women who were murdered in Atlanta lived — and died — at the intersection of multiple oppressions of race, gender, sexuality, class, nationality and immigration status. While their murderer made clear his racial animus in his on-line rants against China and Asians, we also have to understand that women who work in massage parlors do so on the margins of the sex industry and this is yet another compelling argument to decriminalize sex work of all kinds, so I would urge members of the New York State Senate and Assembly to support Assembly Member Ron Kim’s bill that is supported by the coalition organized by Red Canary Song to decriminalize sex work under state law.

Let me conclude by acknowledging that the way forward will be a difficult one and there is no easy answer to the miasma of hatred and violence that we now find ourselves in. I would argue that we must set for ourselves the goal not only of educating law enforcement and the criminal justice system about anti-Asian hate but of transforming that system which all too often delivers only criminal injustice to APIs and other people of color as well as lesbian, gay, bisexual, transgendered (LGBTQ) people and members of other marginalized groups in this city, this state and this country. Our goal must be nothing less than to transform society so that racialized, sexualized and gendered violence against any group becomes inconceivable. Jackson Heights, Elmhurst, Woodside and Corona are the most diverse neighborhoods in Queens — the most diverse county in the United States — and a demographer recently determined that this is the most demographically diverse spot on planet earth; here in Queens, we take pride in our diversity, but we need to make diversity more than just a slogan for politicians to spout in campaign speeches; as we stand here on the Moore Homestead playground, let’s commit to making this city, this state and the entire country a safe homestead for everyone, and that must involve the radical pursuit of justice for all. Thank you.