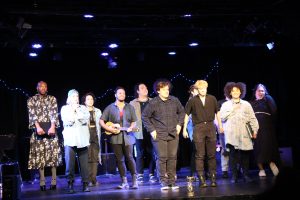 The Civility of Albert Cashier
by Pauline Park

I have largely avoided the theater during the pandemic but I made an exception to see “The Civility of Albert Cashier” at the Players Theater in Manhattan’s Greenwich Village on May 29 — as much to see my friend Joe Stevens as to see the musical itself and he was in fact on stage throughout accompanying many of the songs with his guitar.

“Civility” is the first off-Broadway show with an all-transgender cast, which makes this theater piece historic in and of itself; but its value goes far beyond its historical moment: it is a delightful musical with a wonderful score carried off with aplomb by a diverse cast that included African American and Asian American members on the afternoon I saw it.

“Civility” is based on the true story of someone who might have been called a ‘passing woman’ in the nineteenth century but who today most likely would identify as a ‘transman’: born in Ireland in 1843, Jennie Irene Hodgers was assigned to the female sex and the feminine gender at birth, emigrating from Clogherhead in County Louth to Belvidere in Illinois. Enlisting in the 95th Illinois Infantry in 1862 as Albert D.J. Cashier, he was honorably discharged in 1865 — one of at least 250 female-bodied soldiers who served in the Civil War, according to historians. Cashier had no access to the hormonal and surgical interventions that contemporary trans people have and his anatomical sex was discovered when he was taken to the Watertown State Hospital for the Insane in 1914; but when the veterans’ pension board investigated Cashier for fraud, his comrades from the 95th came forward to attest to his courage in combat and the board decided in 1915 that he should continue to receive his war pension for the rest of his life, which sadly was only nine months longer.

Cashier’s compelling life story is told compellingly in this musical with music by Joe Stevens and Keaton Wooden and book by Jay Paul, with lyrics by Stevens, Keaton and Wooden, with musical direction by Nicole D’Angelo. Few facts are known about the historical figure and so Stevens, Keaton and Wooden fill in Albert Cashier’s life with various incidents, creating a romance between Albert and the unfortunately named Jeffery N. Davis — who gets a lot of kidding from his Union soldier comrades for his name — making the already very queer theater piece even queerer with its hints of Shakespearean gender confusion à la “All’s Well That Ends Well” and “Twelfth Night.” In contrast with so many Broadway musicals today, “Albert” has music that is compelling and at times even moving: “Bullet in a Gun” and “I’m Alive” help create a lively character and “Brothers in Arms” is a rousing call to martial action in support of the Union cause. “What Will You Fight For?” makes the fight more personal for Albert and “Perfect Home” is a plea from Jeffery to form an unconventional marriage that Albert rejects because it does not comport with his internal sense of gender identity. The young queer cast acquitted themselves well with skillful acting and singing, with the sole exception of “Chicago,” a song whose high notes taxed the cast member singing the role of John Curtis; but Salem Corwin could not be faulted for his ingratiating acting. The two standouts were Achilles Mulkey as the young Albert and Kristyn Michele as the aging veteran; Mulkey captured the spunk of the young Albert and brought the songs he sang vibrantly alive; Michele delivered the most nuanced and mature performance of the production, shaping the older Albert’s vocal lines with moving delivery. Rounding out a wonderful case were Lily Ali-Oshatz, Nikomeh Anderson, Stevie Jae Davis, Fin Gagnon, DeShawn Aaron Jenkins, Dee Luu, Mark Mendes Muñoz, Imani Russell, Joshua Simpson, Parker Wallace, Dexter Warren and Jace n’ Ziev.

To my mind, this musical compares favorably to most of the Metropolitan Opera’s recent efforts to make opera more ‘relevant’ by staging new works such as “Fire Shut Up in My Bones” — which first premiered at Opera Theatre of St. Louis in 2019 before moving to the Met in September 2021. The Met’s general manager Peter Gelb acknowledged that his decision to open the 2021-22 season with the new opera by Terence Blanchard was informed by the Black Lives Matter movement; based on Charles M. Blow’s memoir, Blanchard’s opera tries to tell the New York Times columnist’s genuinely compelling story but with music that falls short of being compelling. In contrast with Blanchard’s rather dreary Sprechgesang — which rarely rises to the level of the genuinely lyrical — “Civility” provides a delightful and often moving musical and dramatic experience. I would take the genuine lyrical inspiration of “Brothers in Arms” and “I’m Alive” any day over the pretensions of Blanchard’s recitative — unnecessarily and unfortunately ubiquitous in contemporary opera. I only wish small transgender community-based efforts such as “Civility” had even a fraction of the Met’s budget so that they could remunerate their cast and crew generously and afford promotional efforts that could bring in larger audiences. This run is over, but perhaps “Civility” will enjoy a well-deserved revival here at some point.