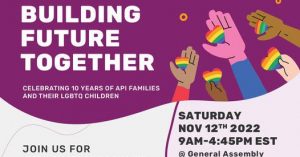 I would like to thank Clara Lee and the entire organizing committee for inviting me to help open this conference; I am deeply honored and humbled by the invitation. PFLAG has been one of the most important organizations in advancing acceptance of lesbian, gay, bisexual, transgender, queer and questioning people and especially youth in this country and API Rainbow Parents have played a uniquely important role in helping educate and inform Asian American and Pacific Islander (AAPI) parents and families on sexual orientation and gender identity while accepting parents like Clara Lee, Marsha Aizumi and Aya Yabe are shining examples of what parents can do to make this world a better place for their children and for all LGBT/queer people.

I’ve actually come out twice: my gay coming out when I was just turning 18 and my gender transition 18 years later. I was born in Korea and adopted by European American parents; they were Christian fundamentalists and I was precocious enough to realize that coming out to them would not have gone well. Growing up in an all-white neighborhood in Milwaukee, I was happy to find a certain amount of diversity as an undergraduate at the University of Wisconsin-Madison and then the startling diversity of London, where I lived for two years; going out in public for the first time presenting as a woman was one of the most liberating experiences of my life; but it would take another dozen or so years before I finally actualized my gender identity. After I transitioned, I co-founded Queens Pride House and Iban/Queer Koreans of New York; Iban/QKNY was in fact the first Korean-specific LGBT community based organization in this city; the following year, I co-founded the New York Association for Gender Rights Advocacy (NYAGRA) and was asked to lead the campaign for the transgender rights law enacted by the New York City Council in 2002.

So in considering the theme of this conference in light of my 28 years of activism and advocacy work, I would argue that ‘Building Future Together’ requires that we first examine the past and the erasure of people from API and AAPI history who were LGBTQ or in some important ways anticipated contemporary LGBTQ identities.

In 2011, I developed a presentation on “Proto-Transgenderal & Homoerotic Traditions in Asia & the Pacific” —which I know sounds rather like a dissertation topic — for the first ever Asian American & Pacific Islander pre-conference institute at Creating Change; the text of that presentation is available on my website (paulinepark.com); in it, I cite examples of same-sex love and non-heteronormative identities in pre-modern Asia and the Pacific; despite its title, the purpose of the presentation was anything but academic; in fact, I would argue it goes to the heart of what we are here for today. The greatest misconception in API communities here and countries in the Asia/Pacific region is that LGBT APIs are only queer because they’ve been hanging around white people too much. This ‘viral’ model of identity is deeply embedded in reactionary responses to LGBT people and LGBT rights in immigrant communities in this country as well as in the countries and cultures of our origin and the worst thing we could do is to play into it by buying into the notion of contemporary LGBT identity as a repudiation of our cultures of origin.

Last year, I gave this presentation to a class at Hunter College of the City University of New York (CUNY); not surprisingly, no one in this class on queer API identity and history had any familiarity with this pre-modern queer API history since it is taught almost nowhere in this country except in a few such ‘speciality’ courses; after the class, a student approached me to thank me for giving the presentation; he told me that he had emigrated to this country from Korea when he was 11 years old but when he came to a realization of his sexuality, he felt that he had to divorce himself from Korea and Korean culture in order to embrace his new identity as an openly gay man; after hearing my presentation, he told me that it changed his life because it made him realize that he didn’t have to repudiate his Korean heritage in order to embrace his identity as an openly gay man. And so the point of the presentation goes beyond merely intriguing and entertaining audiences with curious bits of ancient queer history; the real point is that we as LGBT/queer APIs must know the history of our predecessors in order to counter the narrative of LGBT and queer as foreign, white, Western, and even specifically North American; only in doing so can we reinsert ourselves in the governing narratives of our countries, cultures and communities of origin.

As William Faulkner famously said, “the past is never dead; it’s not even past.” Today, queer APIs face ongoing challenges of acceptance by their families and society as a whole, but such challenges are not merely personal ones; they cannot be fully understood apart from the history of our countries and cultures of origin. A perfect case in point is the neo-Confucian revolution that Yi Song-gye engineered in Korean society when he established the Joseon dynasty in 1392; taking the reign name ‘Taejo,’ the new king radically downgraded the status of women and imposed a Chinese model of patriarchy on Korean society which up until that point had been matrilineal (though not matriarchal) in organization — with profound implications for future generations of LGBT/queer Koreans.

I would argue that to create a better future, we must reimagine the past in order to re-envision community. The challenge in the context of a framework of identity politics is to utilize that framework to serve that purpose rather than to limit it: we cannot allow ourselves to be limited to a superficial celebration of ‘diversity’ without bringing about social justice and social change; the object must be nothing less than the radical transformation of our society into what the Rev. Martin Luther King, Jr. would call ‘the beloved community.’ As the Mahatma Gandhi — whose philosophy of non-violence inspired Dr. King — would say, we must be the change we want to see in the world; let us be that change and let us join together to make it.

Pauline Park is chair of NYAGRA, the New York Association for Gender Rights Advocacy (nyagra.com), a statewide transgender advocacy organization that she co-founded in 1998. She also co-founded Queens Pride House (a center for the LGBT communities of Queens) in 1997 and currently serves as coordinator of its transgender support group; and she co-founded Iban/Queer Koreans of New York in 1997 and served as its coordinator from 1997 to 1999. Park led the campaign for the transgender rights law enacted by the New York City Council in 2002. In 2005, she became the first openly transgendered grand marshal of the New York City Pride March. She did her B.A. at the University of Wisconsin-Madison, her M.Sc. at the London School of Economics and her Ph.D. at the University of Illinois at Urbana. Park has written widely on LGBT issues and has conducted transgender sensitivity training sessions for a wide range of organizations. She was the subject of “Envisioning Justice: The Journey of a Transgendered Woman,” a 32-minute documentary that premiered in 2008.